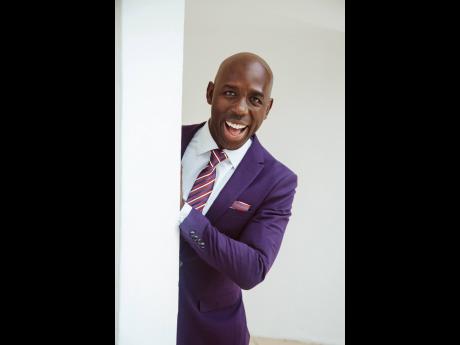 “It will be hilarious fun! Exclusive celebrity interviews and behind-the-scenes, international runway shows and features, politicians, supermodels, breakout stars, pop culture highlights, island magic and more,” shares a wildly enthusiastic Deiwght Peters on his newest TV show, Rolling with Deiwght Peters – from Jamaica to the World. The show will feature guests from across the world.

The one-hour variety show premieres exclusively on TVJ on Sunday August 9, at 4 p.m. The show’s cross-demographic appeal and decidedly feel-good, family-appropriate content makes the time compatible with its objective. “It will educate, inspire and positively energise the entire family to kick-start the week with a bang,” says Peters of his latest passion project. Fans will also be able to engage via social media – IG @deiwghtpeters.tv and @deiwghtpeters,.

The model mogul is having a spectacular run so far for 2020. Despite the global onslaught of the COVID-19 pandemic, his iconic Saint International model agency is still brewing mega-successes with its roster of supermodels and breakout stars. From supermodel Tami Williams, starring for Alebrta Ferretti; Nigerian breakout face Tomiwa for Miu Miu; Jannel Duncan for Balenciaga; Romaine Dixon for Fendi or Lawrence for Zara, the achievements are second to none.

Peters is still relishing his latest international accolade from fashion bible, British Vogue, that featured his 20 years of groundbreaking successes in a glowing tribute captioned, in part, ‘Inside the Jamaican model agency working for Gucci & Prada’.

Peters is known for his golden eye for model talent as he is for his impeccable sense of style, which can be characterised as refined yet edgy sophistication. This he will forcefully bring to the silver screen for Rolling with Deiwght Peters as he did his previous television expedition, The Deiwght Peters Show. His wardrobe will be drawn from his own extensive and expansive personal wardrobe with support from power style sources like the legendary Sophia Max Brown, Keino Willox’s Enigma Boutique and favourite celebrity designer New Jersey-based Jamaican Rick Bailey.

“I know my story of Saint to this point has all the ingredients of a New York Times bestseller and the making of a blockbuster movie script,” Peters, in his characteristic cool confidence, reassures fans.