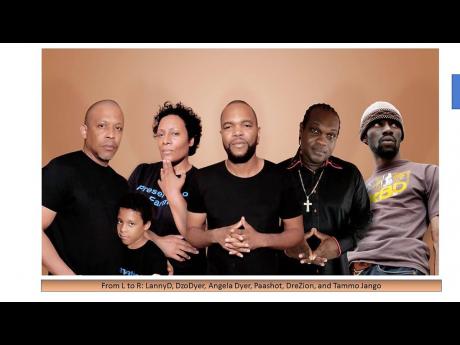 It is universally agreed that medical and healthcare workers are at the frontline of the COVID-19 pandemic, and should be given all the necessary support and appreciation as they risk their lives for others on a daily basis. Tribute songs have become part of the roll call as the entertainment industry celebrates the sacrifices of these warriors.

A project which started out as a family’s desire to create a Tik Tok video to show appreciation for the various categories of frontline workers transcended into a professionally produced song incorporating talents from both New York and Jamaica. It even has an element of reconciliation to add to the altruistic vibe, and the team is gung-ho about giving part of the proceeds from the single titled Frontline to charity.

“New York had it really bad during the peak of the pandemic and my mother is a nurse, and so too my mother-in-law. Both are retired, but were asked to come out and help during the onslaught. This issue of the frontline workers is greater than all of us and it’s only right that we take time out to acknowledge their efforts,” Lance ‘LannyD’ Dyer, one of the co-writers and co-producers of Frontline, shared.

He shared that the vibe started when his nine-year-old son heard him singing a few lines in praise of frontline workers and proceeded to join him. The youngster asked him to get a beat so that they could share the song on Tik Tok and that’s when Dyer reached out to several persons on his contact list, one of whom was Morgan’s Heritage’s musical director, Andre ‘DreZion’ Bailey. “DreZion and I hadn’t spoken for a while and the truth is that we hadn’t parted on the best of terms. So this project was cathartic for us,” Dyer explained.

Bailey was asked to play a few bars to accompany the vocals, but it seemed that he was inspired. He sent back a full one-drop reggae beat and also recorded his own vocals on the hook accompanied by Dyer’s son’s vocals on harmony. He also issued a challenge, “Get two verses and a bridge and let’s finish up the song.” Dyer, who works in the banking industry, but does music on the side, reached out to his colleagues, Morris ‘Tammo Jango’ Griffiths” and Alvin ‘Paashot’ Allen to write and record two verses. Dyer explained that Allen works at Montefiore Hospital in the Bronx, so he had a first-hand view of the impact of the pandemic on many of his medical colleagues.

“He saw the medical teams going above and beyond in their efforts on behalf of humanity. It’s amazing the number of doctors who caught the virus. I remember Dr Breen in Virginia who continued to treat patients after she recovered from COVID-19 then committed suicide. Our aim was to capture the enormity of the sacrifices being made by workers on the frontline and to express our gratitude and love for them. What has emerged is nothing less than a lyrical masterpiece,” Dyer said.

Dyer pointed out that some real pain and sacrifice was wrapped up in the mixing of the single, as well, because Bailey’s father passed away, towards the end of the project. As difficult as it was, he completed the project, even while making funeral arrangements for his dad.

“ Frontline has been officially released on all online platforms and we are contemplating doing a music video. Part proceeds will go to charity, and the amazing thing is that the University Hospital is one of our picks and when I reached out to a friend of mine to do some background vocals, she was so impacted by the project that she said she didn’t want any payment. She asked that we contribute to a unit at the hospital which her father had headed.”

A joint One Jam and Tenement Yard production, Frontline will be distributed by DistroKid.