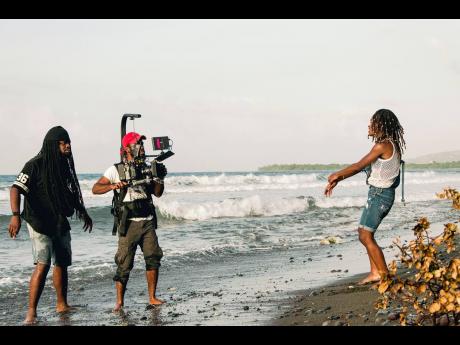 Yannick Reid is no stranger to the creative industry. An established photographer, he has also been carving out a name for himself as a sought-after video director. He has directed a number of music videos, namely, Jah Is Real by Pressure Busspipe; Can’t Feel No Way by Protoje; Every Nation with Sizzla, Chino, Dre Island and Tarrus Riley; and Sudden Flight for Protoje.

Despite all that expertise under his belt, while working for A-list artistes, Reid said he was humbled and honoured when Grammy award-winning singer Koffee approached him about directing her new video, Lockdown. “Koffee herself reached out to me and let me know that she has this song. She played the song and said she was interested in me directing the video,” he shared with The Sunday Gleaner.

As far as the concept was concerned, Reid revealed that Koffee already had her vision in sight. His job was really to connect the dots, create a storyline, take her idea, and present it in a way that people could understand. “She really wanted it to feel like a day in the life with Koffee. We worked on it together and made it a collaborative process,” the director added.

The visuals harmoniously reflected life in quarantine, the home vibes, juxtaposed with what she envisions her life to be like after lockdown, showcasing the natural beauty of Jamaica. With many locations to cover over a wide cross section of Jamaica in only two days, the directing situation, he said, was intense. “We didn’t have long to shoot any one scene. It was all about crunching time and numbers. I had a really great crew who carried us through.”

He gave much credit to Randy Richards, his director of photography, with whom he kept in constant communication and who knew how to get every shot he needed. He made special mention of his hard-working assistant director, Habibi Bailey, and spoke highly of video producer Carleene Samuels, who granted him access to certain exclusive links.

Even though the video shoot was intense, it was rewarding and fun as well. “We got the opportunity to try and be ambitious with the shots. It was a great experience,” he asserted.

Working with the artiste, he confessed, was also a pleasure. “Koffee is cool. She is really wise for her age, really mature. She has a good idea of what she wants, very outspoken, and not afraid to disclose her likes or dislikes.” He continued: “She is also hands-on when it comes to the process. She trusted my vision and gave me a lot of creative freedom to do what needed to be done. She is very easy to work with, not moody or anything like that, ensures that the shot is done. She is well mannered and extremely composed.”

Reaching 12 million views since its release a month ago, Reid is blown away by this surreal experience. “One can’t really count to 12 million, so it’s crazy,” he said. Expressing happiness for both her and her team, hitting these off-the-chart numbers with a Jamaican crew, he said, was a proud achievement. “There is usually some doubt about what we, as Jamaicans, are able to do without the help of persons from overseas. This video serves as a testament as to what happens when you trust Jamaican talent and give this talent the access needed to achieve.”

Reid is excited to direct other projects and see who he can work with next to bring creative visions to life and portray the narrative that Jamaica can compete on the world stage when it comes to visuals. “We just want the opportunity to work alongside the great musical talents in Jamaica and create something that lasts,” he stated.