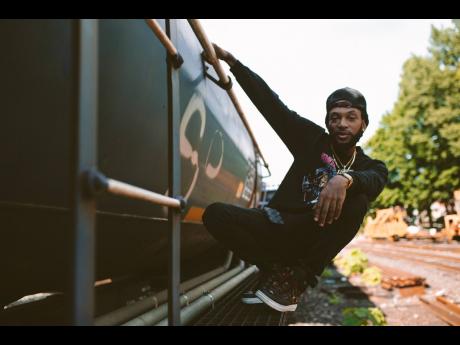 New York-born Kamaal Burrowes, better known as Klassik Frescobar, is a rapper-singer who has been creating a stir with his lawless, high-energy type of ‘soca-hall’ (a fusion of dancehall and soca). His growth can be attributed, somewhat, to the good company of Miami hitmaker, disc jockey, and producer LL Cool Blaze and Bajan entertainer MarzVille.

Klassik Frescobar’s musical influence dates back to the ‘90s, being raised in Kingston, Jamaica, where the exposure was to more than one genre. He remembers getting a hold of his mother’s cassette player to listen to the tunes of Bounty Killer, Sean Paul, and Beenie Man, as well as listening to soca and calypso, “which I had no idea did not originate in Jamaica because I would hear it so often on the local radio stations” and which were preferred by his grandparents.

While as a teenager, he developed a deep passion for music, having spent a decade in Jamaica before he returned to New York, his foray into Caribbean music was unforeseeable.

“I did not think about doing Caribbean music in general. My start in music was through battle rapping at around age 14, but music wasn’t even something on my mind until I was 16 years old and decided to write songs,” Klassik Frescobar shared. “My original name was Sikk, but when I ventured into songwriting, I changed it to Klassik. It was a way to keep my old name but still be different. The ‘Frescobar’ is a pseudonym made out of two words: ‘fresco’, which is Spanish for ‘fresh’, and ‘bar’, which is a unit of measurement in music. It was a fitting choice for a name.”

Klassik Frescobar dedicated a lot of time to creating rap music but stayed close to his roots by attending the dancehall parties in the Bronx and, through this, was able to build relationships with DJs and producers within the diaspora. Then, he migrated to Miami in 2014, where he made more connections. He credits LL Cool Blaze for initiating the transition to soca “by inviting me to get on a rhythm, the ‘Bad Boys Riddim’”, and five years later, he had his breakthrough on Miami’s carnival scene with his single Boom on the Fuego riddim.

He has continued to make soca music since, despite the international music industry’s approach to the genre being traditionally on a seasonal basis.

“Soca is bigger than a season. I understand why music professionals put out music for the different carnival seasons, but for me, coming from a culture where music is released constantly, I believe the key for it to grow the way it deserves to grow is to treat it as an industry,” he said. “Communicating with other artistes and producers, I have heard the opinion that soca cannot be self-sustainable all year round, so that, in turn, makes critics question what I am doing.”

With his music a popular pick for the wider Caribbean diaspora, Klassik Frescobar was determined to be a household name with producers on Jamaican soil, but regrettably, the feedback was, he said, “that soca was not a primary focus, and they would get back to me”. But that was a year and a half ago. Now, he’s celebrating the likes of Cardi B sharing his latest single, Looking Good, to her more than 76 million followers on Instagram.

“I figure I would grow as an entertainer, put out as much as I can with who was willing to work with me. Producers from St Lucia responded quickly to me, and their musical style is somewhat similar to dancehall, which made it natural for me to write the songs,” he said, pointing out that the songs he made on the Lucian riddims were well received, so it became important to cater to that growing fanbase.

He says that with the cancellation of major carnivals in 2020, several producers he has worked with have not made rhythms, and those with recordings are reluctant to release new music without the build-up of the season behind it.

“Yes, I agree, there are no carnivals to go with the projects, but I think if the music industry professionals invest time and creativity into soca, it will evolve from being a seasonal genre,” he said.

The Looking Good artiste is gaining a lot of momentum even in the absence of the active carnival seasons with a remix to the popular track that features Trinidadian soca artistes Ghost and Madman, Kisha from St Lucia, and Bajan MarzVille that was recently added to the weekly BBC Radio 1 playlist. He was looking forward to travelling to St Lucia, as well as being part of Jamaica’s carnival road march in April; the Cayman Islands’ Batabano (the official name of the carnival season, held during the first week of May); and Miami Carnival, which would have kickstarted this week. The promoters have announced going virtual, but Klassik Frescobar is sceptical of their plans for the execution of an online carnival.

“It was daunting at first, thinking a whole year was taken from me and that the events I was booked for were taken from me. In St Lucia, I have a strong feeling they know my voice but not my face, and with the remix with MarzVille, it is a conduit to cross over into that market. I was looking at 2020 as the year to break into different spaces and return to Jamaica, but I am trying to remain optimistic,” he said.

“The plan is to just keep putting out material through the Internet and also continue the momentum of the Looking Good remix . I’m pretty into improvising my plans; it gives me the chance to adapt to an ever-changing market.”