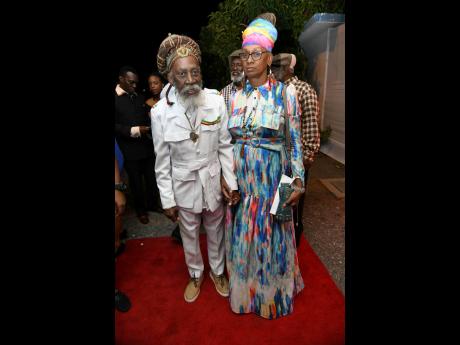 File
Bunny Wailer and Maxine Stowe at the JaRIA Honour Awards 2020 at the Little Theatre on Tom Redcam Drive, Kingston, on Tuesday, February 25, 2020.

With tomorrow being celebrated as National Heroes Day, Maxine Stowe, the manager for iconic reggae singer Bunny Wailer, says that there needs to be a special status conferred on a certain calibre of artistes, who have been recognised by the state for their contribution to the music industry. This, she says, would ensure that a well-defined protocol would be followed upon their deaths and assist with the preservation of their legacies.

Stowe made her comments against the background of the events that have unfolded following the passing of reggae legend, Frederick ‘Toots’ Hibbert, in particular, the debate about where the reggae singer, who holds the rank, Order of Jamaica should be buried.

“Toots’ situation reflects the need for a National Treasure status for artistes who have achieved Order of Jamaica and Order of Merit contribution,” Stowe told The Sunday Gleaner.

She added, “This status would give their families and the artistes themselves the policy that is accorded for their legacies to be preserved for future generations as much as the current. Being responsible for such an artiste in the Honourable Bunny Wailer, I am very invested in the current impasse with Toots funeral rites providing a transparent National Treasure policy.”

A Living Human Treasure is, according to UNESCO, a person who possesses to a high degree the knowledge and skills required for performing or recreating specific elements of the intangible cultural heritage. The title is also known as Living National Treasure.

Toots was awarded the Order of Jamaica by the Jamaican Government in 2012, and there has been a call for him to be elevated to the Order of Merit rank.

Bunny Wailer and Jimmy Cliff are the only two living musicians to hold the Order of Merit, the highest honour that can be granted by the Jamaican Government for achievements in the arts and sciences. Other founding members of The Wailers – Bob Marley and Peter Tosh – were posthumously bestowed the award in 1981 and 2012, respectively.

The Order of Merit award can be held by no more than 15 living persons and is not given to more than two people in any one year. The order’s motto is “He that does the truth comes into the light.”