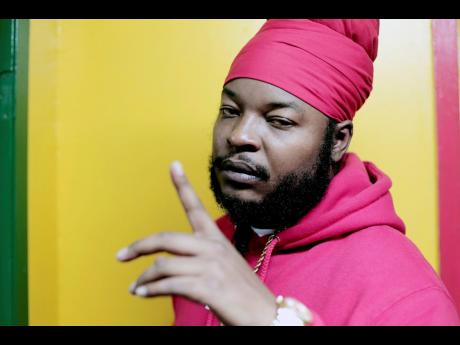 He is well known for being a US Virgin Islands reggae ambassador, even though there are still some fans who mistake the name Pressure Busspipe to be a born-Jamaican artiste. Still, he embraces it.

“African heritage is one blood within the culture of music. I grew up listening to a lot of the music, a lot of which was reggae music. So naturally it’s embedded in my mind from a young age,” Pressure Busspipe told The Sunday Gleaner.

Though it seems like eons, it’s only been one year since the release of his seventh album, Rebel With A Cause, which dominated on Pandora Music where he was named a featured artiste on the ‘New Reggae Now’ playlist. The 14-track set featured Jamaican hitmakers Sizzla, Anthony B, Protoje, Kabaka Pyramid, Jah9 and American rapper Redman, which helped to set off a domino effect on digital streaming platforms, across several genres, and an ever-growing legion of fans.

How did Pressure Busspipe become a mainstay in reggae music and manage to stay relevant in the playlists of disc jockeys and online radio? For Pressure Busspipe, it’s all about a consistent discography.

The reggae artiste has released an album biennially since his debut album titled The Pressure Is On in 2005. The longest he has taken is three years following his sixth album, Red Rose, which was released on his own Busspipe Records and made it into the top 10 of the Billboard reggae charts. The strategy is not only for him to maintain relevancy but also keep his listeners on their toes for more, while he, Pressure Busspipe said, “continues singing ‘upful’ messages.”

“I don’t know if anything has been missing from my career. It’s just to continue. Patience is a virtue, you know. Be humble, for humble is the meek and the meek shall inherit the earth,” expounded the artiste on the valuable lessons he has employed in his career.

Before the year ends, Pressure Busspipe is giving his fans Never Left, officially released last Friday. The lyrics are written like a personal love letter to a female interest, but the artiste says, “It’s really not dedicated to anyone in particular,” instantly shutting down that claim.

The sound, too, also hints a further evolution in Pressure Busspipe’s recording style – not that we’re complaining – is one of the singles on the dancehall and afrobeat juggling rhythm compilation dubbed the Star Chile EP.

“As I said, it feels natural because it is African music and Jamaica’s musical genre, dancehall music, is also African music. For the lyrical content, we know, in the world, love is the healing force. It’s always good to hear a song speaking upful about a woman, so I tried to put my energy in that for the masses,” he said. “There are many musical projects in the works, as I am now attempting to work on two separate albums as well as a compilation of various artistes under the Busspipe Records label.”

Although no shows have been booked for 2021, the reggae artiste anticipates singing for large concerts sooner rather than later.

“I have not even had the opportunity to visit Saint Thomas in the Virgin Islands throughout the pandemic. It has affected the music industry globally, and it has effected the whole world. So, of course I am included. It changes the dynamics for all of us, but I am looking forward to performing everywhere next,” he said.