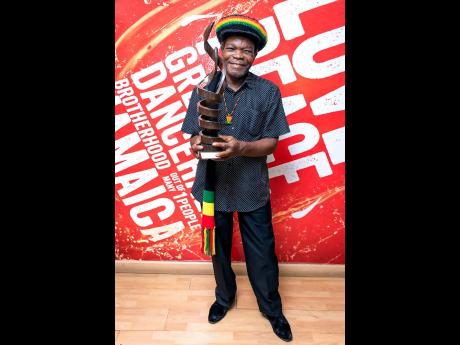 Contributed
Eric Donaldson is all smiles after receiving Red Stripe’s Stand Up for Our Heroes award.

After more than 50 years in the business, Eric Donaldson says that he is not ready to retire.

The reggae icon released his 28th album, entitled I am in Love, in July and recently received national recognition for his contribution to Jamaican music.

The Land of my Birth singer was appointed to the Order of Distinction, in the rank of officer, on National Heroes Day.

Expressing gratitude for the national award, the crooner said he hopes that others would be inspired to preserve and protect the music.

“Reggae will always remain the same great music. Over the years, we have seen people try to change it, but original singers like me are trying to keep it alive. We have to keep the standard high. Some people are putting lyrics to a beat and calling it other names, but it is still the same reggae music that we’ve come to know and love,” said Donaldson, who has been in the business since 1964.

He asserted that people around the world will always love the genre as it is one of the few art forms that connect with audiences spiritually, mentally, and even physically.

The seven-time Jamaica Festival Song Competition winner was also recently recognised by Red Stripe with a Stand Up for Our Heroes Award. For Donaldson, the award is extra special and a timely reminder of the deep love and appreciation for his craft.

“I won a silver cup from D&G in 1971, and it brings me joy to know that they remember me after all those years to do something like this for me. I think I deserve this award, and I am truly grateful to be recognised by Red Stripe for my music. It makes me feel like someone sees me in the country and appreciates me for what I’ve done,” shared Donaldson.

Born and raised in Kent Village, St Catherine, Donaldson recalled attending Crescent Primary before he took up music as a full-time career. He describes himself as a “Jack of all trades” and says that he is only a master of music. Although he enjoys painting, cooking, and being a tailor, his love for music has always kept him motivated to record songs for the enjoyment of his Jamaican fan base.

“I have done many trades - from mechanic to plumbing - but I am most dedicated to making music that will make a positive change to our society,” said Donaldson.

The industry veteran is encouraging young singers to record positive music that will last for a lifetime. He believes that the songs being recorded by some upcoming artistes will not stand the test of time and is, therefore, urging young creatives to pursue conscious music like Bob Marley’s One Love and his Cherry Oh Baby.