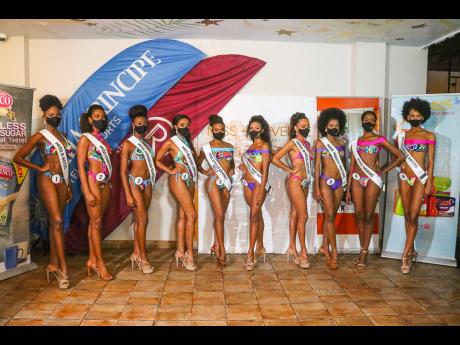 When the franchise holders of Miss Universe Jamaica announced last month that the 2020 staging of the pageant would go on as planned, they were bombarded with questions on how they would manage to pull it off amid the coronavirus (COVID-19) pandemic. At the time, organisers revealed that there would not be a physical showing this year. Instead, the finals, scheduled for the end of this month, will be hosted virtually.

With the date in mind, the organisers have been moving full speed ahead with their plans. The top ten finalists have already been selected. The question now: how exactly will organisers of the event ensure the safety of the contestants? In an interview with The Sunday Gleaner, co-franchise holder of MUJ, Mark McDermott, sought to assure the public that he and his team have everything under control.

“It is our duty to abide by the protocols, and we have been very rigid when it comes to that. We have been making sure we wear our masks, we observe social distancing protocols, and we sanitise very often. We are well aware that persons can be asymptomatic, meaning they can have the virus and not display any symptoms, and so we have to ensure we cover all our bases,” he said pointing out that although the ten finalists had not yet been tested for COVID-19, plans are in place to get that done.

“They have not, to my knowledge, been tested just yet, but they absolutely will be tested before coronation night because we absolutely want to ensure that they are fit and in the best of health for that final night, and, of course, for every night going forward for the winner. We have it under control. It (testing) is something we’re scheduling in. We actually have someone on the team who is responsible for that, a pageant doctor who sees to the health and welfare of the ladies in the competition. That person has been our pageant doctor, and one of our judges, since its inception, and so the pageant has a rich history of prioritising health and wellness.”

Pointing to the recent staging of the Miss Teen USA and Miss USA pageants, McDermott said that although an official date for coronation night for the global pageant is yet to be announced, he suspects that it will model that of the shows already staged.

“We did get some word that protocols would be rigorously followed by the parent pageant, and I am not worried, to be honest. We don’t know exactly when or where the competition will be held, but I know that as part of the travel protocol for all the ladies who will be participating on the final night, they must test negative for COVID-19,” he said.

“Ultimately, I think the international pageant will look something like what you’ve seen so far for the Miss USA and Miss Teen USA pageants because they have already crowned their winners. Their competitions are also modelled off the parent pageant, and they were different this year. For those who would have watched, they would have seen the contestants wearing their masks, and they would have seen the COVID-19 protocols being observed because each contestant had their own individual microphones, etc. Our ladies would have seen that and would have been preparing themselves because they know this is what Miss Universe will possibly look like.”

With that said, McDermott acknowledged chatter swirling around social media about the decision to carry on with the pageant during a pandemic. He said some persons could not fathom why, unlike all other major entertainment events for 2020, the competition was not cancelled. But McDermott, in saying that pageants are much more than a beauty competition, said that now more than ever people needed the light that exudes from pageantry.

“I think the people who are saying that don’t understand the evolution of pageants in the world. Pageants have moved away from being just a beauty competition. It has become a movement in altruism, a movement in empowerment, a movement in giving back to our communities, and a movement that has really been integral in creating strong women,” he said.

“Right now, one of our contestants is supplying students with tablets so that they can supplement the falloff with the Ministry of Education. She is also giving them Wi-Fi so they can keep up with online schooling. One of our pageant managers has a programme, where he is providing one hundred meals across Jamaica to people who are indigent and can’t afford it. So now more than ever, the altruism that comes from pageants is important. These ladies are out there looking for ways they can help. So when someone says they don’t understand why we’re doing this in a pandemic, that is the reason. These acts of kindness that these ladies are undertaking through the pageant are enhancing people’s lives, and these young ladies need support, not criticism. These ladies are fired up to help and rearing and ready to go to represent Jamaica, and its awe-inspiring.”

McDermott says he is particularly proud of this year’s crop of contestants as they are putting the possibility of representing their country on the world stage above anything else. He says the prize pool for this year has dwindled drastically because of a lack of sponsorship but says that the limited package has not deterred the young women in the competition.

“Less sponsorship, of course, means fewer prizes, and so that is another thing that will be affected by this year’s pandemic. Let’s just say that the big prize this year is the trip to Miss Universe, and we are negotiating now to get some in-client training at Dale Carnegie. The Bahia Principe will give the winner a week’s stay at the hotel, but all the other thrills that we’ve had in the past are, unfortunately, gone,” he said.

“Still, this year, we saw the most applicants we’ve ever received, and so the interest seems to lie far beyond the prizes.”