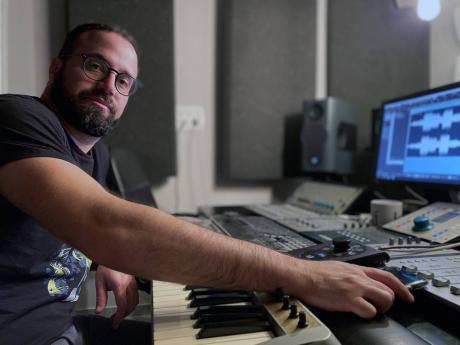 Contributed
Israeli-mixmaster, Jordan Schultz, has worked on a number of dancehall tracks.

With reggae and dancehall entertainers making their rounds globally over the past decade or more, it is only natural for producers and recording engineers from all walks of life and cultures to follow the trail. Israeli mixmaster Jordan Schultz says he has been fortunate to make connections, over the years, with Jamaican artiste managers and producers alike, which has afforded him with opportunities to contribute his know-how to the music of some of the island’s hitmakers, including Sean Paul, Spice, Vybz Kartel, Busy Signal, Ding Dong, Konshens, Serani, and Govana.

His first time working with dancehall music was the 2018 Under Construction single by Stylo G, which Schultz said, “set in motion other projects with the entertainer”.

“The job I got was to master the track. I liked it instantly because it was different. The beat and the harmonies were strong yet sounded amazing and definitely easy to listen to. Immediately after I got to master all of Stylo G’s Ten Years Later EP, I’ve got hooked and fell in love with that [fusion] style,” he told The Sunday Gleaner.

The most successful dancehall projects the audio engineer has worked on to date are also from the London-based Jamaican entertainer: the original and remixes of Dumpling and Touch Down. But the biggest record Schultz has mastered is Sam Feldt’s Post Malone, which hit 100 million Spotify streams a few months after its release in May 2019.

He shared: “I started producing at the age of 13. Five years later, I already contributed to hits and a had a few record deals in Israel. I worked also as a ghost producer. Over the years, I experimented with lots of genres just to leave my comfort zone and practise, but I always found my way back to dance and pop music. Even though I work with records on various labels around the world, my biggest success as a producer was always in Israel.”

He is also involved in the community, educating college students in Israel.

Schultz, who comes from the northern port city of Haifa in the Middle Eastern country, originally wanted to be a hotshot on the main stages of the biggest festivals like any multifaceted producer. But in developing a burning infatuation with the engineering side of the music, he did not penetrate that circuit. He moved into the shadows, working behind the scenes with record labels such as Universal, Sony, Warner Music, and Island Records rather than in the spotlight.

An audio engineer’s talents and contributions to music – whether highly streamed or receiving high sales – are not always celebrated, much less mentioned publicly, and breaking in is not always a simple process. Schultz revealed that establishing himself as a trusted professional in the music industry and securing international ties “was not an easy task”.

“I reminded myself every day to be a human being first because a personal touch matters even while it is business. That stays with me wherever I go, and it is the reason I try my best to take an interest in my clients’ lives – not just their music – help them whenever I can, let them know they can always trust and rely on me. This is the main reason I maintain a habit of communicating with artistes I work [with] over the telephone, rarely via emails,” he said. “The second important thing to remember is, every record has the potential to become a hit. Never underestimate anyone. Persons can guarantee that I will be providing 100 per cent of myself every time, and artistes who know that keep coming back to work with me, and it doesn’t matter which country I am from.”

He names Richie Flores, part of Stylo G’s management team, and Chimney Records’ Jordan McClure as some of his best connections to Jamaica.

Schultz said that it is his desire to land in one of the island’s national airports. “I love to travel, meet interesting people and experience new cultures through music, food, and art, but I am yet to set sights on the breathtaking views in person. That reminds me of a conversation from a while back with Jordan, where I saw that he posted some images of him on a beautiful beach surrounded by palm trees, and said to him, “Enjoy your vacation. We’ll talk later”. He replied that he was in Jamaica, and it was not a vacation. Immediately, I was blown away. This is something I’d love to see.”

The now 36-year-old audio engineer says the reggae and dancehall scene is “booming” in Israel.

Dancehall on the Rise

“It’s unbelievable! The artistes are filling clubs and concerts all over the country. While the locals get millions of streams, it seems that everyone wants to tap into that market. Even when most of the mainstream in Israel is oriental music that has recently transformed to a kind of pop music, the dancehall scene is getting a lot of attention and support because it has grown so much and so quickly that Jamaica’s artistes began frequenting the performance circuit in Israel,” he said.

As an engineer who has got the chance to work with some of his favourite dancehall entertainers like Busy Signal and Serani, he shared that he has an inside look at talent, culture and real life.

“That is, unfortunately, very rare these days. These artistes are not only some of the most talented, but they remain true to who they are. If there’s one thing I could advise Jamaican artistes and producers about improving their way of music production it would be, ‘Don’t try to cut corners. Don’t be slack’, and because the music business is rough, and has a tendency to be cold, passion and perseverance is what sends you to the top,” he said.