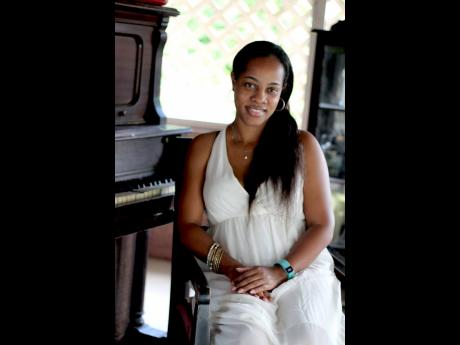 Photo by Stephanie Lyew
Public relations specialist and entertainment manager Lesley Hayles is adding producer to her list of titles.

Lesley Hayles is opening a new chapter as a music industry professional by venturing into production.

Known in music and social media circles as Lesley Odyssey, the daughter of Bunny Hayles, founder of popular sound system Bass Odyssey, comes from a long line of disc jockeys, singers and producers.

“My foray into the music business was natural, but the recent pandemic has me taking my ‘one-woman show’ to the studio and hopefully later on, to the stages,” said Hayles.

The mother of two, Hayles has worked as a public relations specialist and entertainment manager presiding over logistics, artiste bookings and promotion in the dancehall community for over 15 years. She has worked with entertainers such as Munga Honorable, Gaza Sheba, Razor B, BridgeZ, Savage, Bramma and Gage, among many others, from the comfort of her home office.

The recommendation to add production to her repertoire came from producer and label owner Anthony Haynes. Though a little apprehensive, she told The Gleaner that this year has pushed her to explore new avenues.

Hayles shared, “2020 is an example of what is to come. It has demonstrated that we, as music industry professionals, have to think outside the box, step away from tradition, and test our strengths in other areas. Music has been my bread and butter, as Tessanne Chin said on The Voice, and I have been balancing well, even before the pandemic, working as a one-woman show”.

An Ear for Music

She added, “I have been told that I have an ear for music – what sounds good, what doesn’t sound good. Anthony, being one of those persons, shared several rhythms with me all under his Haynes Records label, which I have been sitting on for about two years. It just so happens that this is the time to unbox them. My doubts are more on the part of my personality – quiet, reserved, sort of an introvert – which many persons have used to judge my overall capabilities.”

Over the years, Hayles has taken the careers of her clients, 80 per cent or more of which are men, to the next plateau while enduring sexist attitudes which have likely deterred other women from the industry long before they had the opportunity to imprint their names in Jamaica’s music and entertainment ‘her-story’.

“Over the years, I have been told this is not a business for me, but I was not discouraged, and I continue to dismiss those claims as I develop the courage to put myself more out there. I admit, I don’t like to be turned down or embarrassed, but it takes risk to be successful in this business,” she said.

“I recognise that I have to be unconventional without having to do what most females have done in the past to have their names in the know. A producer’s work may be behind the scenes, but their reputation is always on display.”

Comprised of both established and upcoming acts, Hayles’ Ride Me riddim consists of tracks from oldest sister Ava ‘Sandy Star’ Hayles, known for her ‘90s hit Don’t Wanna Lose Your Love, which was recorded on the Taxi riddim remake by their uncle, Dennis ‘Dennis Star’ Hayles, and dancehall artiste Ganggoolie, as well as Star Stain from Montego Bay and 1Leedah from Portmore. Hayles was also able to secure Philadelphia-based dancehall-R&B fusion singer Mzs Quanny to record the title track, Ride Me, written by Hayles herself.

“I don’t expect the track will make money, especially in these times; however, it would be good if it does. This is to wet my feet and get my name out there, not just as Lesley Hayles the PR and manager woman, but as a dynamic producer,” she shared.

Hayles included her family in getting the compilation ready for the launch of the rhythm, which took place on her 40th birthday on November 13. All tracks were mixed and mastered by younger brother Stephen ‘DJ Ali Patch’ Hayles from Mixplosion Sound System. While all artwork was done by another younger brother from Coppershot Sound System, Shomani ‘DJ Kitt’ Hayles, for his NAAS Artworks graphics design company. Nephew, Rashaad ‘Karrat’ Hayles, edited the official music video for his mother, Sandy Star’s track on the rhythm titled Just One.

As a producer, she is taking a chance to broaden her scope within the music industry, said Hayles, who notes that she is not the strongest in the technical side of production, but hopes to, later on, enrol in a course to study the field at all levels.