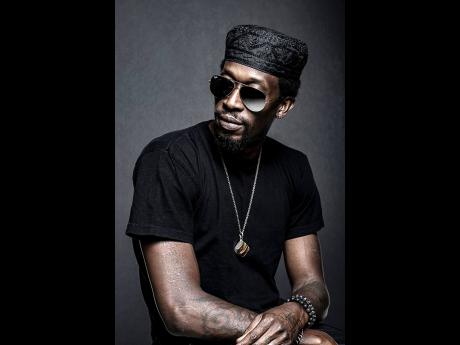 Contributed
Grammy-nominated singer and songwriter Blakkamoore, who hails from Georgetown, Guyana, says he fell in love with reggae at an early age.

There has been mixed dialogue surrounding the reggae revival scene, with some detractors describing it as a step away from the traditional roots reggae instead of an actual rebirth, because of its fusion of the heavy drum patterns of dancehall with overtly digital rhythms. But its popularity continues to grow across the Caribbean and the Jamaican diaspora in the United States and the United Kingdom, with a sound that is hard to ignore, says Grammy-nominated singer and songwriter Blakkamoore, who hails from Georgetown, Guyana.

Unlike the critics, Blakkamoore believes that reggae revival “is a return to the roots of the music, a return to the message of deliverance and upliftment by the artistes of this generation”.

The singer was first introduced to reggae by his father — who boasted an extensive record collection — including most of the reggae icons we all know and love. When he migrated to Brooklyn, New York, at a young age, he found himself in a cultural melting pot, including persons who either migrated to the US from Jamaica or descendants of Jamaicans.

“I fell in love with reggae at an early age. Not only did I make some really cool friends who were from the birthplace of the genre (Jamaica) in East Flatbush, where I was raised, [but] one of my closest bredrins, Mario, used to collect sound system cassette recordings from there (Jamaica); and listening to those sparked my curiosity towards dancehall culture,” Blakkamoore told The Gleaner.

“The sound systems and disc jockeys who were, and still are a part of this great culture, like King Jammy, Stereo Mars, Metro Media, acts like Charlie Chaplain, Admiral Bailey, Brigadier Jerry and Papa San … that era of dancehall was my schoolroom. To this day, the musical culture of Jamaica is thriving and flourishing like never before in New York; there is no shortage of that vibes,” he continued.

He said that the reggae and dancehall scene in Guyana has also evolved and continues to show new developments, but lacks the important groundwork to support the talent existing there.

“We have always shared a love for the music since its origins of ska and rocksteady. Those early tunes from the 50s and 60s would play on local Guyanese radio stations, but today the scene there needs real focus and attention from the veterans in the business — there is an abundance of artistes in Guyana, but we are missing proper music business infrastructure,” he said.

Blakkamoore, also known by the name ‘Jahdan Blakkamoore’ (and christened Wayne Sharne Henry by his parents), honed his skills over the years and was able to establish a career living overseas with writing and producing credits on work done for artistes like Snoop Dogg, Diplo, Major Lazer and Wyclef Jean.

“To be honest, I have been very blessed during my career, and I have worked with some artistes I never even dreamt of, Snoop Dogg being one of them, and even Lee Scratch Perry. Working with Snoop was an amazing process. I got to see the work ethic behind the icon, his ability to interpret what we created and his humility, also,” he expressed.

It was while working with long-time songwriting and production partner Andrew ‘Moon’ Bain (with whom they collectively go by the moniker ‘PaperStars’) on Snoop Dogg’s 2013 album Reincarnated that his recently released Upward Spiral album manifested. Still, the actual work for it did not start until 2015. Blakkamoore said he had travelled back and forth to Jamaica and watched the reggae revival unfold and dominate the airwaves. In May, the singer-songwriter released his long-awaited album and like he promised, released a limited-edition, double CD dubbed Upward Spiral Deluxe.

Blakkamoore explained, “The five-year incubation process was dictated by life itself, we were recording for Reincarnated as well as our individual projects, all within the same time frame.” He said it was while in Jamaica, recording for the Snoop project, that they became inspired by the sounds of the new generation of reggae and dancehall heard on the airwaves. He said the decision was to put Upward Spiral on pause to embark on a totally new project — Order of Distinction. The project was produced by Zion I Kings — comprising Bain, Laurent Tippy Alfred, David ‘Jah D’ Goldfine, Andrew ‘Drew Keys’ Stoch and, recently, Romaine ‘Teflon Zincfence’ Arnett — and released on the imprint Lustre Kings Productions.

“What I hope to achieve in my music in particular, is to be as sincere and authentic to myself as possible with the message that I transmit, singing from the heart, not the mouth, as I would say, and for people to be inspired to make [a] change after listening to my music; personal change, firstly, then social change which leads to global change,” he said.

“I do not wish to set an example with this new album, rather to make a contribution to an art form that has greatly influenced my childhood and adult life, and my perception of the world. I pray it is received that way. It is very diverse in terms of its musical direction; there are a few cuts that may not be considered as reggae music in theory, that is by design, because Moon and I wanted to tantalise your eardrums with a variety of sounds.”

Some of the standout tracks, Play The Role, Mash Down Georgetown and Mek It Play, which he delivers in an old-school, reggae toasting fashion over a pulsing kick drum, drives home a timeless message in a modern-packaged roots track — all three distinct tributes to reggae and sound system culture. While the remix of Get Down Tonight, which sees the PaperStars rekindling the fire with Snoop Dogg on the party track, and the collaboration Tomorrow Belongs to Us, featuring burgeoning Jamaican dancehall act Alandon, add a meditational dancehall flavour.

Just as how we can share in the love of Caribbean food, Blakkamoore remarked, “We can also share in our musical expressions. With that said, it is extremely important that my music is accepted in Jamaica and the connecting Caribbean diaspora for a few reasons, one of the first reasons for me is because of the cultural affinity we share … vibes up!”