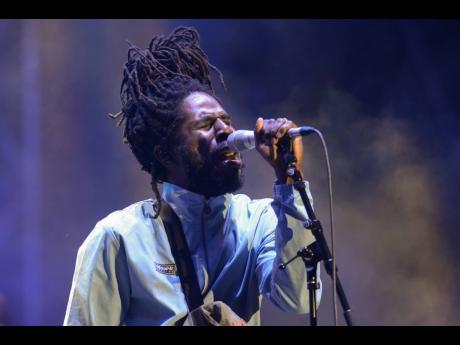 Grammy-nominated reggae artiste Chronixx – through his Caring Hands of Rastafari (CHOR) Foundation – has partnered with Endangered Rangers: A Virtual Fundraiser for African Wildlife & Their Human Protectors, to raise awareness on the wildlife conversation community in Africa where animals were already greatly at risk from poaching and climate change. He rounds out the programme, which includes a diverse roster of international personalities and philanthropists who have joined “virtual hands” to support the global fundraiser to address the devastating effects and impact of COVID-19, which has now also put the lives of the rangers, who safeguard endangered animals, in peril.

“It was brought to the table by my business partner and the foundation’s CEO, Zion Tomlinson, and one of our members, Tamiann Young, as they believed it had been aligned with the mission, core values, and goals of our newly formed foundation, which has its roots in the Ethiopian Creed. The rangers are standing right now at the centre of humanity and the heart of the preservation of our natural life as human beings and for many creatures in Africa … di motherland yuh nuh,” Chronixx told The Sunday Gleaner.

With that, he decided that lending his voice to the cause was a great way to close out 2020. Some of the high-profile industry players who are adding to the features that already include the sharing of the stories of on-the-ground rangers in Africa are two-time Oscar nominee Djimon Hounsou, known popularly for his role in the 2006 film Blood Diamond; serial entrepreneur and fan-favourite of ABC’s reality television series Shark Tank, Daymond John; Emmy Award-winner Debra Messing; iconic actress Loretta Swit; Sheikh Abdul Aziz, better known in the United Arab Emirates as the ‘Green Sheikh’; British fine arts photographer David Yarrow; former lead guitarist of The Eagles Don Felder; and multiplatinum recording artist and former American Idol winner Jordin Sparks, who will be performing a song from her new album, Cider & Hennessy, as well as, 11-year old author and animal advocate Kate Gilman Williams.

“I stand with and on the behalf of the young Rastafari community of the world, especially on behalf of the CHOR foundation here in Jamaica. We send our love and support to the rangers out there in Africa,” he said. “One of the things about being human is about using your strength and using your power of unity to bring about balance in creation. We really extend our support by way of our talent and in every single way possible.”

The 90-minute event, which will air live today at 6 p.m. on KNEKT TV and streamed across Facebook, YouTube, and EndangeredRangers.com, is hosted by actor, director, and wildlife champion Josh Duhamel and will see the reggae artiste do a one-of-a kind performance of his hit song Skankin’ Sweet from his album Chronology, which was nominated in the 60th Grammy Awards in 2017 for Best Reggae Album.

Chronixx said: “At this time a year when people a look forward to a new beginning and many may not have been able to achieve what they set out to due to so many different global distractions – no matter what kind a troubles you experiencing or one may have endured – Skankin’ Sweet a jus’ one a dem song deh weh put yuh mine at ease. Based pon di reality of what the rangers are experiencing, I felt like this is a song to encourage dem on dem journey and to mek dem know that dem have wi full support.”

Helping the rangers during the pandemic means saving the lives of thousands of endangered, keystone species like the African elephant and lion, which are threatened with extinction within decades, as COVID-19 has accelerated the already ominous threats to their preservation. The reggae artiste, comparing the efforts to protect endangered species in Jamaica, also urged the nation and the wider Caribbean to tune into the livestream event to experience the global approach to protect humanity and preserve all living things within it.

“We are such a small island group and region compared to the continent of Africa. Even the experiences that we have here differ. To me, there is genuinely not enough emphasis put on the preservation of animals and our flora and fauna [as a people], even those that are indigenous to our own island. I know agencies exist to protect our wildlife, but take for example, our crocodiles. A man will more kill dem fi eat dem or use dem skin or one a dem tings deh. So I would love fi dem realise our duty here in Jamaica by looking into the work of Endangered Rangers and to just take responsibility for all aspects of life on earth because is the Almighty mek di whole a dem,” Chronixx said.

The loss of conservation revenue, up to 90 per cent in Eastern and Southern Africa, is crippling ranger livelihoods and creating security issues. The reduction in ranger patrols and visitors draws out brazen poachers, putting more animals at risk, accelerating an already unbelievable timeline for the eradication of key species, and derailing the considerable progress made in wildlife conservation. There has been an exponential increase in reports of poaching incidents, bushmeat seizures, and wire snares since the pandemic.

In an effort to counteract the domino effect COVID-19 has triggered, proceeds from the event will go towards forward-looking organisations – the African Community & Conservation Foundation (ACCF) in partnership with the Grumeti Fund and The Malilangwe Trust, and Zambezi Partners, in partnership with Wild is Life. They were brought together through their shared mission to preserve African wildlife through the eradication of poaching, using transformative community programmes and advanced technologies such as AI cameras, animal trackers, and secure communication networks for over 7,800 protected areas in Africa.

“Chronixx has one of the most caring and sharing hearts, which is evident from the amazing work he continuously does not only for the people of Jamaica through his CHOR Foundation’s mission and purpose, but he also understands the current need for the plight of the people and the wildlife that are being affected by the pandemic,” said CEO of ACCF, Brady Forseth.

The ACCF, he said, in harnessing relationships to provide the people in Africa who provide for the animals, has created many success stories, including the rhino relocation programme, which they do not want the pandemic to obstruct.

“Our rangers are the heart of operations and the eyes and ears for the wildlife. We are simply overjoyed with the response,” he added.