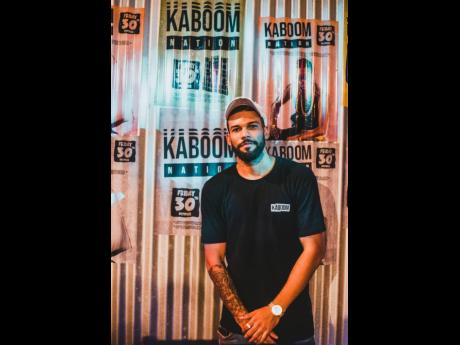 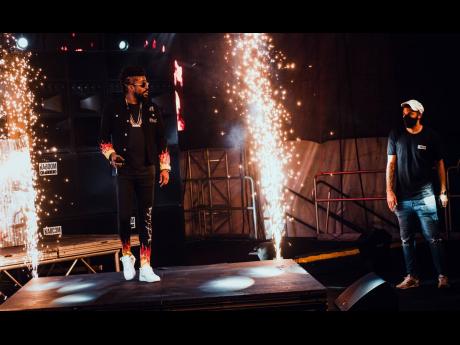 Contributed
Kaboom Nation’s Aaron Spence stands by the sidelines as he directs dancehall act Beenie Man on the set of the One Yard Virtual Benefit Concert.
1
2

Pioneering a new way to present a stage show, live concert or events to boost customer engagement in a virtual space wasn’t in the cards when Aaron Spence embarked on establishing a brand in the entertainment community five years ago. But external forces have pressured the Kaboom Nation CEO to diversify the offerings for the company’s existing and prospective clients.

“We were originally an entertainment consultancy agency, which deals primarily with artistes’ bookings. That affords us the responsibility as the negotiator and goes as far as [us] accompanying the artistes overseas, such as, Shenseea in both Israel and Belize, Chronixx in Costa Rica and Hood Celebrity in Canada, as well as, long extended bookings, such as, Barrington Levy for his tour across the UK,” Spence explained, stating that 2020 was shaping up to be a good year for the 11-member team, before the pandemic. The team includes Spence, along with Devon Smith and Jabari Wallace who lead in the artiste liaisons department, graphic artist Jordane Davis and several well-known disc jockeys.

Even though, technically the company serves as a “middleman”, a role that was thought to be extinct in the digital era where more mediums for individuals to connect with the artistes of their choice became available, Kaboom Nation has embraced it with arms wide open.

“First and foremost, we always have a rep on the ground to be that key correspondent between the artiste and contractor and we manage to find the middle ground for people to benefit, especially with coming to agreements during the financially unstable time,” the CEO said. “Sometimes contractors may be inclined to go to the artistes if they know or have a direct link to them, but I believe it is an advantage to have a mutually respected third party. People have called in to say we are talking to the artistes, but not getting through to them and that is where our company comes in, plus having a middleman means being able to name someone accountable.”

As a booking agent, the company has been involved in the dealings of over 30 entertainers from high-profile reggae and dancehall stars such as Carlene Davis, Freddie McGregor and Agent Sasco and to comedians and other thespians including Oliver Samuels, OD, and Volier Johnson booked throughout the pandemic from March to present. Fundamentally, the middlemen in any industry absorbs risk, Spence said. The middleman’s roles and responsibilities have changed dramatically with the onset of the pandemic. And Spence, who is popular as a marketing and entertainment consultant, shares how he and his team are working to recreate – as close as possible – the live show experience.

“We have definitely shifted in terms of the capability of – and opportunities – to host or oversee real shows; virtual is what started to take off so based on the year. If I were to estimate, I would say for 2020, there’s probably been five big, virtual concerts locally with a global audience and we have done three of them: Reggae Sumfest, Appleton Rum Day in August featuring Protoje, Lila Iké and Sevana and Reggae Sunsplash,” he said. “The team moved from just positioning the artistes and guaranteeing a commitment to a show to designing and developing full sets and organising the production through partnerships with other major companies such as Clear Sound, who provides the infrastructure, including stage, lighting and pyrotechnics.”

KABOOM NATION AT OTHER EVENTS

Other events that Kaboom Nation has played an active role in its execution was Manchester Caribbean Carnival – Virtual Edition in August with I-Octane, Stylo G and Patrice Roberts as some of the main acts booked and also the Trinidad-based One Yard Virtual Benefit Concert in October in which artistes from across the Caribbean region were featured; the company presided over the Jamaican production with Beenie Man, Chronixx and Shenseea with full stage set-ups.

Spence revealed, “The biggest task has been to convince brands to go virtual; it is a challenge, but to get persons to actually try the new mode of entertainment has been an accomplishment as it provided work for our team, entertainers and others working behind the scenes,” adding that an important element for any virtual event like any other, “are the people behind the scenes, who most times do not get enough credit”.

“I have always made the effort to build awareness of the brand, thinking the work will come, but now we are seeing the need for a bigger push to be more recognisable. The goal is for us to function in all aspects of entertainment from signing artistes as a label would, and in production. As unbelievable as it is, we have yet to keep an event of our own though we have partnered with several prominent groups including Caesar’s Army around the carnival season. As a matter of fact, our first roll-out event was going to be UWI Carnival this year to go as far as having a truck on the road,” Spence said.

As it relates to Jamaica’s culture, he added, “It is about being there, living in the moment. With that said, I see the platform sticking around for the next two to three years because it does provide an option for corporate to do promotions to a larger market for half the cost. However, our pay-per-view system is not developed sufficiently for a wider cross section of consumers of our culture — most of whom, want to come here and experience the vibe for themselves. People who try to do pay per view in the digital age will meet upon roadblocks where persons don’t bother to sign on because they can wait an hour to see a full show later when someone finds a way to share the content. Furthermore, for an average promoter, it’s not a viable option if a man or woman is having a show so at the end of it, they can count out the money and determine the profit”.

He emphasised that for the larger virtual events such as Reggae Sumfest, the goal was not to generate revenue, but to maintain a presence in a market while there was none to provide.

“No matter how much you think you know, you don’t know. It is smart to have conversations with the old school folks as well as the new or modern generation and mould both ways of thinking in order to create state-of-the-art concepts so individuals at all levels can appreciate. There are a lot of times professionals within the industry try to do a type of ‘save-the-day’ response to issues that arise but Kaboom Nation prides itself on being proactive instead of reactive to any challenges that have or will present themselves,” Spence said.