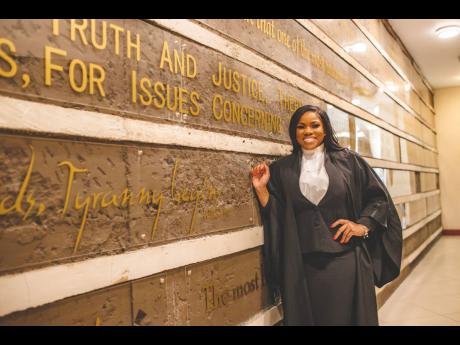 Contributed
Khadine ‘Miss Kitty’ Hylton has been called to the bar. 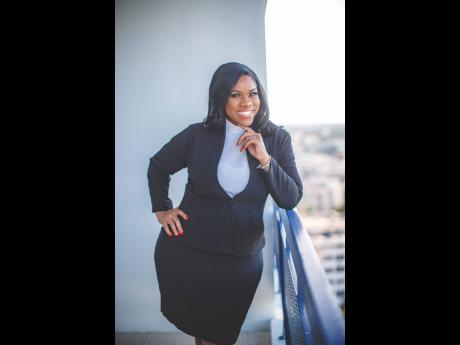 Contributed
The accomplished host says law was always part of her purpose.
1
2

Her vivacious, outspoken, and irrepressible personality has made hostess extraordinaire Miss Kitty one of the most in-demand talents in her field. In fact, watching her come to life on stage, one would not have guessed that the entertainment journalist, born Khadine Hylton, “stumbled” into media, but that is exactly how she described her genesis in entertainment.

She has since catapulted herself to the top of the game in her field, copping her own radio show and booking some of the biggest hosting gigs on both the local and international circuit. Still, despite her massive success in media, the need to achieve more continued to burned deep within her. Revealing her inability to quell her childhood aspirations of one day becoming a lawyer or a politician, Miss Kitty told The Gleaner that she decided to start the journey to making one of those dreams a reality. She set out on her quest to become an attorney-at-law, and in 2018, she passed her final bar exams. Then on Tuesday, Miss Kitty realised her lifelong dream of becoming a practising lawyer when she was called to the Bar.

“Entertainment started by accident, and I took it, ran with it, and I really worked hard at it. I fine-tuned my craft and became one of the best in my field. I was in a male-dominated industry, and I wanted to be a female known for my talent, my work ethic, my worth. But I always want more. As mi siddung right yah so right now, I want more. I have always been that person. I don’t thrive on complacency because strong character is never built on complacency,” she said.

“It (law) was always a part of my purpose. A lot of people say, ‘But Miss Kitty, yuh successful already, why yah go school?’ But for me, it’s always been about the next thing. When I got up the morning and I went up there (Faculty of Law at The University of the West Indies) I was just saying, ‘OK, I’m going to go and hear what the programme is about, what it entails, what are the prerequisites, and all that’. The lady gave me a tour of the facility, and all of that, and I was very impressed, and I said, 'OK, sign me up'. When I got signed up, it dawned on me, ‘But wait! So den a how me a ngo host me show, a how mi a go go overseas and do show? O God! A how me a go do outside broadcast? O God! A how me a go study? O God! Mi can’t manage! Whoi!. And to be honest, it was difficult.”

Recalling that very first week of school, Miss Kitty said that she broke down in tears almost every day as she adjusted to life as a full-time media practitioner and student.

“I cried every day for the first week of being at the Faculty of Law, like literal bawl, tears running. And then the voice said to me, ‘I have brought you thus far, and I will not leave you now’, and I said, ‘God, You have put this on my heart to do, and I am asking for Your guidance, asking for You to clear the path for me, to give me the strength and the endurance to complete this programme’. He has come through for me, and for that, I am eternally grateful,” she said.

Now that she has completed her studies and has been called to the Bar, Miss Kitty says she is filled with mixed emotions as she heads into the next phase of her life. She said that while she is excited to put everything she has learnt into practice, the thought of the latter is also terrifying.

“I am super excited but at the same time a bit nervous because there are nuances and intricacies to being a lawyer. Law is an ongoing learning experience. Yuh have to try to sit at the feet of learned counsel so that they can teach you and guide you so that you do not end up on the wrong side of the law,” she said, pointing out that her Miss Kitty persona has no place in the courthouse.

“They are two different worlds that require two different skill sets. Law is very clinical. It’s not just about talking. You have to be able to read, analyse, critical thinking. Yuh haffi read in depth and widely. It’s a lot with which to contend, and so you have to adjust. So, for example, my pink wigs and green wigs have no place in the court. My yellow wigs have to stay on the stage at Sumfest,” she shared.

But it’s a challenge she says she is ready for.

“It’s a dichotomy, but if you challenge yourself to be multifaceted and not one-dimensional then it (adjustment) can be achieved. Yuh know a me say my colourful world, mi nuh used to black and white clothes, mi used to colour and used to mi things dem and the flashiness and the vibe, but in court and in the legal sphere, you have to have an equanimity of mind,” she continued.

“When is Miss Kitty time, mi turn it on, and when it’s not that time, me turn it off because there is a time and place for everything under the sun.”