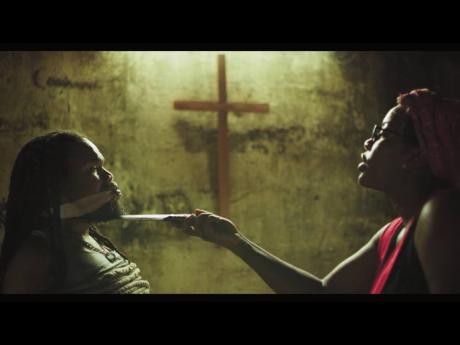 Contributed
Kadeem Wilson (left), who plays the role of Algie, is interrogated by Sherando Ferril, Elsie, in a scene from the short film ‘Sweet Rind’.

Despite the impact of the COVID-19 pandemic, the local entertainment industry is still making its mark globally, with films such as Sweet Rind striking it big on the international stage. A local production, it recently picked up some seven film festival awards.

The short film – directed by Andre Wynter and starring Sherando Ferril, who plays the role Elsie and Kadeem Wilson, Algie – centres around a pastor’s daughter seeking revenge on her sister’s killer, who had also scammed her father’s life savings, leading to his death from a heart attack. The movie follows her quest for justice in her father’s unfinished church basement in Kingston, Jamaica.

Ava Maria Campbell, the marketing director for the production, told The Gleaner that she is very proud of the growing impact of the film and its growing list of achievements especially in light of the pandemic. “I think the opportunity that it (the pandemic) presented is that we have been able to attend, virtually, quite a number of film festivals. Possibly, based on clashing dates, among other factors, we might have not been able to attend most of them physically,” said Campbell. “We did get quite a bit from the experience as we spoke to other film-makers and personnel associated with the film industry. I guess COVID-19 was sort of a blessing for this aspect of the film industry.”

In looking forward to expanding Sweet Rind into a full-length film, Campbell believes that although they got to make some important connections virtually, it’s not the same as a face-to-face experience, as they missed out on the opportunity to make real inroads to attract big names and investors.

“Film festivals usually have massive amounts of film-makers turn out to watch the films, including huge celebrities, so those people and potential connections could have been made in a physical space. We are expanding the film, and we are looking for those brand names to come in and work on our (extended) film, as well as investors,” said Campbell.

“We did get an opportunity to speak to a few of them virtually, but you are looking at thousands of film-makers in that virtual space. You know, as Jamaicans we are very creative when it comes to getting seen, so being in that physical space would probably be a better outlet,” added Campbell.

The production team is hoping that the pandemic will dissipate in another few months so that they may resume filming on set for the full-length film later next year.

• Best Actor and Best Actress, with a special mention for Shorts Directing at the LA Sun Film Fest in Los Angeles, California, in the United States