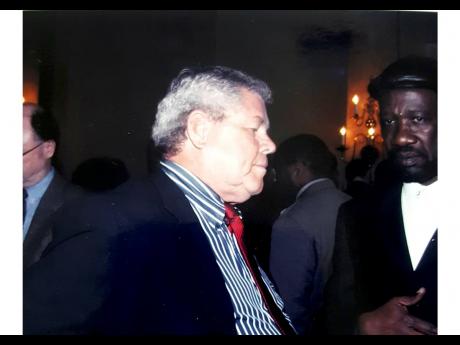 Contributed
Leroy Brown (right) and his former boss, Gordon ‘Butch’ Stewart. Brown says Stewart loaned him an Edmond box guitar in 1969 that would go on to be used to teach many musicians to play, including Robbie Shakespeare of Sly and Robbie and Aston ‘Family Man’ Barrett, the former leader of Bob Marley’s backing band. 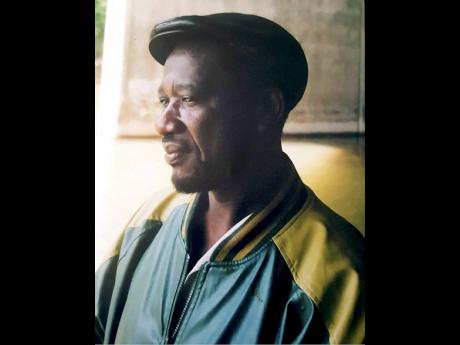 In 1969, not long after Gordon ‘Butch’ Stewart started out in business, his graphic artist, Leroy ‘Artist’ Brown, went to his then Graham Heights residence in St Andrew to paint the ATL (Appliance Traders Limited) and Fedders air conditioning logos on a vehicle. While there, Brown saw an instrument that would arguably help to change the face of reggae music: an Edmond box guitar.

Brown, who was very interested in music, knew immediately that he had to have that guitar, so he asked Stewart if he could borrow it. “Borrowing it was easy. Butch was a kind man then, and he never changed in all the years I know him,” Brown told The Sunday Gleaner “Although I said ‘borrow’, I knew there was no way that Butch was going to get back that guitar. There were too many of us who needed to learn off it,” he added with a laugh.

Among the many persons who learned to play off that guitar are two whose names are well known as they went on to distinguish themselves as master guitarists – Robbie Shakespeare of the famous Rhythm Twins, Sly and Robbie, and Aston ‘Family Man’ Barrett, the former leader of Bob Marley’s backing band as well as co-producer of the albums and the man in charge of the overall song arrangements. Shakespeare, incidentally, always pays tribute to Barrett as his teacher and mentor. In 2012, Family Man received a Lifetime Achievement award from Bass Player magazine, and both he and Robbie were last year named by Rolling Stone Magazine on its ‘50 greatest bassists of all time’ list.

Brown explained that he and Family Man’s brother, Carlton, were members of a group called The Hippy Boys, and he and Robbie’s older brother, Lloyd, were members of The Emotions. In the early ‘70s, he migrated to Canada, where he pursued both music and graphic arts and is a winner of a Juno Award, the Canadian equivalent of the Grammys. He left the Edmond guitar in the possession of Lloyd, who was living at Jakes Road in Kingston at the time.

“I had planned some years ago to surprise Butch and return the guitar to him, but we cannot find the instrument. We have searched everywhere, and Lloyd has passed, so is not like we can ask him,” Brown told The Sunday Gleaner.

Noting that he had remained friends with Stewart throughout the decades, Brown said that Butch and Robbie Shakespeare had met, and there was also another relationship that had nothing to do with the box guitar. “Robbie’s brother-in-law was Butch’s first driver,” Brown disclosed.

He hailed the late business and hotel mogul as “a gentleman and a scholar and a man who fame and fortune never changed”. He said that when Butch was relaunching Air Jamaica in Canada in 2003, he asked him to perform at the event, and also when he returned from Canada, Butch gave him letters of introduction to all his friends to assist him with getting jobs.

“Butch was interested in the welfare of his workers, and he even got one worker bailed on Christmas Day. And he never forgot anything you did that he considered out of the ordinary. He once told me that he always remembered how in the early days I used to travel with the crew and paint the vehicles while on the road. What used to happen is that when the guys went to install an a/c unit, the hour or two that they spent doing it, I would use that time to paint the logos on the vehicle. Butch didn’t have enough vehicles, and he so couldn’t afford to take one off the road for entire day while I was working on it, so that was the solution. I was the person who painted the logo on his very first Mercedes Benz,” Brown said with pride.

The singer and musician, who has released albums including True Confessions and Leroy Brown and Friends Volumes 1 and 2, now works from his own private studio and also at Sly and Robbie’s One Pop Studio on Red Hills Road. He says that he would have loved to have played a tune for Butch on the Edmond box guitar, and although that is no longer possible, he pledges to continue the search.

Brown is glad to have been associated with Stewart. “He is one of the greatest human beings I have met in my entire life,” he told The Sunday Gleaner.