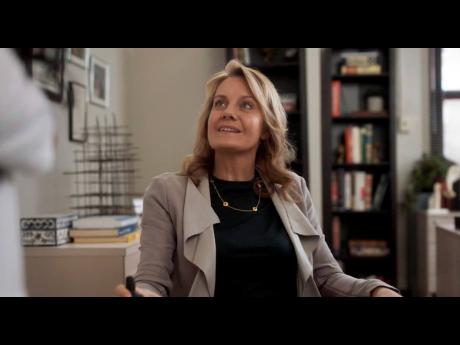 AP
Actress Eileen Grubba in a scene from ‘New Amsterdam’. NBCUniversal said Friday that actors with disabilities will be included in auditions for all new productions, an agreement sought by the Ruderman Family Foundation, a disability rights advocate. Grubba, an actor and disability activist, said NBCUniversal’s action, coupled with that of CBS Entertainment, could lead to wider change.

Actors with disabilities will be included in auditions for each new film and television production at NBCUniversal, which becomes the second major media company to make such a commitment.

The pledge was made in response to calls for change by the Ruderman Family Foundation, following a similar commitment the disability rights advocate received from CBS Entertainment in 2019.

“My hope is that other major studios in the industry will now see NBCUniversal and say, ‘This is something that makes sense, and we’re also going to commit to this,’” said Jay Ruderman, head of the Boston-based foundation. Disney, Sony, and major streaming services, including Netflix and Amazon are among others the foundation would like to enlist, he said.

As more people with disabilities are seen in roles, “it will have ramifications throughout society”, Ruderman told The Associated Press. Comcast-owned NBCUniversal signed on after a series of conversations with the foundation, he said.

The company is committed “to creating content that authentically reflects the world we live in, and increasing opportunities for those with disabilities is an integral part of that”, said NBCUniversal executive vice-president Janine Jones-Clark, whose portfolio includes film, TV, and streaming inclusion.

Outside calls for action are important and “hold the industry accountable for the work we still need to do in order to see systemic change”, Jones-Clark said in a statement.

Actor Kurt Yaeger, a member of the SAG-AFTRA Performers with Disability Committee, lauded the new agreement. “It’s what I’ve been pushing for 10 years,” he said, given how infrequently studios and producers open the door to people with disabilities.

Yaeger, who uses a prosthetic leg because of a motorcycle accident, has appeared as a guest actor in more than 50 TV episodes, including ABC’s The Good Doctor and Netflix’s upcoming Another Life. That’s more “than most people who are reading (auditioning) for series regular roles. And I’m not, and there’s only one reason why,” he said.

While NBCUniversal’s commitment is a “great start”, Yaeger said. He wants to see every other network and studio do the same thing and allow their progress to be monitored.

Eileen Grubba, an actor and disability activist, said NBCUniversal’s action, coupled with that of CBS Entertainment, could lead to wider change. Grubba, whose credits include HBO’s Watchmen and NBC’s New Amsterdam, already considered both companies to be leaders in disability diversity.

“The two of them together, standing up and saying, ‘This will happen, this will be done,’ puts pressure on the rest of the industry,” said Grubba, who uses a leg brace because of childhood spinal cord damage. “This is a massive win for this community and for inclusion, and, hopefully, for all the people who have been in this industry many, many years without ever getting opportunities.”

The growing pressure on movie and TV makers to give women, people of colour, and the LGBTQ community greater representation may have increased awareness of one of the country’s largest and overlooked minority groups, Ruderman said.

According to the Centers for Disease Control, 26 per cent of the US population has some form of disability. Their near-invisibility on screen, both as characters and actors, influences how the community is perceived, Ruderman said.

“Not seeing people who have disabilities in film and on TV does impact society. It does shape attitudes,” he said. Three decades since passage of the Americans with Disabilities Act, unemployment remains high among people with disabilities and “a lot of that has to do with stigma”.

”I don’t think you can mandate through legislation how people feel. But I think that entertainment can change the way people feel,” Ruderman said.

Although the agreement with NBCUniversal doesn’t establish hiring goals, Grubba said the value of getting a chance to audition shouldn’t be undersold.

“It requires repeated attempts to get good at it,” she said. “And when you’re competing against people who audition 10 times a week, and you’re only getting in one to three times a year, if you’re lucky, you don’t have the same skills in dealing with the pressures and the best way to get through them.”