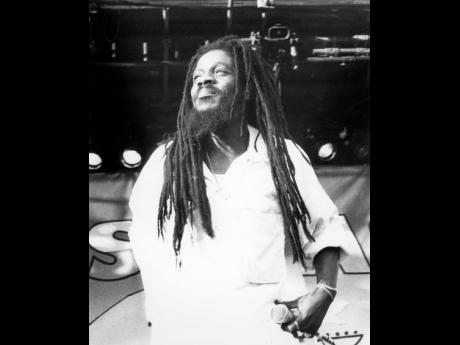 Voice Photo
The 64th birthday anniversary of reggae legend Dennis Brown is today. Brown is one of the artistes whose unheard and unreleased songs are included in Studio 17’s archives. 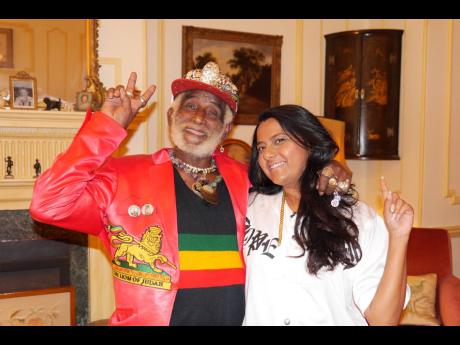 Contributed
Master reggae and dub producer Lee ‘Scratch’ Perry and Reshma B, producer of ‘Studio 17: The Lost Reggae Tape’. Perry is one of many reggae luminaries featured in the documentary.
1
2

“There are many layers of roots intertwined making up [reggae’s] history,” these are the words of Reshma B, who, from one interview with record producer Clive Chin, unearthed stories which once combined metamorphosed into the fertile feature-length Studio 17: The Lost Reggae Tapes documentary, which had its US premiere today.

The documentary, which is a collaboration between Widestream Films and Iambic Dream Films, in association with BBC Music, follows Chin’s battle to secure the rights to the archives of the legendary Randy’s Records and Randy’s Studio 17, formerly located in the heart of downtown Kingston at 17 North Parade and founded by his father, Vincent ‘Randy’ Chin.

“It all started with Clive playing songs I hadn’t heard before, songs I couldn’t recognise and so, the interview tunnelled into another direction. Originally, it was going to be about history and talking production, but now, there were the tapes he found when he had gone to the property, which was left abandoned for decades after the family packed up and left Jamaica for the US to escape the political turmoil in the 1970s,” Reshma B told The Gleaner.

“He was like, ‘They’re not out’. [Being] present for the digitising process of these tapes was an eye-opener because it was a lot to take in, listening to some of the artistes bantering and laughing as they participated in their studio sessions,” said the producer and journalist, who credits her upbringing in the multicultural West London to her passion for reggae music.

The Studio 17 archives contained hundreds of reels featuring many unheard and unreleased songs by reggae recording legends, one of them being Dennis Brown, whose 64th birthday anniversary is celebrated today on February 1 and kicks off the worldwide celebration of Reggae Month. Somehow the musical treasures survived years of neglect as well as looting, Hurricane Gilbert, and the heat of the tropics.

Dennis Brown died on July 1, 1999, at the age of 42 and there have not been any new music releases heard from the proclaimed ‘Crown Prince of Reggae’, until now. Vocals he recorded at 16 years old and left incomplete were resurrected from the archives, and Chin teamed up with producer and musician Dave Stewart of Eurythmics to add the finishing touches to the love song which is featured in the documentary. Dubbed from its hook, When You Get Right Down To It, Reshma B described the song as “a special treat”.

“I don’t know if we can say he is resurrected as the artiste, but there aren’t many instances where a Dennis Brown track appears out of nowhere, and so it’s nice to know there will be new music. He is an international figure for reggae music and we celebrate his music all year round,[so] this is a song reggae lovers are going to want to listen to,” she said.

The structure and rhythm of the film are perhaps a little familiar, but then so is the music, which is part of the sentimental appeal. In addition to featured music, Studio 17: The Lost Reggae Tapes includes original interviews with other luminaries of the reggae genre, those who are living, including Jimmy Cliff, Lee ‘Scratch’ Perry, Ali Campbell of UB40, King Jammy, Sly Dunbar, Maxi Priest, Lord Creator and Ernest Ranglin; and those that have passed, such as record producer Bunny ‘Striker’ Lee, who passed away in October 2020.

“To do the documentary is an honour for me, because some of the recording artistes who are featured, like Brown or Peter Tosh, I wasn’t around to witness their greatness in their prime. Not only that, each story is unique and to dive into the project has opened up a lot more. There are not enough films about reggae and there are so many more untold stories to be told,” Reshma B pointed out, noting that the entire project kept her occupied for six years until its completion.

She added, “It was complicated to decide how the stories would be used … of course, as a producer, you don’t want to cut out any story.”

Reshma B worked tirelessly along with executive producer Waël Kabbani; director Mark James and one of UK’s leading documentary editors, Paul Burgess, to bring Studio 17: The Lost Reggae Tapes to life. By the end of 2019, it was complete and garnered approximately half-million views within the first week of its debut on BBC Four, surpassing all expectations, with David Rodigan of BBC 1Xtra saying it is “a magical piece of work ... fascinating insight into the earliest period of the music”. And critics like SiriusXM’s Pat McKay calling it “a good slice of truth that is going to inspire other stories to be told, because the truth doesn’t go away”. It was also introduced to the film festival circuit; however, the onset of the pandemic disrupted their plans to take it further.

“One of the reasons I, along with the rest of the film-makers, pushed to make it available, is so that globally, not only music specialists, but persons who love reggae and those who take the time to watch it can appreciate the roots of its story. You have stories weaved in, like that of Lord Creator, the original singer of Kingston Town, who became homeless … so it talks about the economics of the business from those not compensated for their contributions – the rise of the genre and the artistes from humble beginnings,” she said.

The 90-minute-long documentary will be available on Qwest TV, Quincy Jones’ video-on-demand service for Reggae Month, and for a limited time on Tidal.

“I can only speak from my own experiences with reggae because it dates us, but when you listen to the music and the messages, you realise it has been preparing us for these types of times – like a pandemic which has caused loss, isolation and separation. It was born out of the need to survive, and the teachings have forever been about survival,” Reshma B concluded.