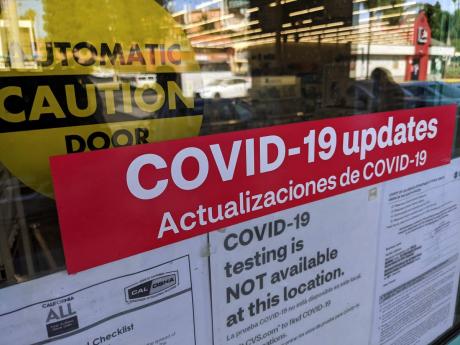 AP
COVID-19 has already significantly impacted the entertainment industry. Could it also change how artistes are booked for performances? Music industry executive Neil Robertson thinks so.

It has been one year since the global entertainment industry was placed under lockdown following the outbreak of COVID-19. With a ban on large public gatherings still in place for many countries and a new strain of the virus now spreading, it is unlikely that any semblance of normality will return to the sector for 2021. For music industry executive, Neil Robertson, it may very well be 2023 before the entertainment industry is given the green light to operate as it did pre-pandemic. And even then, Robertson believes the industry has been so altered by the effects of the virus that certain relationships will never be the same.

One such dynamic he expects to undergo drastic alterations is the promoter-artiste relationship. Robertson explained that because of the uncertainty that continues to loom over the industry, artistes may have to start sharing some of the expenses promoters were once responsible for. He said that the days when a promoter was responsible for an artiste’s (and his/her entourage) airfare and accommodation may be over, noting that these costs may now be one the artiste incurs.

“Everything about that artiste-promoter relationship is going to change and if you approach it the way you approached it pre-pandemic, you’re going to be out of the game because it’s not going to work like it used to work. The promoter doesn’t even know if you’re going to even get to his show. I mean, if anyone has to get quarantined in the (artiste’s) party and all of a sudden the artiste cannot even go to the festival/concert grounds. Who pays the hotel bills? Who pays the food? What happens to the deposit?” Robertson questioned.

He said that promoters, wishing to reduce risk will cut costs. “A lot of those losses will fall on the promoter side and they’re going to want to reduce that risk and so artistes are going to need to stand some of those costs because a promoter is now going to become increasingly hesitant to take on all of that risk,” said Robertson.

Indicating that a lot of the interactions between local entertainers and promoters over the past few decades have been informal, Robertson expressed that is also a dynamic that will have to change. He explained that in order for the industry to successfully operate at optimal level post-pandemic, the local music industry and its players will have to take on a more professional approach. He went on to say that now, more than ever, people will begin to recognise the importance of contracts.

“Most promoters that artistes are exposed to in Jamaica are like fans wanting to do a show as opposed to a business person. That will have to change as the sector readjusts. We may very well see the beginning of an industry that will be about shared risks, artistes will as I said have to take on more of the risk than they were used to and so now more than ever, contracts are going to be extremely important,” he said.

“Players in the local industry are therefore going to be forced to become more professional. It cannot be business as usual. Any and everything will now have to go down in writing as it relates to the duties and obligations of both parties. It will be all about professionalism and less about ‘friend thing’.”

While agreeing that the movers and shakers at the helm of the music industry will have to step their game up as far as professionalism is concerned, artiste manager, marketing and public relations specialist, Tara Playfair-Scott, said she does not foresee that much else will change. While admitting that she cannot predict the future, Playfair-Scott said based on adjustments being made in other sectors in light of the pandemic, it is unlikely that the artiste-promoter dynamic should undergo any drastic changes. She pointed out that with the availability of rapid testing, booking an artiste under the same obligations one used pre-pandemic should not be an issue.

“In relation to the US, a COVID test is required – a PCR (nose swab) I believe – within 48 hours of travel. So if the artiste meets that requirement and has the requisite travel and work documents, I don’t see how it changes anything that’s normally in the agreement,” she said. “The sensible thing (for promoters) to do would be to book travel a few days in advance as opposed to the day before or the day of the event. I don’t see why an artiste should be standing the cost of airfare and hotel, etc.” She also indicated that airlines and hotels have flexible deals in place that allow persons to accommodate ticket and room cancellations without penalty.

As it relates to the 50 per cent deposit that is normally paid over to an artiste before making an appearance to secure the date, Playfair-Scott says that should still be taken care of under the ‘Act of God’ clause normally stipulated in contractual agreements. In that clause, it ‘excuses’ non-performance, or delayed performance due to circumstances beyond the artiste’s control. It is typically invoked in the wake of natural disasters but can apply in other categories of unforeseen events including COVID-19.

“Natural disasters or ‘Acts of God’ have always been noted on agreements so if the world goes back on lockdown days before travel, that’s not the artiste’s fault,” said Playfair-Scott. “The world has adjusted (to COVID-19) and now we (the entertainment industry) have to as well. And really, if we approach this professionally, there aren’t any excuses.”