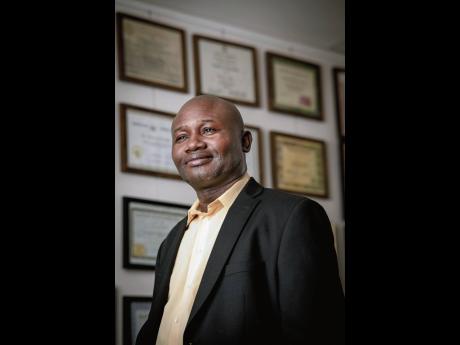 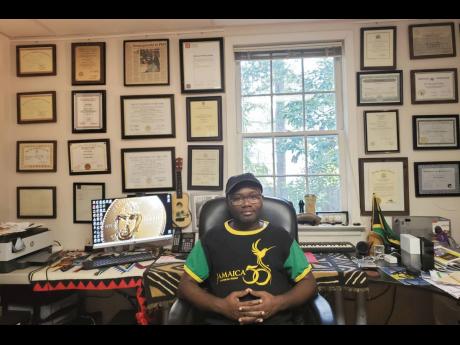 Contributed
Dr Fuller at his home lab in Atlanta. 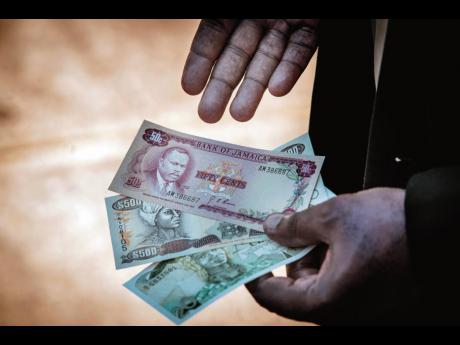 Contributed
Money is a source of power, but also who is on the money is important. 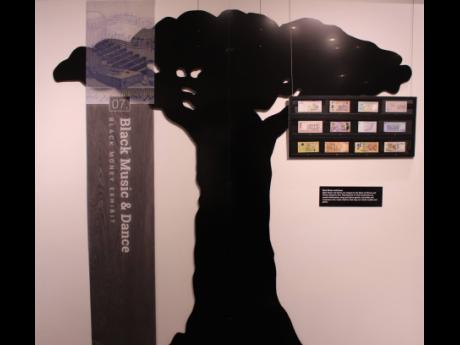 Fulbright global scholar and history professor, Dr Harcourt Fuller, is a non-traditional academic who is as fascinated with money as he is with music, and has found a way to merge his loves. His love for money has absolutely nothing to do with its spending power, but rather everything to do with its history. And that has led the kid from the inner-city, the music-rich community of Trench Town in Kingston, to pursue his dream of “edutaining” through an initiative which intertwines a money exhibition, an international, multi-genre soundtrack for the exhibit, as well as a documentary.

“I recall playing under a neighbour’s cellar one day and found an old wallet with a Jamaican 50 cent banknote with the picture of Marcus Garvey. I took it to an adult and that was the last time I saw that note. It used to be the lowest value banknote in Jamaica until it was replaced by a coin in 1976,” Fuller told The Sunday Gleaner. That, however, was the genesis of his ‘Black Money’ exhibit, which started as a quest to find a similar note and which led to a keen interest in numismatics. “Money is not just something to spend, it is really history,” he added.

The travelling and online exhibition called ‘Black Money: World Currencies Featuring African and African Diasporic History and Cultures’ was launched in Atlanta in 2018, and Fuller is immensely proud of his “money trees”, which showcase rare, obsolete, and currently circulating banknotes. The exhibit presents and interprets 10,000 years of black history as visually represented on money.

A Source of Power

“Money is a source of power, but also who is on the money is important. We all want money and more of it, but do we ever sit and ponder who were these people pictured on the money. There are more than 300 images of Africans and historical sites reflected on bank notes, so this exhibit is telling the history of black people through money,” he said, warming up to his favourite topic.

Harcourt, however, is equally thrilled about the newest project, the musical side of the money exhibit and the documentary. “I am extremely excited. When you are in academia, it can be an ivory tower, so it is good to come out of the tower and be able to combine music and academia and present a project that interprets black history for thousands. When I decided to do a soundtrack for the project, I linked with Roehampton Production, a New York-based entertainment label co-founded by my nephew Kimoy ‘Pustinho’ Fuller and we reached out to artistes in Brazil, Ecuador, US, Canada, England and Jamaica,” he explained.

He and his team are in the process of voicing the songs and have a release date of June 19, also known as Juneteenth, a historical date in Black History in the United States. It will be on Fuller’s Katawud Music label.

“I am trying to strike a balance between music and history. It cannot sound like a lecture, it has to sound musical,” said Fuller, who is the brother of award-winning reggae and dancehall producer, Jah Sno Cone.

Production for the Black Money Exhibit soundtrack got under way last year, and for the album’s first track, the team linked up with Atlanta artiste JA Outlaw and producer Brilli. Described as an upbeat 90s-style dancehall song with a modern twist that name-drops different currencies used in Africa and the African diaspora, Black Money calls for black people to invest their money in assets, build wealth, and have more representation on their currencies. It is available on all major digital music platforms.

Scheduled for a Black History Month (February) release is a song titled Mansa Musa, which was recorded in Cape Coast, Ghana and performed by a Ghanaian group called Family Core Entertainment. “Mansa Musa, the emperor of the 14th century Mali Empire in West Africa, is said to be the richest human being who ever lived. His wealth from the gold and salt trade would be valued at over US$400 billion today. This music video was shot in Ghana and this is very special to me as a Maroon,” Fuller, who holds a PhD in International History from the London School of Economics, stated.

Immensely proud of his Maroon heritage, Fuller, in 2015, produced a one-hour documentary, Queen Nanny: Legendary Maroon Chieftainess. It won Best Documentary at the 2016 Newark International Film Festival, a Spirit Award at the 2016 Reel Sisters of the Diaspora Film Festival, and was nominated for an Africa Movie Academy Awards (AMAA) honour at the 2016 Pan African Film Festival

For the Black Money music project, Fuller also returned to his roots in Trench Town to collaborate with father-son duo and producers McA-Lion & Bingi and their Rootz Impact Band, to record a one-drop reggae song titled, Queens and Empresses performed by up-and-coming artiste, Annajé.

Fuller plans to bring the Black Money Exhibit soundtrack home by having an album release and charity event in Jamaica later this year.