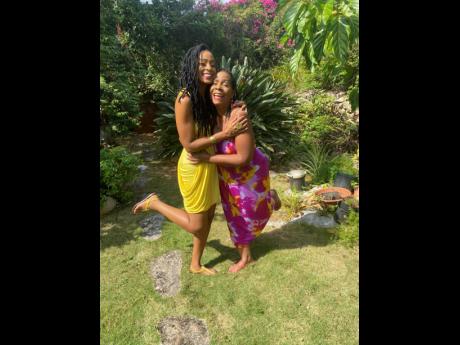 Contributed
More important than having millions of subscribers, mother and daughter said their biggest hope for the channel is that it will make people happy. INSET: The duo perform at a Women’s Day event at The Jamaica Pegasus hotel. 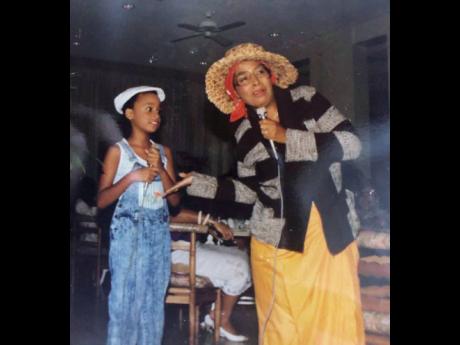 Contributed
The duo perform at a Women’s Day event at The Jamaica Pegasus hotel. 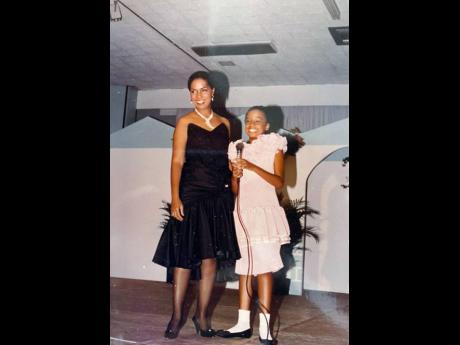 Contributed
Alaine and her mother, Myrna Laughton, perform at The Jamaica Pegasus hotel at a concert named Celebrities and Their Children. The elder Laughton said she knew at an early age that her daughter would be a performer.
1
2
3

Through her infectiously funny character ‘Hilda, di vibes Builda’ singer Alaine Laughton has been showing Jamaica, and the world, that she is entertainment personified. Through short skits uploaded on social media, the multi-talented entertainer has been allowing her fans to see parts of her they were not necessarily used to and based on reactions, they’re absolutely loving it.

Recently, viewers have been getting a glimpse of who and what moulded Laughton into the talent that she is. The singer has thrust her mother into the social media spotlight through their Mama and Me YouTube channel. The channel, which is only just three weeks old, has been garnering lots of attention as viewers soak up the love, light, and laughter Alaine and her mother, Myrna Laughton, have been bringing to the space. But other than dishing out unadulterated entertainment, the vivacious duo says the channel was created as a safe space to showcase the importance of the love of family.

In an interview with The Sunday Gleaner, the pair spoke about their strong mother-daughter bond. Describing it as a connection forged from the womb, Mama Myrna recalled the very moment she learnt she was having a baby girl. “I have five sisters, and all of them had boys first. So I was always guessing that when I have a baby, I am going to have a boy, following the trend. Well, when they tested my tummy and they heard the heartbeat, I don’t know if it was scientific, but they say girls’ hearts beat much much louder and stronger than boys, so they said it was a girl,” she recalled.

“I said no, is a boy, and her father, Courtney, who was visiting at the time (because I was in America), had planned to leave the next day, and I was so disappointed that he stayed another day to kinda console me. Then afterwards, I said if it’s a girl, she must be the sweetest, nicest likkle thing that God ever make, and I just started falling in love with her from that time,” said the elder Laughton.

Alaine, who was hearing that story for the first time, was shocked to learn that her mother was not initially excited to have been expecting a baby girl. She was surprised as she asked, ‘Hol’ on! Weh yuh just say a while ago? You were vex that I was a girl? You were disappointed?” Concluding that they must have a meeting to discuss the details further, the two burst into laughter. The strength of their bond shone through, and it was clear that there were no hard feelings.

Reminiscing on early days with her baby girl, Mama Myrna shared that the two became best friends as they shared similar personalities. She also revealed that she knew from early on, from Alaine was a baby, that the creative industry would be her calling. “From she was a baby when she was crying for anything and I started to sing she would just stop. I knew from she was three months and the song Land of my Birth was playing, and Alaine was on the bed and started moving to the riddim and moved down to the edge of the bed and I had to just grab her, that she got our talent. The entire family is like Alaine is,” she said. “I, myself, [have] always been in the entertainment world. I used to do make-up, working on a lot of videos. I used to do the Jonkanoo Lounge cabaret. Sometimes I did it on the north coast. I did pantomime. I wrote one of the episodes on the Oliver At Large series. I did a play which was extremely successful, and so I have always been this creative as well.”

Pointing out that her love for her mother goes way beyond the fathomable, Alaine said although she wanted to share the light that is her mother with the world, she had reservations about putting her into the spotlight. Knowing all too well that the social media space can be very cruel, Alaine said the two had to weigh the pros and cons of starting their Mama and Me channel before actually taking the leap. “Mommy is so infectious, such a bright light, that she attracts people’s attention very easily by just being her vivacious self. So, I was like ‘Let’s do a YouTube channel because we could have so much fun’. But I did have reservations. I am very fiercely defensive and protective of her, and so before I even put her up on Instagram, I explained to her the kind of elements that one is exposed to on social media. She said ‘Cho, dat nah go bother me at all’, and I saw how much she really just wanted to do this for the fun of it, and so I said all right” she said.

Mama Myrna, showing how very headstrong she is, told The Sunday Gleaner that she was well aware that negativity could rear its ugly head along their vlogging journey. But she could have cared less. “People only throw stones at a mango tree that ripe and have on mango,” she wisely posited. “That mean if yuh not doing anything, nobody not going to notice yuh. Is when you doing things that people will see, and everybody not going to like it. Some will love it, some will hate it, and so what. No matter what you do, people will talk.”

Having taken that leap of faith, the two are now expecting the channel to grow from the very space of love and laughter that it was created. More important than having millions of subscribers, the duo said their biggest hope for the channel is that it will make people happy. “Our intention is just to make people laugh and smile, and I think people need that. So far, this whole experience has been really amazing. Me and mommy really siddung and laugh at the comments and say ‘Thank you, God. This is so amazing’ because there are people who are saying this is what’s keeping them company. People can identify with it (the content) because we’re just being ourselves. We are in our natural element because what you see is really how our household stay,” Alaine said.

“Before this I was so bored because every day all I do is siddung and play Sudoku because it keeps the brain going. This thing is the best thing that coulda happen,” Mama Myrna continued. “A girlfriend of mine said to me, ‘Myrna, at least yuh doing what yuh love again because it really just comes so natural’. It gives me a sense of satisfaction because this is how I have always been with my friends. I am always making dem laugh, and dem say, ‘Bwoy, Myrna, you are always the life of the party’ and I feel so happy when I know other people are happy because of my presence.”