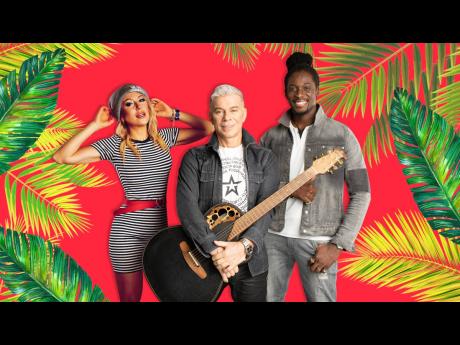 The dynamic shape-shifting Orisha Sound continues to drift across international borders with a mission to make music that spreads inspiration and connects their worlds. Using that motion as a musical duo since 2017, American multi-instrumentalist and singer of Brazilian-Russian descent Orisha Pelzer and St Thomas-born producer and musician Sheldon ‘Shel-K’ Williams have created a signature space that align them closely with Jamaica’s current forward-thinking ‘out of many’ culture.

A chance meeting of the two entertainers with Russian superstar Oleg Gazmanov – a man known for songs of patriotism – on the red carpet of the major festival New Wave in Russia’s largest resort city, Sochi, transformed into a cross-cultural collision of creativity.

“Oleg noticed we were colourfully attired, especially Sheldon’s Jamaican hat, and immediately expressed his deep love for reggae music. Right there on the red carpet, he started singing, and in a matter of minutes, all the press and cameras surrounded us three, and the decision to do a collaboration happened,” said Pelzer.

The collaboration, which is titled Jamaica, is birthed from Gazmanov’s 1989 single Reggae Reggae, to which Pelzer and Williams were able to add their unique touch.

The Russia-raised entertainer said, “As a musician, I love all the styles and especially when the styles blend and create something new that is also beautiful. Music is my language. Jamaican people naturally love and understand music, so Sheldon and I understood each other from the start.”

The award-winning Orisha Sound has been performing and making live television appearances in Russia as well as touring across Europe, appearing at events such as Notting Hill Carnival 2019 and FIFA World Cup 2019, and although 2020 brought with it challenges, Pelzer told The Sunday Gleaner, “Instead of seeing the problems, we focused on solutions and the possibilities.”

She continued: “We have been very active with our followers on social media. And as COVID-19 caught us in Russia, with all the venues closed, we organised a nine-city tour in major Russian cities, performing outside. This made people see that our music and message is real and they relate to us even more.”

“To my surprise, the people didn’t know much about reggae and dancehall, but still showed appreciation each time we performed. It’s amazing how people, who were not exposed to the genres, open up to Jamaica-born music. Old and young will sing back our songs and dance [along]. This is a power of reggae music,” Williams said of reggae’s presence in Russia.

The collaborating trio premièred Jamaica to an audience of 6,500 at the groundbreaking concert at the historic State Kremlin Palace in Moscow a year ago, just after the production of the song was completed. However, it was officially released in December 2020. The song is symbolic of 45 years of diplomatic relations between Russia and Jamaica, celebrated in 2020. Orisha Sound also marks the second anniversary of their album Fire n Ice, which, with its 12 inventive electro-dancehall and reggae songs that have a hint of colourful Caribbean sounds, is described as a very sweet triumph for the international recording duo.

“The last two years we have heard people in Russia, UK, Africa, USA, Jamaica singing back our songs. It’s unifying and magical. So it was equally amazing to be on the main stage of the country. Kremlin has seen many artistes and world leaders as one of the most prestigious concert venues. It was full to capacity, and the reception was great as a song that makes everyone dance and clap along,” Williams said.

He added, “It is very important to understand the various cultures across the world, and music, being as powerful as it is, can really make a difference in that cultural exchange. It opens up new possibilities and new frontiers for reggae music.”

Orisha Sound completed their Russian tour with a sold-out final show in St Petersburg in December and yearns to be back in Jamaica. The last time the duo performed on the island, where they have made a home, was at the International Reggae and World Music Awards in 2019, which they won the following year. At the moment, Pelzer and Williams are preparing to headline the Color & Sound Festival in the spring season this year, where they will be presenting songs like One Way Trip, another patriotic ballad, with Russian traditional instruments such as the balalaika, domra, and harmonica.

“Our home is in Jamaica, and we miss it so much. We truly can’t wait to be back in our house to see the beautiful view and wake upto the sunrise,” said the musical duo.