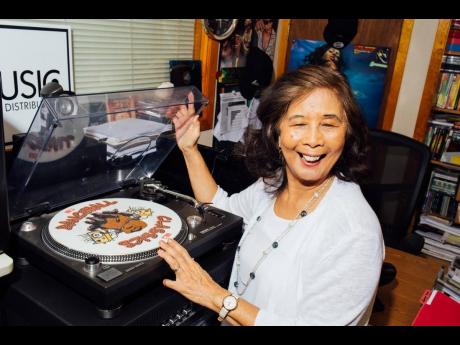 Contributed
Patricia Chin’s fascinating journey from her humble beginnings in Greenwich Farm in Kingston, to the very pinnacle of a male-dominated industry, has been captured in the coffee table book, ‘Miss Pat: My Reggae Music Journey’, which has a highly-anticipated North American release date of March 17. 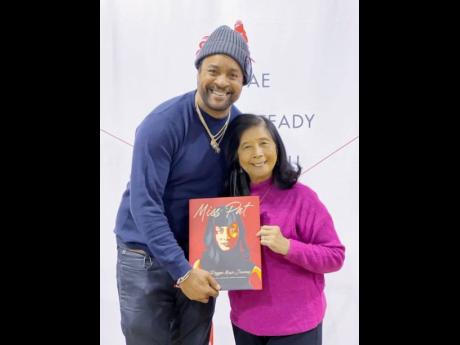 In the same way that plans for a simple scrapbook of treasured memories somehow morphed into a 212-page hardcover, with 220 photos and illustrations, the story of VP Records, the world’s largest distributor of reggae music, bears a striking resemblance. VP started simply, with its owners “buying one-one record”, which led to the opening of a landmark retail store, Randy’s Records, at 17 North Parade, in downtown Kingston and eventually the building of a global music empire.

“I wanted to document something for my children and grandchildren,” the affable Miss Pat, VP Records matriarch, told The Sunday Gleaner of her book project. “My parents never shared their story of how they came from India and China to Jamaica. I wanted my future generations to know the struggles, the joys, who I am, and who they are,” she added.

Her fascinating journey from her humble beginnings in Greenwich Farm in Kingston to the very pinnacle of a male-dominated industry has been captured in the coffee table book Miss Pat: My Reggae Music Journey, which has a highly anticipated North American release date of March 17, 2021. “It tells the story of a family owned-and-run business and a deeply important and inspiring American immigrant success story, and at its core, beyond the star-studded, legendary musical names that whiz by the reader at dizzying speeds, it is a book about family, love of home and homeland, perseverance, and business agility,” the publishers say.

VP, the initials that stand for Vincent and Patricia, the husband-and-wife duo who, several decades ago, started out in business, is a symbol of endurance in a business that has seen a plethora of record labels start, get gobbled up, and disappear for a variety of reasons. Notably, VP’s longevity has absolutely nothing to do with the theory of business taught in halls of learning. “My husband and I didn’t go to any business school, but as the music evolve, we tried to evolve with it. We have seen the music move from vinyl, 7-inch and LPs, to CD, digital, and streaming,” Miss Pat said.

Short in stature and possessing the most charming personality that one could imagine, words like indefatigable and resilient come to mind when describing the sprightly 83-year-old grandmother and great-grandmother who goes to work every day - alongside sons Chris and Randy who oversee the operations - and who also has a diary full of engagements.

Born in Kingston, Jamaica in 1937, her father clearly knew that she was going to be a star. “My father named me Patricia after the Hollywood star Patricia Wymore [who was married to Errol Flynn and lived in Jamaica], and even my middle name, Dorothy, is also from an actress,” Miss Pat related.

But even with two movie star names, her first love was nursing, a career that she traded in for music. And Miss Pat has no regrets, not even during the trying period when violence forced her and her husband to take a decision to start a new life in foreign lands.

“Because of the riots, we had to pull down our shutters three or four times a day. We had to think about our life,” she said of the relocation to the United States. “It was very hard when we came here (the US) in 1977. We had to figure out where to put up shop, where to send the kids to school, and also get accustomed to the food and the climate. But fortunately, there was a lovely Jewish lady who taught us everything, from drinking black coffee to how to dress for the cold. She worked with us for 15 years.”

Miss Pat recalled that in those early days in the US, the buying public knew Bob Marley and Jimmy Cliff, but they didn’t know Dennis Brown, Gregory Isaacs, and all the other great reggae artistes. Therefore it wasn’t easy to simply replicate the structure in Jamaica. “Back home, we were a one stop because we would sell records for all the producers - Beverley’s, Coxsone, Leggo, you name them. All except Joe Gibbs, who didn’t want to give us his records. But I beg people to buy Joe Gibbs records and sell them same way,” she confessed, still quite tickled at the memory.

But Miss Pat was not deterred by their ignorance. It was her role to teach and do all she could to expose the music and artistes from her homeland, Jamaica. VP Records became a major player in the music business as producers and wholesale distributors of reggae as they established supply lines to record stores all across North America and became the world’s leading distributor of music from Jamaica and other islands of the Caribbean.

The company was so successful that by the early ‘90s, it was a no-brainer for VP to establish its own record label, recording from Shabba Ranks and Super Cat to Beres Hammond, Luciano and Sizzla to Sean Paul and Beenie Man. VP Records, by 2008, was able to buy out their biggest competitor, Greensleeves Records and Publishing. “They had the rights for England, and we had the rights for the US. We became very good friends, and it was a godsend for us to be able to be the ones to buy the company when it was being sold,” Miss Pat told The Sunday Gleaner.

She added: “I feel blessed to see that reggae music has taken over the world. At our 25th anniversary at Radio City Music Hall, my name was up there in the light. I remember that night so well and Elephant Man wouldn’t come off the stage,” the little lady who helped build a formidable reggae empire said with a chuckle.