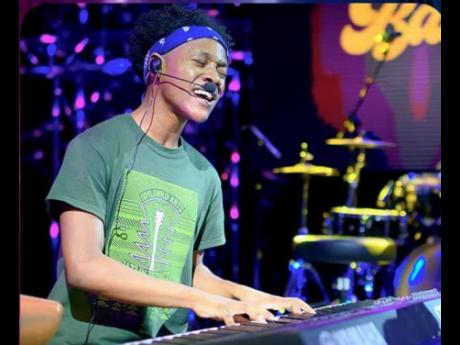 And then there was Joe.

Hailed as the Jamaican Jacob Collier, Joe Davis is music.

“I love this!! This is JAZZ AND BLUES!” a new fan shouted in the chat when Joe, dressed in T-shirt and jeans, with a bandana tied around his head, showed his mettle minutes into his performance. Totally at home surrounded by instruments, Joe made good on his promise to be memorable.

Recently accepted to the prestigious Berklee College of Music, the 17-year -old boy wonder, multi-instrumentalist, was a one-man band that gave a standing-ovation performance on the Band Quest stage of the Jamaica Jazz and Blues Festival. The chat dubbed him “phenomenal”.

Joe tickled away the keys, he played the guitar, blew and caressed the harmonica, sang soulfully, and he surely swelled his fan base. The only fault was that his set was too short, way too short for one with such brilliance.

A major in Jazz piano at the Idyllwild Arts Academy in California, Joe was so good that persons are ready for him to make his début on the festival’s big stage, not next year, but rather on Friday or Saturday night. When he sang and played the Carpenters' Close To You, the chat lit up even more. “Even if yu don’t love Jazz, this is phenomenal.”

After giving a fantastic acapella arrangement of the Star-Spangled Banner at a virtual ceremony in US Vice President Kamala Harris’ honour last month, Joe said he had hopes of using the Jamaica Jazz Festival’s international platform to make an even bigger impression on the world.

The Montego Bay son surely did.