Eye of the Brainstorm jams at Jazz festival tonight 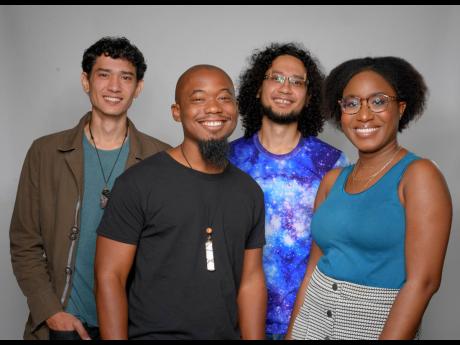 Contributed
Eye of the Brainstorm with perform on Night 2 of the Jamaica Jazz and Blues festival.

A talented group of musicians who will be bringing a jazzy, hip hop element to the Jamaica Jazz and Blues stage tonight is Eye of the Brainstorm. For many years, the band, which comprises five primary members: Joel Ashbourne on keyboard and vocals; Darryl' Kuki' Roberts on vocals and guitar; Tobi-Ann Brown on vocals; Jeremy Ashbourne on drums and background vocals; and Daniel Nepaul on bass, existed primarily in Jamaica's musical underground.

Thrilled to receive the invitation to perform, Jeremy Ashbourne commended the organisers "for taking on this weird group of musicians". They will be joined by veteran musicians Andre 'Spyda' Dennis on bass, and I-Sax in Jah – a Canadian saxophonist and flautist based in Negril for many years.

Eye of the Brainstorm is all about "being true to what inspires us". For Jazz and Blues, they will be performing two songs, their début single End of the Week, and Particollide. Additionally, some band members will be backing colleague musicians Moon, Earth and the Fullness, and Bunny Rose.

The EOB project started in 2013 with Joel and Kuki, who met at The University of the West Indies and decided to try their hands at a hip hop project. Jeremy was in Austria at the time, so the trio would collaborate over the ocean, writing and producing music. After returning from his studies abroad, Jeremy was one of the key players who rekindled 'The Jam is Back', a weekly jam session that became a popular feature of Kingston's live music scene.

Jeremy noted that despite being difficult to sustain, it was an important social spot for creatives. "The musicians ranged from unknowns to professionals. We had bands from overseas turn up, too. In the musical underground, you can find acts that don't fit the mainstream reggae or dancehall identity, and who are uncompromising about what they want to express. The Jam facilitated [these acts]," he explained.

Jeremy himself has played on both the small and large stages at Jamaica Jazz and Blues. A special Jazz and Blues moment for him was taking time to hang out with Nora Jones.

"I really appreciate the fact that this is happening. I commend and appreciate that the Jazz team took the initiative and provided an opportunity for performances. Last year was rough, and people are unravelling. This is helping to make a difference," the musician said.