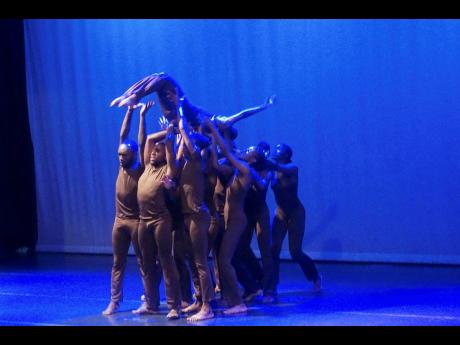 The group’s co-founder and artistic director, Monica Campbell McFarlane, was thrilled by the experience, especially because it afforded the group to finally make a contribution to a worthy cause in Africa,

“When we were contacted late last year to be a part of this, we thought it was a good way to start our 40th anniversary. We were also very excited because we have not had the opportunity to contribute anything, as far as Africa was concerned, before,” said Campbell McFarlane.

“We were just one of two acts that came from Jamaica, Julian Marley was the other,” added the artistic director.

The Africa Rise experience appears poised to open more doors for the group, based on the initial feedback from persons who have been exposed to their performances, which was streamed globally by ViacomCBS.

“After the first showing, they called me and told me that they got over 200 calls from people who wanted to know who Movement was and if they could come to places like South Africa, so we were very encouraged,” said Campbell McFarlane.

With Africa Rise providing the perfect platform to commence the celebration of four decades of rich performances, which has taken them to places like the United States, Britain, the Caribbean, Canada, and other major markets, the group is now looking forward to doing at least one major project per quarter for the remainder of the year. Another major highlight will be the 40th anniversary season of dance.

“We are scheduling it for November to make sure that, hopefully, we clear the worse of COVID. We will be bringing back some of the popular favourites, and we will have guest artists and some of the people who have been with us over the 40 years,” explained Campbell McFarlane.

In looking back at some of the highlights over the four decades, Campbell McFarlane said that beating the odds by surviving without any financial gains for so many years, speaks volume to their commitment.

“We do this because we have made a commitment over the years that we will build this area of the arts. Survival has been hard, because the arts is one of those areas that people think you can just brush your foot the night before and go on the stage. They don’t look at it like other professions that take a lot of rehearsal and preparation. And, in this era of the Internet, where people are exposed to other performances, they want a Broadway-like performance every time. We have done well over the years because we have been putting in the work,” Campbell McFarlane explained.

She said when they first came to the fore, the National Dance Theatre Company (NDTC) was the only dance company in Jamaica and many questioned whether Movement could survive alongside them.

“Nobody felt that another one [dance company] could come to the fore, because a number of efforts had been made over the years, but none were able to stand the test of time, except the NTDC, which really did some groundbreaking stuff in their journey,” said the veteran artistic director. “However, it was as if we opened the tank for another stream of companies to come through, and now I can’t even count the number of companies that we now have.”

Campbell McFarlane said they are now looking forward to renewal and building their legacy of the company post COVID-19.

“Right now we are seeking to position some of our younger, talented members to move up and take over the mantle. We have a lot of inspiring young people to support our mission. We are also looking at having a permanent studio and other things to strengthen the movement,” she said.

As she ponders the future and the long-term spin-off from their Africa Rise exposure, Campbell McFarlane’s hope is that the COVID-19 experience will not impact the Movement in any significant way, allowing them to continue with the same purpose they have been holding fast to since March 1981 when Campbell McFarlane, Pat Grant-Heron, Michelle Tappin-Lee and Denise Desnoes joined forces to create the Movements Dance Company of Jamaica.