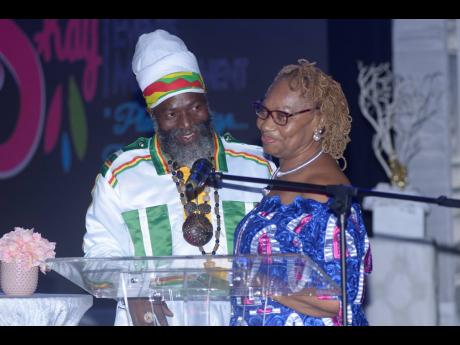 File
Claudette Kemp (right) is joined on stage by Capleton after she was given the Queen of Reggae Island Honorary Award in 2019. One of the few female managers in a music business, Kemp has managed the ‘Fireman’ entertainer for more than 21 years. 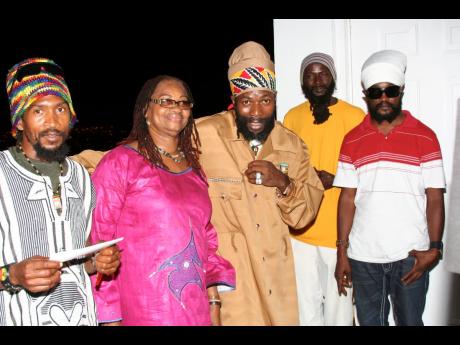 File
Capleton (centre), shares a light moment with his manager, Claudette Kemp, and his entourage during the 2008 launch of A St Mary Mi Come From.
1
2

Claudette Kemp is one of the few female managers in a music business dominated by males at every level. And not only has she held her own for close to two decades, but she has received the respect and admiration of many along the way, even being...

Claudette Kemp is one of the few female managers in a music business dominated by males at every level. And not only has she held her own for close to two decades, but she has received the respect and admiration of many along the way, even being crowned with the Queen of Reggae Island Honorary Award in 2019.

But Kemp, whose potato pudding is almost as legendary as the artiste she manages, said managing a reggae artiste was never on her things-to-do list.

She laughingly recalled that her first official meeting with the ‘Fireman’ Capleton was under “fiery circumstances”. And, believe it or not, the usually very calm and poised Kemp was the one blazing the fire.

“Capleton had taken my daughter out on a date, and he brought her back home after 2 a.m. That was unheard of! So, I was up and waiting when they returned, and I let him have a piece of my mind,” Kemp explained. But Capleton redeemed himself. “He was very respectful and apologetic, and even the next day, he apologised again,” she told The Gleaner.

Although Kemp, who was in real estate at the time, was the one who guided Capleton – by now a family friend – towards the route of homeownership and took an interest of sorts in his career, she was quite surprised when he asked her to be his manager.

“I told him a straight ‘no’. And he asked why. Well, I was looking forward to early retirement and had plans to travel, and to spend some time with my mother in Canada, plus I knew nothing about managing a reggae artiste,” Kemp said.

However, when she told a friend of the discussion with Capleton, and her decision, he was dumbfounded. “’What, don’t tell me that yuh tell ‘King Shango’ no.’ At that time, I didn’t even know that Capleton was called King Shango. Anyway, I discussed it with my children, and we decided that I would do it for one year. That should have ended in April 2003,” she shared.

All will agree that 2021 is many years past that due date, and when quizzed as to how she has endured for so long, Kemp’s answer was simple, “My main ingredient is L-O-V-E. You need to love and appreciate the person you are working with, and those who you meet along the way. With Capleton, it’s more like I am guiding someone rather than managing. He and my son are born the same year, so it’s a family vibe.”

Kemp, who also worked in the insurance field for a number of years, said her skills honed over the years proved quite useful on her new journey. “I was in corporate for years, and the same basic management principles can be applied to most situations. What I do is find the leaders around and delegate. I have a team, whether formal or informal, and, especially on the road, it is vital to show respect. On the tour bus, you have to be on good terms with the bus driver, so I will invite him to dinner,” Kemp said, giving an example of her modus operandi.

She mentioned that there have been times when she has been called to make tough decisions on the road that have seen her lean on her negotiation skills, while being firm and respectful.

“There have been particular instances, such as these gay conflicts and protests that sometimes threaten to shut down Capleton’s concerts. And we know what we stand for, so without compromising our position, I sometimes have to have a discussion with the protest organisers, and quite a few of them and I have become friends,” Kemp shared.

Although it was with Capleton that she took on the real musical journey, long before the Fireman, there was another Rastaman in Claudette Kemp’s life – Peter Tosh. She describes him as her brother, and their meeting, too, was nothing short of spectacular.

Kemp was in insurance at the time, and she decided to resign from the company she was working with, all because of what she perceived to be the unfair treatment of Tosh, who she didn’t even know personally.

“He had insured his vehicle with us and had met in an accident. The company made the payment on the claim, but then they refused to reinsure him. Peter had three things against him: he was black, he was a Rastaman, and he was an entertainer. I knew of other persons who had more accidents than him, and they were being reinsured. So, this crazy person that I am, I said this is discrimination, and I resigned,” she related.

When her bosses asked the reason for her resignation, and Kemp explained, they looked into the matter and sent Tosh a telegram saying that they had changed their mind and offered him reinsurance. Quite puzzled at their change of heart, Tosh went to the company and filled out all the paperwork. Before he left, one of the receptionists told him that he should go upstairs and thank Claudette Kemp, and explained what she had done.

“And, can you believe that him come up with attitude, and seh, ‘Who yuh?’ I told him to have a seat, and he eventually did. I explained to him that I believed in equal rights and justice, just like he did, and from that day on, I found another brother,” she said of the singer, who co-founded the iconic reggae group, The Wailers.

Kemp admits readily that she has enjoyed the journey, especially the charity aspect, which has seen Capleton and his team host the annual charity concert, A St Mary Mi Come From. “Capleton and I are very similar in that we love to give, and we are proud of what we have accomplished through the concert. And even though we didn’t have the show in 2020 because of the pandemic, we have been assisting many throughout the time with care packages because we know that people are having a rough time,” she said.