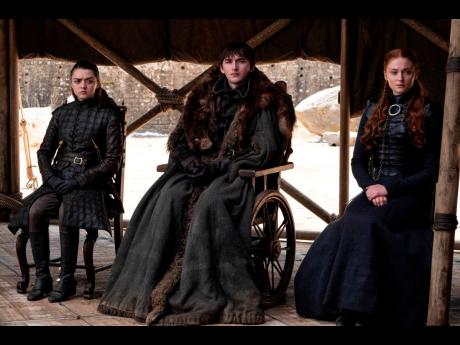 File
From left: Maisie Williams, Isaac Hempstead Wright and Sophie Turner in a scene from the final episode of ‘Game of Thrones’.

HBO is developing another three Game of Thrones spin-offs.

The network is currently working on a trio of prequels, which will all be set before the events depicted in the fantasy drama series – which ended in 2019 after eight seasons - and will tell the stories of characters who played vital roles in the history of the world explored by George R.R. Martin in his novels.

Two of the projects, which have the working titles, 10,000 Ships and Flea Bottom, are in the early stage of development and don’t yet have writers or showrunners attached.

More progress has been made on the third spin-off, 9 Voyages, which is being developed by Rome co-creator Bruno Heller and will focus on nautical adventurer Lord Corlys Velaryon, also known as ‘The Sea Snake’.

Lord Corlys will also appear in the previously-announced prequel House of the Dragon. He will be played by Steve Toussaint, though it is unclear if the actor will also star in 9 Voyages or if there is any crossover planned between the two projects.

House of the Dragon will also see Rhys Ifans play Ser Otto Hightower, the loyal hand of the king, while Eve Best has signed up for the role of Corlys’ wife, Princess Rhaenys Velaryon, a dragonrider dubbed ‘The Queen Who Never Was’ because she was passed over as heir to the throne because the realm favoured her male cousin, King Viserys Targaryen (Paddy Considine).

Sonoya Mizuno will portray slave Mysaria, who rises to become the most trusted and unexpected ally to Prince Daemon Targaryen (Matt Smith).

The 10-episode show – which is expected to launch in 2022 - will tell the story of House Targaryen and is set a few hundred years before the events depicted in Game of Thrones.

Fans of writer George R.R. Martin will be aware that Viserys ruled Westeros around 100 years after Aegon’s Conquest. His two children, Rhaenys and Aegon II, fought a civil war over the throne that was famously known as the Dance of Dragons.

House of the Dragon is based on the author’s companion book Fire & Blood, and HBO ordered it straight-to-series.

Game of Thrones regular Miguel Sapochnik is set to direct the pilot and additional episodes. He will act as showrunner alongside Ryan Condal, who created the upcoming show with Martin.