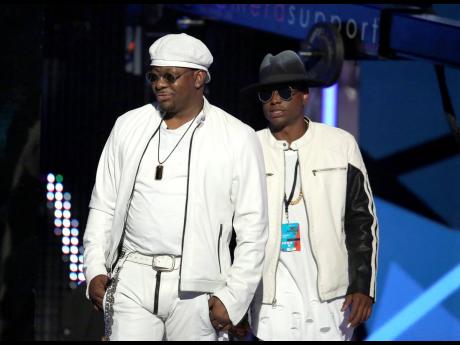 AP
An autopsy report says that Bobby Brown Jr (right), the son of Bobby Brown, died from the combined effects of alcohol, cocaine, and the opioid fentanyl. The 28-year-old was found dead in his Los Angeles home in November 2020.

Bobby Brown Jr, the son of singer Bobby Brown, died from the combined effects of alcohol, cocaine, and the opioid fentanyl, an autopsy report released on Monday said.

Brown Jr was found dead in his Los Angeles home at age 28 on November 18. At the time, authorities said only that they believed no foul play was involved.

Brown Jr’s girlfriend, who had last seen him alive that morning, found him unresponsive on his bedroom floor and called paramedics, who declared him dead, the report says.

He had a history of drug and alcohol use, and his death was ruled an accident, the report says.

Brown Jr’s mother was Kim Ward, with whom Brown had been in a long relationship.

The elder Brown sprang to fame with New Edition in the early 1980s and was one of the biggest solo stars in music during the late ‘80s and ‘90s.

In 2012, Bobby Brown’s ex-wife, Whitney Houston, was found dead after drowning in a Beverly Hills hotel room bathtub. Coroner’s officials said heart disease and cocaine were contributing factors. She was 48.

In 2015, their daughter, Bobbi Kristina Brown, was found face-down in a bathtub at her suburban Atlanta home. She was in a coma for six months before dying at age 22 of causes investigators couldn’t pinpoint. An autopsy showed that she had morphine, cocaine, alcohol, and prescription drugs in her body.

Her ex-partner, Nick Gordon, was found liable for her death in a lawsuit but was never criminally charged. Gordon died last year at age 30.