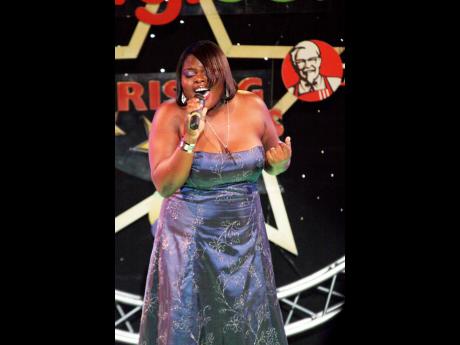 File
Tiffany Thompson performs during the 2008 Digicel Rising Stars competition. The accompanying vocalist and recording artiste reportedly died on Monday at the Port Antonio Hospital following a brief illness. She was 30 years old.

There has been a tremendous outpouring of love and support for the family of Rising Stars alum Tiffany Carolyn Thompson. The accompanying vocalist and recording artiste reportedly died on Monday at the Port Antonio Hospital following a brief illness. She was 30 years old.

Throughout her journey in the performance arts, Thompson had the reputation of being a dynamic singer with a contagious spirit. Her death has been a hard pill to swallow for members of the Digicel Rising Stars community.

“Cameal Davis called me to ask if I had heard, and I was in disbelief. Even when I started seeing the images being posted, it was hard to accept,” said Sharon Schroeter, producer of the televised series.

Thompson competed in the Digicel Rising Stars competition the same year Davis made history as the first woman to win. She placed seventh in the studio finals and was chosen as the Producer’s Pick.

Schroeter said: “I remember Tiffany when she entered in 2008. She was full of enthusiasm and had a big and amazing voice. Always bubbly, always smiling. She got along well with all the contestants, and even after getting voted off, she was still supporting all of them.” She continued, “Each time I saw her after, it was always, ‘Hi, Auntie Sharon’, and I can still hear her say it. The entire Rising Stars family is saddened by her loss.”

The Television Jamaica producer said Thompson should be remembered as an individual who was full of life.“Tiffany pursued one of her passions which was singing, and appeared to be someone who enjoyed life and was always celebrating, so we need to remember her in that light. Our condolences go out to her family and friends,” she said.

Her exposure in the music industry far exceeded the Digicel Rising Stars stages, as she represented The University of the West Indies (UWI) and Jamaica regionally at Carifesta Suriname in 2013, the Miss Heritage Pageant in St Vincent and the Grenadines in 2015, as well as internationally, performing in England for the Jamaica 50 celebrations in 2012 and again in 2014 at the Contacting the World Performing Arts Festival. She has also represented the island at the World Championships of the Performing Arts, sharing her passion for several genres, including reggae, dancehall, rock, R&B and soul music.

Recording artiste Diel, a former Digicel Rising Stars contestant who successfully secured a spot in the top three in 2018, said that his relationship with Thompson was strictly through the performing arts. Still, it was enough interaction for him to get to admire her greatly.

“I never knew Tiffany on a personal level, but we would always cross paths at shows. After a few times crossing paths, we got to speaking, and I realised she was a girl weh just cool. The last time was at the Phillip Sherlock Centre for The Creative Arts at UWI, where she is a favourite. And we challenged each other ... she said, ‘If I shell it down, it a guh be hard fi you’, and I responded, ‘Shell it down man, do yuh ting, because I can only try to top it’,” Diel shared.

The artiste said he removed a post he made in light of her passing because “I can’t believe she really dead … I don’t want to perpetuate false news, and this can’t be real.”

Born in Portland and raised in Windsor Castle, Port Antonio, Thompson journeyed to Kingston to pursue her tertiary education in geography and continued to share her passion for the arts with all those who came in contact with her. She was active in the Taylor Hall Carole, UWI Pop Society and a principal member of The Quilt Performing Arts Company. She would have turned 31 on July 17.