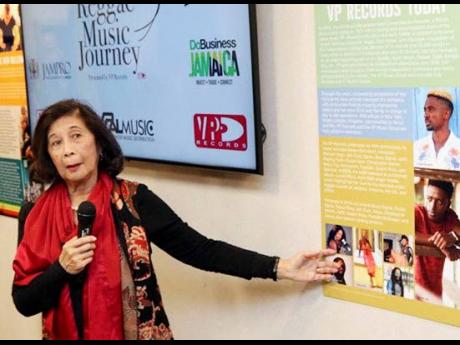 Jamaica’s Ambassador to the United States Audrey Marks has lauded the contribution of Patricia Chin and her late husband, Vincent ‘Randy’ Chin, to the development and promotion of Jamaica’s reggae music through their business, Randy’s Record Mart and VP Records.

Marks said any credible study of this important genre, which has remained a significant feature of Jamaica’s cultural heritage, will reveal Mrs Chin’s remarkable contribution to its growth in Jamaica and across the globe.

“From their humble beginnings as Randy’s Record Mart in 1958, the Chins were instrumental in introducing and giving prominence to many new reggae stars. Their relocation to the United States in the 1970s, where they established a reggae empire known as VP Records, constituted a groundbreaking move, given their singular role in introducing several artistes to the international scene and building a new wave of reggae legends, including Beenie Man, Bounty Killer, Lady Saw, and Sean Paul,” she said.

Marks was speaking at a reception to celebrate the launch of the recently released book Miss Pat – My Musical Journey, hosted by Carib News publishers out of New York.

The proceeds from the book will go towards supporting music education as well as the Alpha Institute in Jamaica to enhance the facilities and upgrade the school’s musical technology equipment. This will be channelled through the Vincent and Pat Chin Foundation, which supports music education in the Jamaican diaspora and the Caribbean and seeks to “preserve the history of reggae and Caribbean music”.

“I am always inspired by the remarkable contribution of members of the Jamaican diaspora to the economic, social, cultural, and political landscape of the United States. Miss Pat’s life stands out as an immigrant success story, blazing a trail of excellence in entrepreneurship, which has inspired many other Jamaicans to pursue similar dreams in their adopted homeland,” Marks noted.

The Jamaican envoy pointed out that Miss Pat’s journey served as an inspiration to women not just in Jamaica and the USA, but also across the globe.