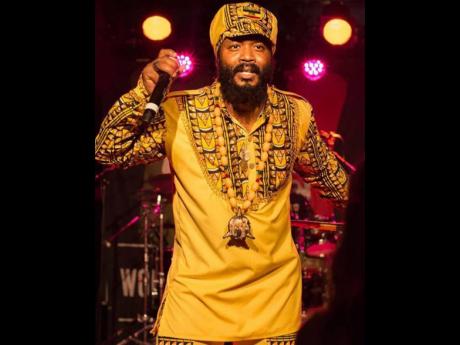 Dubbing Africa as the continent that has his heart, veteran reggae singer Warrior King is looking to strengthen his presence in the place of his ancestral roots with a new collaboration. The track, Africa Love, chronicles the singer’s unwavering affection for the motherland and features West African superstar, MzVee.

“Africa is where my heart is and this collaboration will help to make my presence more felt there. It is an Afrobeats single and we all know the genre is like an offspring of reggae and reggae has its roots in the same African culture. Both genres are all about the message and for me, that’s what’s important at the end of the day,” Warrior King told The Gleaner.

“Working with feminine energy is always great and I am feeling elated about this collaboration with MzVee. I have high hopes for the song but I especially want it to resonate with African people, wherever they are around the world. I also want it to connect deeply with the youth so they grow a deeper sense of appreciation for their ancestral roots. It’s a beautiful love song, but also an empowerment song,” he said.

Africa Love was created by popular producer Jermaine ‘Crawba Genius’ Henry. It is a collaborative effort between Warrior King’s Rootz Warrior Productions and Crawba Productions. According to Henry, the single was infused with a Latin undertone and has been deemed a contemporary take on Warrior King’s authentic reggae sound. The track is expected to be officially released this Friday and samples the late Garnett Silk’s 90s hit single, Hello Mama Africa.

In a statement sent to The Gleaner, Henry said, “I am fascinated with Garnett Silk’s sound and I really love Afrobeats, so I wanted to find a way to get the two things that I love to work in synergy on one track. With the Garnett Silk idea in my head, I got creative. I wanted to do something with an authentic kind of vibe but something [for people] to dance,” he said. “When me give King the rhythm him say ‘da rhythm here a murder’ and was excited to work on the single. I know Africa Love can be a cross-over track for Warrior King.”

Still elaborating on how he put the song together, the producer explained that during the creative process he knew a female voice would be needed. He said he had been listening to MzVee for some time and loved what she brought to the table. “I heard a female on the track and I wanted to keep it friendly for his audience as well. I’ve been listening to MzVee for a while now and I love her vocals and her appearance. So, I saw that MzVee was perfect for the song and for Warrior,” said Henry.

MzVee, who is on the heels of a video release for You Alone from her critically-acclaimed fourth studio album InVEEncible, said the track is a beautiful celebration of African love. She said she was happy to be a part of the project and was even more elated to have worked with Warrior King.

“This song celebrates African love and he [Warrior King] has always praised the African woman. He talks about how beautiful, how strong and how courageous she is; and that’s exactly who an African woman is. He is just a super good musician and I loved his flow on this song. Working with him was super, super, super dope,” she said.