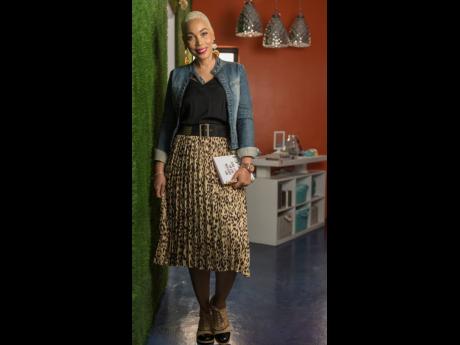 Gladstone Taylor
Artiste manager and marketer, Tara Playfair-Scott, is bringing influencers and brands together with ‘The Social House’.

Artiste manager and marketer, Tara Playfair-Scott, said the COVID-19 pandemic and resulting lockdowns have given rise to several young, hot influencers who in the past year have managed to manoeuvre the various platforms in ways that have led to instant popularity.

As their fan bases grew, so did the number of corporate brands reaching out, hoping to tap into their creativity to develop innovative campaigns to boost sales and profits. Having watched those partnership blossom, the public relations specialist had the idea of bringing the two worlds that much closer. Right there and then, The Social House was born.

In an interview with The Gleaner, Playfair-Scott described The Social House as a space where sponsors from corporate Jamaica are allowed to showcase their brands in a new, entertaining and engaging way by tapping into the creative capacities of six of the country’s hottest social influencers, all under one roof. The show will be aired weekly and bring something different to the social media space.

“What prompted me to do this was that over the past year, while we’ve been in the pandemic, I saw a lot of brands turning to influencers because their platforms were experiencing exponential growth. But I also noticed that although they reached out to these influencers to zone in on their creativity to come up with something unique for their brand, it was always being done in the same manner,” she said.

Hoping to change that, Playfair-Scott is looking to help create more out of the box content. “They weren’t allowing these influencers to be as creative as they could. It was almost like a paradox, and I thought, if you’re going to go to someone because they are using their creativity to come up with content that is unique and immersive, energetic, fun and catchy, it shouldn’t all look and feel the same. When I saw that was what was happening, I said to myself, ‘I need to have somewhere that allows these creatives to be themselves and do it in the form of challenges’,” she said.

The Social House will allow influencers to develop their ideas before pitching to brands. “I wanted to get these brands in on it, let them see all the different ideas that come from these minds minus the mundane. I just really wanted these influencers to have a space where they were able to tap into their creativity without having the restrictions or confines of guidelines from these brands. When you strip those away and allow these individuals to do what they do best, we pitch it to these brands, and they can choose what they want to represent their companies. That way, the campaigns they end up releasing will be nothing like they’ve ever signed off on before,” she said.

Pointing out that the show will take the format of a reality TV show, Playfair-Scott said she is not the least bit worried about the interest The Social House will generate. She is adamant that the influencers that have signed on as participants are enough to create a buzz around the new show.

“ The Social House is gonna attract people on a number of levels. One, it’s gonna be your favourite social media personalities in one house, and that can only mean all sorts of craziness and excitement. They will literally live and work together, and you will be getting the exclusive look into what that looks like,” she revealed.

“Two, you’re going to see what it really takes to put their content out there. A lot of the times, we see the finished product on social media, but we don’t see the kind of work that goes into the videos and vlogs. Now, you will get that opportunity. Viewers will now get a greater understanding of the social media scene, the evolution of it and will therefore gain a greater sense of appreciation for the persons who have managed to use the space to create careers for themselves.”

Filming for the show will start in the coming week. Aware that her team will be executing a show at a time when COVID-19 numbers are still on the rise, Playfair-Scott assured the public that the health and safety of the show’s cast and crew are a top priority. “Safety is very important to us. Making sure that the health of the content creators and anyone they come in contact with is a very imperative part of our production team’s concerns. That is why one of our key partners on this project is MD Link. They are an online medical service where you are able to log on, state what your symptoms are and speak to a physician that specialises in that area. So should anyone not be feeling well in the house, they are able to get on quickly with a doctor, and if the doctor feels like their symptoms need a physical visit, they are able to do that too,” she said.

There will also be regular COVID testing. “They (MD Link) offer COVID testing, both antigen and PCR, and everyone in the house will be tested before they enter, and everyone will continue to be tested regularly throughout the six weeks of filming. Anybody entering the house for any reason that is outside of our bubble also has to be tested within 24 hours before entering the space,” she said.

Playfair-Scott said she and her team are serious about making the show a hit. Although the show will be in its incubator stages, the marketer said she believes it can reach international audiences. The latter, she said, is something she had at the forefront of her mind while putting the show’s puzzle pieces together. “I want this show to expose these social media content creators and influencers to new markets. I do not want them to just be limited to our shores. A big part of the reason I am doing The Social House is to allow them to be seen beyond our borders. With this project, we can easily share with people worldwide so that other brands, other companies, and other sponsors get to see them. They could end up getting additional work from this in the long run,” she said.

Talent is not the only thing that will be on display. “ The Social House will not only showcase the talent of the influencers involved but the entire island in terms of location and the wide array of human resources we possess. I mean, we will have a cross-country challenge that will take them across Jamaica, so we will be exploring our island (in a safe way and within curfew hours) and showcasing it to the world. All in all, it’s going to be a great initiative, and I am very excited to see where it goes because there is nothing like seeing an idea come to life,” said Playfair-Scott.