Keri Hilson is basking in her 'manifestation season' 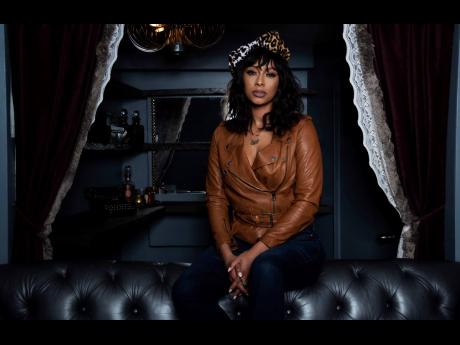 Keri Hilson is projected to have a busy year, but it does not include releasing new music. The two-time Grammy nominee is preparing for the release of several film projects, and if that surprises you, you are not alone.

"It took even me by surprise," said the singer-turned-actor. "I always dreamt of leading a film — never thought that I ever actually would or even feel capable of doing so."

Hilson stars in the upcoming TV movie Lust: A Seven Deadly Sins Story premiering today on Lifetime. It is part of a two-film partnership between the network and mega pastor and entrepreneur T. D. Jakes. The collaboration also falls within Lifetime's 'Broader Focus' initiative dedicated to hiring female directors, writers and producers.

"I love throwing myself in situations where I'm forced to grow and learn and catch up and be challenged," said Hilson of her rapidly budding film career. "I'm really loving this shift that just occurred so naturally."

Labelling this her "manifestation season", the Pretty Girl Rock singer starred in TV One's Don't Waste Your Pretty in February, and the actress will also appear in a short film later this year. She's expected to be in a full-length theatrical release, too, although there have been no public announcements.

Making a giant musical splash in the late 2000s, the songstress released hits like Turnin Me On featuring Lil Wayne, her empowerment anthem Pretty Girl Rock, and Knock You Down, a smash featuring Kanye West and Ne-Yo. Prior to solo success, she started as an in-demand writer whose credits include songs for Chris Brown, Mary J. Blige, The Pussycat Dolls, Jennifer Lopez, Timbaland, R. Kelly and Britney Spears.

Hilson, who collaborated on several songs on Spears' Blackout album, has not seen the Framing Britney Spears documentary and says she is not familiar with any of the polarising allegations, but does remember getting a sample of the pop star's life.

"I knew her to be just a genuine young woman who was in [a] very unfortunate type of surveillance at the time when we worked. It was ridiculous. People cut the bushes out of the studio — like, they cut holes in the bushes where we worked for weeks," recalled Hilson of the paparazzi. "That would literally affect anyone to be under that kind of scrutiny."

While adamant she is not taking sides, Hilson said her own family has had the difficult experience of making decisions for a relative unfit to make choices for themselves. So she has thought of Britney often.

"I'm obviously going to support her," said Hilson. "I've actually prayed and meditated for her."

Hilson is no stranger to the pressures of the music industry herself. Her reputation took a massive hit at the height of her career when an unreleased remix of her 2009 single Turnin Me On was leaked. In the record, Hilson threw subliminal jabs at unnamed female R&B artistes, causing fans to speculate at least one was Beyoncé. Denying it at the time, she admitted last year on Out Loud with Claudia Jordan that Queen B was the target.

But there was more to the story: The songstress, young at the time, said she did not write the lyrics and was actually forced to record them under the threat of career-threatening retaliation from parties within her camp — a move she regrets.

Hilson, who has not released an official album since 2010, has kept a relatively low profile throughout the last decade as she has nourished her mental health, publicly acknowledging her bouts with depression. But she has cautiously emerged from her self-imposed cocoon, and even prepared to drop new music last year before the sudden loss of her father halted her plans.

Despite her hiatus, the hitmaker still receives calls from musicians requesting her magical pen. She is always creating and has "a lot of work in the arsenal". But her priority now is acting.

"I have to be in an authentic space to pursue anything. It's got to be genuine for me," said Hilson. "For now, all of my focus is in learning a new craft."

More wise and confident now than the young, bright-eyed songwriter just happy to pursue her dreams, Hilson says she is in control of the direction of her life, and much like her music, she is the one penning the lyrics.

"Don't allow others to impose their beliefs, their methods upon you," said Hilson. "That's the way I approach so much in life. Not just music, not just career, it's like anything — I'm going to fight to make sure that my voice is heard … it's always worth the fight. It always has been, and I believe it always will be."