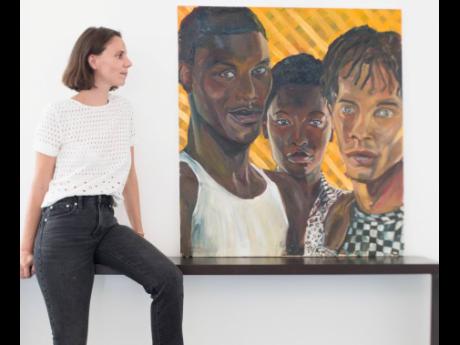 Contributed
French artist Marguerite Wibaux next to her oil on canvas painting ‘One Love’ for which she recruited Saint International models (pictured from left) Val Haughton, Sabrina Nugent and Kristoff Taylor.

The love affair with Jamaica was instantaneous for Marguerite Wibaux during her recent weeklong artist-in-residence stay in St Andrew. From forging connections with island-raised creative peers in the capital city, to discovering the intrinsic charm of Portland’s natural attractions, the French artist’s working vacation left her enamoured with The Rock.

Speaking with The Gleaner having returned to her home base in New York, she revealed that a particular highlight of her trip was a collaborative project she initiated, seeking out SAINT International CEO Dewight Peters once she had settled in at the French Embassy, and in turn, recruited three of Peters’ models to immortalise with her brush strokes.

“Upon my arrival, I was immediately introduced to Deiwght to find models to portray in a painting. I was not looking for just pretty faces, but real characters; people that have something special that make their beauty singular and I knew SAINT could help me in that quest,” the artist explained.

Over a three-day course, the models patiently sat for long-hour stretches individually, and in pairs, as Wibaux finessed the finer details of marrying their facial and body structure with light composition.

“It was a really fun and enriching experience,” she told The Gleaner of her cultural exchange with the models that resulted in the final oil-on-canvas painting she lovingly titled One Love, a nod to reggae icon Bob Marley’s classic song of the same name that was also part of her makeshift art studio soundtrack of tunes.

“I had the opportunity to share some quality time one-on-one with Kristoff, Val and Sabrina, and getting to understand better what it means to be in your teens and twenties in Jamaica today. When it was two or three of them together we created different group dynamics. Whether it was light-hearted fun, or listening to good music, to profound conversations about cultural differences between France, Jamaica and the United States, I enjoyed their company,” she said.

Hero of the story

Of the finished work with the SAINT trio, the intuitive artist explained the message she sought to convey. “Men and women relationships are very complex here in Jamaica I feel, and women have to be extra strong. In my painting, even though men are on the foreground and block the way to Sabrina, she is the hero of the story,” Wibaux noted.

A graduate of the prestigious HEC business school in Paris, Wibaux readily admitted to having “quite the paradoxical career” that eventually led to her current full-time occupation as an artist. “I was immersed into fine art from an early age as my mother was an artist and my grandmother, an art historian,” she pointed out. “But I first graduated with a Master’s in Business and worked in advertising for many years. It was only when I arrived in the United States that I decided to turn a lifelong passion into a career. I did not go to any art school, but I have learned from practice and from looking at the great masters,” she divulged.

The Frenchwoman’s baptism in Jamaican art was awash with a series of memorable encounters. “During my stay, I was lucky enough to meet various people from the local art scene, artists, curators, art dealers and I was impressed. I met Philipp Thomas and Greg Bailey and I simply love their work! I also discovered about Xayvier Haughton, one of his art piece is still haunting me, his work is very powerful,” she revealed.

Wibaux is currently showcasing selected portraiture in a show called Together at The Yard gallery in New York that runs until April 17. Her work has also been featured in exhibitions in Milan and Paris.