‘My dad can still send me go shop,’ Big Youth’s lawyer son hails him on his birthday 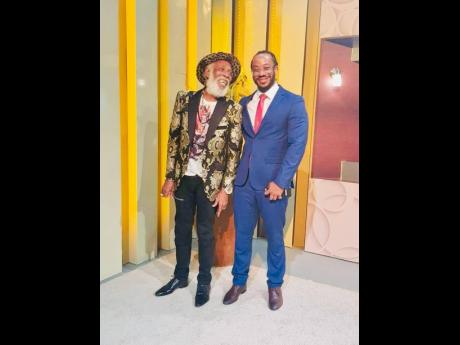 The name Isat Buchanan is getting more and more attention within and outside of legal circles, as the young attorney takes huge strides up the professional ladder.

The son of music legend Big Youth, Buchanan was formally called to the bar in 2017, and has a story that is as captivating as that of any of his clients. He was recently hired by civil-rights group Stand Up for Jamaica to represent a man who had languished in prison for 50 years, and he is also representing jailed entertainer Vybz Kartel, who is appealing his murder conviction before the Privy Council.

As Big Youth, real name Manley Buchanan, turns 72 today, Isat took time to pay tribute to his beloved father, who he hails as his “biggest supporter and role model” and who has been a great inspiration.

During a telephone interview, he told The Gleaner, “My father, Big Youth, is a true friend. My biggest supporter and the role model of my life [who] has taught me never to give up, no matter what you are going through. He has always said, ‘Don’t ever let anybody hold you down.’ I continue to thank God to have blessed me with such a great father.”

Isat’s journey in life has seen him triumph over two convictions for which he maintains his innocence, and rather than wallow in self-pity or feelings of revenge, he has overcome obstacles to become a man of whom his father is immensely proud. Big Youth is only too happy to share, “My son, Isat, is a lawyer,” beaming with his trademark ear-to-ear smile and distinctive twinkle in his eyes.

But, lawyer or not, Isat is intent on keeping it real, and giving respect where respect is due is high on his agenda.

“Despite his achievements, he is my dad. Despite my achievements, I am his son, and him can still send me go a shop,” the attorney-at-law stated with a huge measure of humility. For him, no words were too glowing to describe his father.

“The Honourable Big Youth is an angel on earth, and I am grateful to be a part of his family. I continue to thank God for continued health and strength for him and myself and my family. The greatest gift from God is life, and that gift is measured by time. Blessings to you, Manley Buchanan, on your birthday, and beyond,” was his message to his father.