Songstress Courtni will not ‘Sekkle’ for less 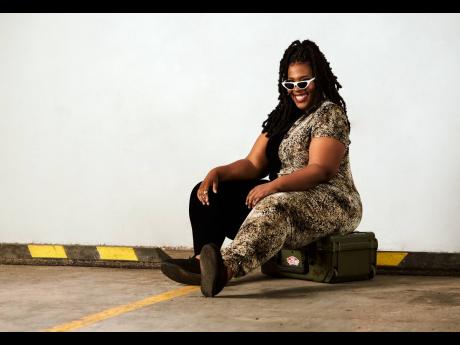 “She is that girl who’s on a journey right now, figuring herself – and other things – out,” says singer-songwriter Courtni in an interview with The Gleaner. Working as a background vocalist for reggae and dancehall entertainers like Ras I, Royal Blu, Runkus, Jaz Elise, Roots Percussionist and Joby Jay, briefly, has helped her to become more comfortable in her skin and on stage, and she is showing that she is coming into her own with her latest single, Sekkle.

“This is something I have been preparing for from I recognised my talent for singing; I definitely knew I didn’t want to do anything else,” she said.

Courtni added, “It also amplified my love for harmony; I truly enjoy adding that beautiful sound of vocals coming together and just the wisdom from each of these artistes, things that Ras I, Runkus and Royal Blu have shared with me are invaluable. They’ve been like my big brothers, and when I said I was going to do this, they said, ‘Go birdie, fly’.”

In March 2020, the singer collaborated with her friend Jean-Andre Lowell Lawrence, better known as JLL, on her single, My Type. Thinking about the next step forward and new music, the two linked up again to create Sekkle. Since its release, the single has captured the attention of several other artistes and key industry players, like reggae singer Protoje and dancehall artiste Devin Di Dakta, who added the track to their respective Spotify playlists, ‘Reggae: Fresh and Clean’ and ‘Dancehall You Should Know’.

The songstress has a big personality and shows this off along with her dancing skills in the music video for Sekkle.

“The person I am in life, I owe it all to teenage me. I am doing this for her because she was nowhere close to this – not confident in the slightest bit – she always wanted to be hidden. This is to show teenage me, ‘Hey girl, look how good you look, you are a beautiful girl in whatever form. The confidence I have gained, I want to show it off, every time I get,” she shared.

Courtni is not signed to any labels presently, but is putting it out into the universe; “me nah sekkle fi less”.

“It took a while for me to accept my body and look in the mirror and be pleased with what I am seeing. Now that I have, if it is [that] I sign to a record label and they mention wanting me to lose some weight … sure, I’d be open to it, but I know it couldn’t work if they wanted me to shed a drastic amount of pounds where I am not plus-size after,” she said.

The daughter of veteran performers Karen Smith and Jackie Jackson has followed in her parents’ footsteps, but in doing so, she is making her own trail.

For most creatives in the music industry, born into musical families, she said, “it’s a two-headed coin situation”.

Courtni explained, “Most times, it depends what their parents (or families) want for them, and truth is some parents don’t want that for their children. When my parents realised I could sing, they were happy because who doesn’t want a musical child? However, they were quite apprehensive and, in a way, they wanted to shelter me.”

She believes her parents wanted her to prove how badly she wanted a music career and that at times, “it felt hard rather than easy”.

There were situations where she was automatically put into a box because persons expected her to sound like her mother or bring the same methods as her father to appeal to a similar audience as them, she said.

“I am from a totally different generation, and I am different as an individual. But I am grateful for them allowing me to pay my own path in a field where they are familiar with the hills and the ditches. I can confidently say I have proven myself … when it comes to music, I am very serious about my career, and I have been preparing for it, physically with my voice and mentally that obstacles would come my way because this is not a perfect world.”

Thankfully for Courtni, there has not been a lot of obstacles she expressed. She is not reluctant to admit that she was fearful of how people would receive a plus-size woman singing and dancing, but takes comfort in knowing people also love confidence and empowerment, which is what she represents.