‘A tragic loss for journalism’ 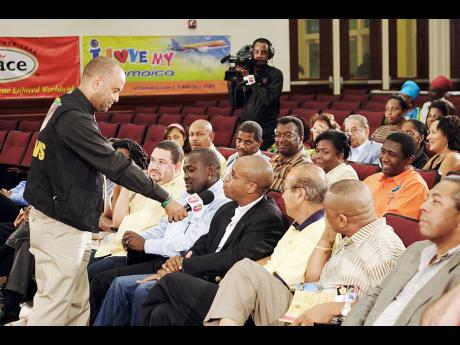 Contributed
Michael Sharpe (left), the host of Television Jamaica’s current affairs programme, ‘Your Issues Live’, speaks with Marlon Hill, a member of the Jamaican Diaspora in the United States, during a taping of the programme. 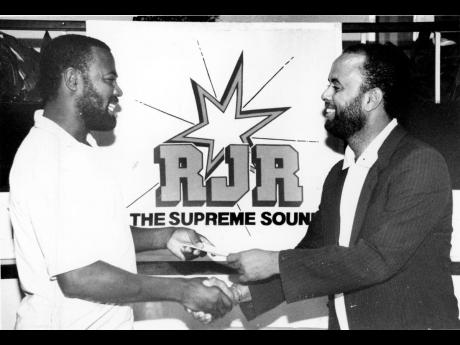 File
Roxcosmo Thomas (left), emerged as the winner in the ‘Sharp Talk Election Quiz’, which was conducted on Radio Jamaica (RJR). Here, Roxcosmo accepts his cheque for $5,000 from Michael Sharpe, host of ‘Sharp Talk’, for correctly predicting which party would win and by what number of seats in Jamaica’s 1983 general election. 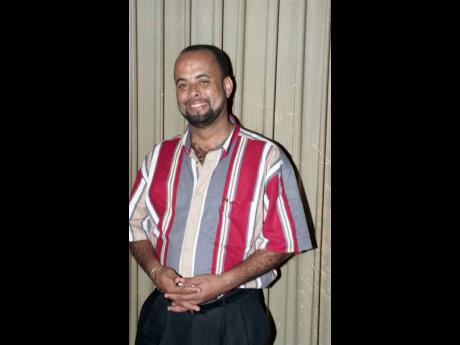 The passing of prominent journalist, editor, lecturer, communications specialist and former Television Jamaica news anchor Michael Sharpe early Tuesday morning has had an impact on people from every sector, including entertainment. Sharpe, who was a staple in many homes as the 7 o’clock television news anchor, touched many lives, whether he was known to them personally or not.

For music analyst Clyde McKenzie, Sharpe’s passing has left a void that will not be easy to fill. “I’ve known him for 30-odd years, when we were both at JBC. He was a pretty friendly guy, and he would take the younger journalists out and introduce them to the people who they should know. He was always that mentor. Over the years, we weren’t so much in each other’s space, but we would exchange pleasantries from time to time. He was someone who loved music and was very knowledgeable about it,” McKenzie reminisced.

He also recalled that Sharpe, a 40-year veteran in broadcasting, actually at the helm of a music programme on radio at one stage. “Michael had a jazz programme in the late 1990s, and he was very good at it,” the analyst stated.

He added, “I was shocked when I heard that he was in hospital because I didn’t know that he was ailing. But I was hoping that he would be back with us shortly. Michael had quite a bit to offer. He’s the kind of journalist that you don’t get every day. His passing is a huge loss to media.”

Entertainment manager and events décor specialist Bridgette Anderson had to hold back the tears. “I have known Michael forever. He and I were members of the same youth group when we attended the St Andrew Parish Church. From my teenage years, I remember Michael being a wonderful soul,” Anderson reminisced.

“It kinda pull me up this morning when me hear, not lying; even now, I feel like crying. Michael was a journalist par excellence and a consummate professional. Over the years, we would see each other occasionally, and it was always pleasant. I hope his soul rests in peace,” Anderson, who manages reggae singer Samory I, said.

“I thoroughly enjoyed his one-on-one interview with Joel Andem at the time. Andem came off as quite intelligent and largely held his own with Sharpe. I thought it was [a] bold move and a ratings winner for TVJ’s Exposure programme at the time, given that Andem was a major figure in the criminal underworld. Michael Sharpe had a certain charm and sangfroid about him, a kind of icy steel under pressure, even when he was dealing with mercurial characters and prickly personalities,” Mills said.

“Michael Sharpe is a top-class journalist whose presence will be sorely missed in journalism,” he concluded.

New York-based entertainment writer Anthony Turner said Michael Sharpe was the journalist who kept the diaspora informed on happenings in Jamaica. “Michael Shape’s sudden death is a tragic loss for journalism. Instantly recognisable for his distinctive voice, for almost four decades, he kept us here in the diaspora informed of happenings on the ground in Jamaica, whether it was politics or current affairs. He was admired for asking probing questions. He and co-anchor Dorraine Samuels were outstanding journalists and members of the dynamic dream team on Television Jamaica’s (TVJ) Prime Time News. RIP Michael,” Turned said.

Prime Minister Andrew Holness lauded the award-winning journalist for “[dedicating] himself to the craft of journalism and keeping Jamaica informed”, and noted that “Michael was fearless and sharp in his coverage and commentary”.

Michael Sharpe’s bio states that he worked briefly at The Gleaner and the Jamaica Information Service upon his return from journalism studies in New York. He distinguished himself while covering the Grenada Invasion in 1983 and joined the staff of Radio Jamaica later that same year. He won recognition for his coverage of the one-party parliament in the 1980s, and started the morning feature, Inside Gordon House.

He served as deputy news editor for RJR News in the 1990s and also hosted a night-time talk show, Sharp Talk, which served as an outreach vehicle for many disadvantaged persons who brought their needs and concerns to him. When JBC Television was renamed Television Jamaica (TVJ), Michael Sharpe became the face of evening news when, for more than a decade, he co-anchored Prime Time News on TVJ with Dorraine Samuels.

At the time of his passing, Michael Sharpe was news operations manager at Jamaica News Network, part of the RJRGLEANER Communications Group.