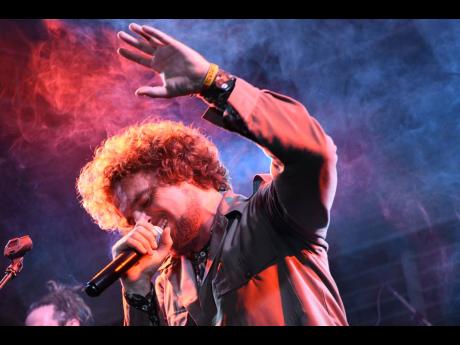 File
French singer and songwriter David Cairol is using reggae music to build bridges of hope and unity from France to Jamaica.

Frenchman David Cairol is no construction worker, but he knows a lot about building bridges. He started listening to reggae music at the age of 14 – nearly three decades ago – and he has been using the message therein to build bridges of hope and unity from France to Jamaica, and across the globe.

One month ago, the singer and songwriter released the single, Building Bridges, which saw him collaborating with Brinsley Forde, reggae legend and founder of British reggae group Aswad, and Var from Inna De Yard. “I met Inna De Yard three years ago in Jamaica and then opened for them in France, and then came and saw them in Kingston ... . The song has over 150,000 views on YouTube, and it is playing in over 40 countries. From Jamaica to France, we are building bridges and creating a positive message, and it is working,” Cairol told The Gleaner.

Among the musicians on the project are Courtney ‘Bam’ Diedrick, Donald ‘Danny Bassie’ Dennis, Hector ‘Roots Percussionist’ Lewis, Philipp ‘Winta’ James and the late Winston ‘Bopee’ Bowen, all of whom have worked with A-list artistes such as Bunny Wailer, Ziggy Marley, Luciano, Inna de Yard, Damian Marley, Chronnix, Protoje and Mortimer. It was produced by Matthieu Bost. Delroy ‘Phatta’ Pottinger recorded Building Bridges at Anchor Studio in Kingston, and Cairol shared that it is one of the songs from an upcoming album titled Verse.

Cairol, who is from Basque Country in southwest France, says his foray into reggae music was actually accidental, but he is now convinced that it was fateful. “I had loaned a friend a Lenny Kravitz tape and needed it back. However, he mixed it up and returned the wrong thing – a tape of Bob Marley’s Legend. Listening to reggae music and Bob Marley gave me real meaning and changed my life,” he explained.

His first visit to Jamaica was in November 2017, and he returned in 2019 to record his album and promote a song called Hope Road. “That is a tribute to Bob Marley’s journey from Trench Town to the road of Hope,” he said, referencing the name of the road which was home to Marley and which now houses the Bob Marley Museum. “Hope is the major message in reggae music,” said Cairol.

With this year being the 40th anniversary of Bob Marley’s death, the French artiste says he is forced to focus on that milestone. “I’m used to celebrating Bob Marley’s life. Normally, I don’t think about the day he died. The thing I would have loved to see is for Bob Marley to perform live in front of me. He has a lot of spiritual sons and daughters, and I am one of them,” he said proudly.

While recording his first album in Jamaica, Cairol had the pleasure of meeting Judy Mowatt of the legendary I-Three, Marley’s backing vocalist, and she introduced him to another project, which saw him paying musical tribute to Marley.

He has also paid homage to Marley in a few pages of a book, released on Thursday, April 29. “I wrote 10 pages in a new book by a famous French journalist, Alain Gardinier. I tell how Bob Marley has influenced me. The title of the book is translated [as] Bob Marley and the Legend of Reggae,” Cairol said.

Quite earnest about giving back to a culture that has been kind to him, Cairol, from his very first visit to Jamaica, made a link with the Alliance Française de la Jamaïque and introduced a programme that would see students in Jamaica and France working together to make music. He explained that two schools choose one theme together, write a song, compose the melody, and interpret the title. French students write their parts in English, and the Jamaican students write in French. The first year, he worked with St George’s College and, more recently with, Campion College in Jamaica, and Lucie Aubrac College in Linxe, France.

“I was happy to do that because reggae music has given me so much. The students loved it, and it also created a buzz,” Cairol said.

A huge supporter of Jamaica’s annual Reggae Month celebrations in February, Cairol said that performing at the Dennis Brown tribute concert in 2020 was one of his proudest moments.