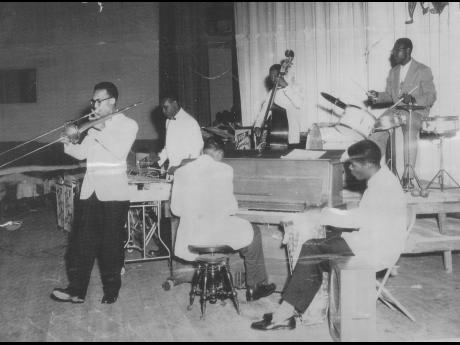 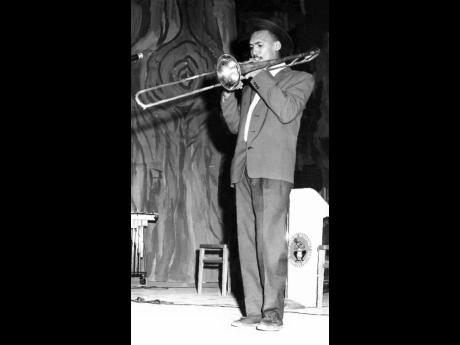 Gleaner Photo
Trombonist and composer, Don Drummond, who died at the Bellevue hospital on May 6, 1969. He was 37.
1
2

Jamaican music is as rich in originality and brilliance as it is in fascinating stories, some less happy than others, but no less blockbuster-worthy. One such is the life and times of renowned and revered trombonist and composer, Don Drummond, who died at the Bellevue hospital on May 6, 1969. He was 37.

Drummond was a musical genius whose career was cut short by a murder and who was plagued with mental health issues. According to one of his biographies, on January 2, 1965, Drummond’s live-in lover, a dancer by the name of Anita ‘Marguerita’ Mahfood, was found dead. She had four stab wounds to the chest. Reports are that Drummond told the police that Mahfood had stabbed herself, but, in 1966, he was found guilty of her murder.

In another twist, the jazz musician who was also a member of pioneering ska group, The Skatalites, was ruled criminally insane and imprisoned at the Bellevue asylum in Kingston, where he remained until his death. The official cause of death was “natural causes”, but other theories were reportedly put forward.

In 2013, the National Dance Theatre Company (NDTC) brought this intriguing reality show/soap opera drama to life, with a masterpiece choreographed by Clive Thompson. Among the cast were principal dancers Marlon Simms, who alternated with Kevin Moore in the role of Don Drummond, and Kerry-Ann Henry and Tamara Noel as Marguerita.

Simms, who is now the company’s artistic director, recalls the memorable journey to ‘Malungu’, as the ballet was called.

“Mr Thompson’s enthusiasm was infectious, and we all caught it. The story of Don Drummond is a passionate, love story that was in some ways toxic. I knew of Don Drummond and his excellent music, but I didn’t know about that aspect of his life,” Simms told The Gleaner.

He said that ‘Malungu’ – which was Marguerita’s name for her lover – was an easy sell, and that Thompson gave them his research material to read in order to be well prepared to execute the piece.

“Don Drummond was a man who latched on to music as if he were born with a trombone in his mouth. He was listed among the greatest trombonists of his time. We wanted to tell the story of this great Jamaican – and you know how Jamaicans love to hear how great we are,” he chuckled.

“The drama had all the right ingredients: a beautiful love story, both being artistes, they were captivating in their own right; Drummond’s journey to Rastafari, and the tragic end. Mr Thompson crafted the story beautifully, and it worked,” the company’s artistic director stated.

Thompson, for whom ‘Malungu’ is his last work, so far, found it quite coincidental that he was being called to reminisce. “Just this morning at about 4 o’clock, I was going through my notes on ‘Malungu’ – and the file is rather big – thinking about revisiting this ballet,” he said.

“In 2013, I was scheduled to do a new work, and I wanted to do a Jamaican piece, but I didn’t want to do a folk piece. I was reading up about Don Drummond and realised that his story would be perfect. I interviewed so many people, including P.J. Patterson, people at Alpha Institute – I also did research on his music – and I put the script together. When I do a narrative work, I always write a script,” Thompson said by way of explanation.

Vividly, the master choreographer detailed aspects of the work, scene by passionate scene. Both Thompson and Simms noted that it was a particular bedroom scene that played out that was indelibly imprinted in the minds of theatregoers.

“We brought a huge king-sized bed on stage. I don’t remember if it had a mattress, but that bed became the prison. We see them at church because both Don and Marguerita became very involved with spirituality up in Mountain View hills, and in the ballet, the musicians become a part of the service. We see him always looking for her, and at one point, he is all alone. Then he is in the bedroom, and she comes in after a while and does a mini striptease, and he just grabs her, and it is during that heavy duet in that passion that she loses her life. There is no stabbing or anything, but she is dead, and he runs out. In the next scene, there is the lament, and then the bed frame is placed in an upright position, and it becomes his prison. When he dies, the nuns come in with sheets, and when they leave, the only thing that is left on the stage is his trombone,” Thompson related without even a pause.

When the NDTC opened its 51st season at The Little Theatre in St Andrew, in July of 2013, ‘Malungu’, described as “a romantic tragedy about illustrious Jamaican musician, Don Drummond of Skatalites fame, choreographed by celebrated choreographer Clive Thompson”, was one of five new works to make its début.