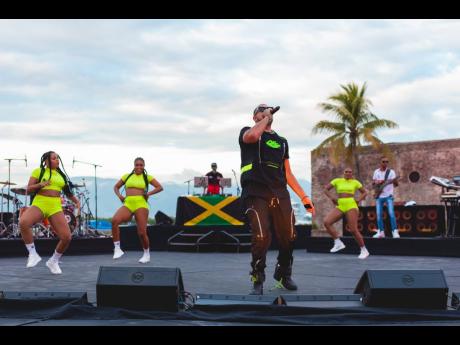 Contributed
Sean Paul showcased the best of dancehall on Saturday during a virtual performance streamed live from Morgan’s Harbour in Port Royal. 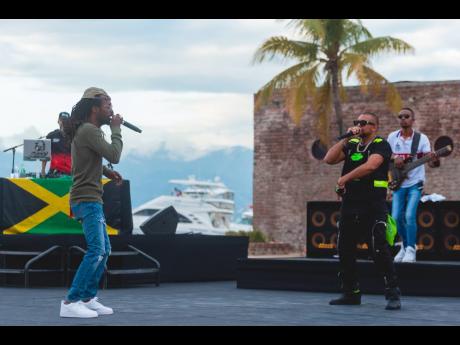 After being away from the stage for well over a year, internationally renowned, Grammy-winning artiste, Sean Paul, returned to his stellar performing ways on Saturday. Dubbed ‘Sean Paul: Live from Jamaica’, the virtual concert was streamed live from Morgan’s Harbour in Port Royal. Backed by his full band and a unit of dancers, the entertainer delivered a world-class event which saw him performing a slew of songs from his critically acclaimed album, Live N Living, as well as some of the classic bangers for which the iconic dancehall artiste has become known.

On a stage that overlooked Kingston’s capital, Sean Paul showcased the best of the dancehall genre, serving up one solid hit after the other. Armed with one of the most versatile catalogues from a Jamaican entertainer, the We Be Burnin’ deejay needed only to stand there and let his music speak for itself. Still, being the consummate professional he is, the incomparable SP moved about the stage, interacting with his dancers to give a performance the online world would have no doubt been proud of. His set list included timeless scorchers such as Get Busy, Like Glue, I’m Still In Love With You and, of course, Gimme Di Light. He then went on to serve up tracks such as Scorcha and Callin On Me, proving that after decades in the industry, his music only gets better with time. Sticking to his collaboration-over-confrontation mandate, the entertainer invited guest artistes such as Jesse Royal and young dancehall trailblazers Skillibeng and Masicka to join him on stage. Jesse Royal joined Sean Paul on stage to deliver a spirit-filled rendition of their single, Guns of Navarone, while Masicka and Skillibeng united for a fiery performance of Everest.

In a post-performance interview with The Gleaner, Sean Paul said having pushed the message of unity hard with the Live N Living album, he made it his point of duty to invite Masicka, Skillibeng and Jesse Royal to join him on stage in his first performance in over 12 months. He expressed that with dancehall artistes often getting flack for not “working well with each other,” he wanted to use his stage to send the opposite message

“For about three years, I toured with Chi Ching Ching and tried to introduce my audience to him, and since then he has streamed 12 million for his album, Turning Tables, so far and that’s a pretty good sign of how far collaboration can go. It’s good to team up because steel sharpen steel, so big up Jesse, Busy, Skillibeng and Masicka for coming through. There was a great vibe when they passed through and I love the unity that we showing,” he said, expressing that the masses have also shown that they are all for the dancehall camaraderie.

He explained that since the album’s release back in March, streaming numbers have been steady at 60,000 streams per day, a number he says is not often recorded in the genre. “When a dancehall album comes out, the streams are high and it’s very big in the first week, but then by the third week, not so much. Going up with a project which features Dua Lipa is different from going up with artistes like Skillibeng and Intence, who have a big fan base here in Jamaica. But outside (of Jamaica) is where my numbers come from, and so I was a bit anxious to see how it would do, and I feel good about its performance so far. People are consuming the music and it’s a good kick-off. ‘Critically acclaimed’ is a thing that I hear often when they talk about the album, and when people say that it means a lot.”

Pointing out how blessed he feels to return to the stage, Sean Paul told The Gleaner that he had been worried about a recent back injury, but says the pain did not present itself during the performance. “Last week I did have a back pain, and so leading up the event I was kinda nervous about that, but it gave me an ease and I was able to move around freely. The best thing about this show for me was getting back together with the band. I haven’t seen some of the guys in a year and half almost, and it was good getting back.”

Sean Paul: Live From Jamaica was so well received that an encore presentation of the show was aired on Sunday on the Dreamstage online platform.