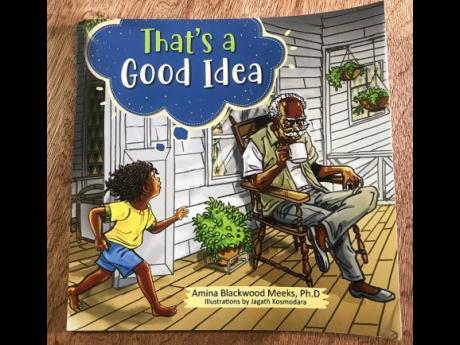 Stephanie Lyew
Written by Dr Amina Blackwood-Meeks and illustrated by Jagath Kosmodara, ‘That’s a Good Idea’ is told through the eyes of a little boy — Johnny.

Acclaimed storyteller and author Dr Amina Blackwood-Meeks pulled on her childhood imagination for her first official children’s book, That’s a Good Idea. It’s a modern folk-tale, inspired by creation and a child’s curiosity about the creator’s purpose in making the earth and all its living things.

“I want the readers to understand that we are all created beautifully,” Blackwood-Meeks, who is the host of The Gleaner’s storytelling podcast Kinteet and Heartbun, said about the book.

She continued, “Look at the characters Johnny and Grandpa, how they are portrayed with skin that shines so pretty and bright.”

Iillustrated by Jagath Kosmodara, That’s a Good Idea presents the storyline through the eyes of a little boy and captures the relationship between young and old as it highlights the importance of language and storytelling traditions. Part of her conscious approach to writing and telling stories, Blackwood-Meeks said, “Is to put in the proverb and riddles passed on through generations and for it to come in context”.

In her interaction with other educators, she has recognised a need for local storybooks that embrace the cultural dialect. “A high school teacher shared a situation with me, having given her third-form students a Jamaican proverb to interpret what it meant. At the time, the meaning was so obvious, but they couldn’t make a correct guess,” she said.

“It goes to show that language is equally important as any narrative,” she added, pointing out that around the Caribbean, islands like St Lucia have a special day on their cultural calendar to celebrate creole. Blackwood-Meeks said Jamaica should consider such a designation in recognition of patois’ power and strong cultural appeal.

That’s a Good Idea is a story the writer has performed across the Caribbean and the world at several storytelling festivals. It is currently available in Columbia, Costa Rica and Mexico — wherein a storytelling foundation assisted her with the Spanish translation. In the various translations, Blackwood-Meeks also made a few adjustments to allow the reader “the nuances of the performance”.

She said, “I have been performing it for at least 15 years to mixed audiences, in terms of generations and cultures and have throughout that decade and a half, worked with young people who have assisted me to put the stories in one place and the academic writing in another place, in hopes that I would one day publish books. And I have done so with this one.”

Reading the first few pages of That’s a Good Idea with my eight-year-old daughter and seven-year-old son had to be done in theatre-performance style, and at the end of the storytime session, there were more questions to answer than what the character, Johnny, asked — much to the delight of Blackwood-Meeks, who articulated, “The first thing is for young readers to believe in themselves and their ideas”.

“I want people to see how beautiful the relationship between the generations can be, while showing how important the animal kingdom is and for them to ask questions of them,” said the animal lover. She said she was influenced by her own parents, also talented storytellers, who had a deep love for animals.

Blackwood-Meeks, who played an instrumental role in the proclamation of National Storytelling Day, which is observed on November 20, said storytelling traditions are still relevant, and she would love for local authors to get more support. Her next children’s book, which looks at National Heroine Nanny of the Maroons through the eyes of a child, is in the final stages of publishing.

“They say we don’t read, but nowadays there is nothing but textbooks for the children to read, and the other thing is local authors are overwhelmed with books from the overseas market. When publishers say the market is small, I ask which market because over 15 Caribbean territories speak English,” she said. “It’s time for our local book stores to run down the books being written and published by local authors; I want them to see how important it is to have books such as this one and for our people to consider what makes a textbook.”

An activity book is being created for That’s a Good Idea, she revealed, which will engage its readers across the world.