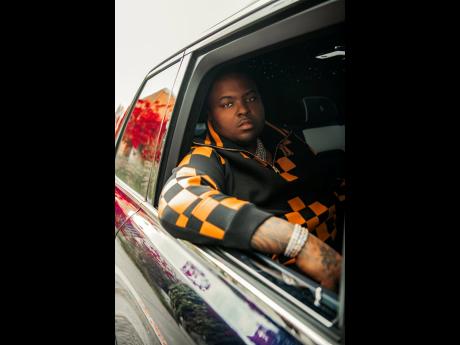 With a renewed sense of and appreciation for life and his career, 31-year-old Kisean Anderson, best known by the stage name Sean Kingston, is on a mission to make his family, fans, and management proud. He has been teasing across social media that he would be releasing new material in six years, and now it’s all coming to fruition. “I haven’t had a record deal since six years ago ... Empire Records just gave me a huge deal. Before I was independent, I was figuring out what I was going to go into, but I was still putting music on my SoundCloud for my real, real fans,” Sean Kingston tells The Gleaner.

With his much-publicised Jet Ski accident, which happened 10 years ago, on May 29, 2011, fans and critics alike had assumed it was the reason for Sean Kingston’s absence, but he revealed otherwise. “It’s crazy seeing people on Twitter and Instagram asking, ‘Where’s the music?’ or saying, ‘We miss you, we miss you’, and I’m like, ‘It’s coming, it’s coming’. But, what happened was, I couldn’t put out no music because I was in deals that I couldn’t get out of,” he shares. “Now, God has blessed me; he brought a manager my way, who took me out of the bad deals – we even had to pay money to get me out of the two bad contracts I was in.”

On Spotify alone, Sean Kingston, who has released hits like Beautiful Girls, which reached number one on Billboard’s Hot 100, Take You There and Fire Burning, was streamed 239 million times by the end of 2020, with an average of 12 million monthly listeners. “I always thank God, fi know seh it is a blessing, fi me go through weh me go through and still deh here,”he said, speaking of his experiences, while promising that his new album will act as a needed form of release. “I am letting it all out in my upcoming album,” he said.

Deliverance, the name of the new album, will be “way more mature” than his previous work, the recording artiste said, and will revolve around the concept of feeling liberated and being able to stretch his creative muscles. “I am excited because I get to show the full diversity and my being [fully] versatile in getting into the album, that’s why the album is so titled,” Sean Kingston said. With the first single, Darkest Times, featuring Chicago rapper G Herbo hitting digital streaming platforms today, the artiste talks about missing opportunities to perform globally and to travel home, having a special feature for Jamaicans on the album and what’s on his playlist in this week’s Five Questions With.

What exactly is the story behind ‘Darkest Times’?

It represents me going through my darkest time. Even the mention of COVID-19, it is still darkest times, so whatever people are going through, which is COVID-19 for me and COVID-19 for the world. With the situation of not being able to put out music for my fans, because I was in bad contracts and stuff like that. Darkest Times just represents all the dark times people go through in their life and having that woman who’s going to be there for you or just somebody there to hold you down. It’s personal, but I have more personal songs on the album that get deep into my life and my story. This one is more of a feel-good [song] to start off the vibe and get the summer up. My homey G Herbo brings a whole different dynamic to the track too. Every three weeks is going to be something new, and for Jamaica, I have something very special on there – something people won’t expect – it has a huge Jamaican icon artiste on there.

Did you have any fears about not being able to release music as freely as you’d like to, especially how it would affect your relationship with your fans?

Yeah, yeah, yeah, yeah … facts! Especially because it would have been so long, but if someone can stream that much times as we said before, it still shows people someone has a hit factor, they still wonder what’s going on with Sean. With a great team, great label and PR, a whole team like that, people are just going to come right back on, and it’s going to be like I never left. People will always be like, ‘[Am I still] putting out music?’ but it’s like everything happens for a reason to build my story.

How would you say your sound has changed or matured since your last album, ‘Back To Life’, in 2013?

Well, I am older, and now I can talk about more things. When I was younger, I was writing from the space of what I was going through [at that age], but it was innocent. Now I been through a lot and can relate more. I can paint my story as being older and experiencing different relationships, travelling around the world five times and seeing a lot of stuff. I think the melodies and the pockets are different, the concepts [too]. It’s all driven differently. It’s going to be hitting them from various angles.

How have you been coping throughout the pandemic?

The pandemic was both good and bad; that’s what I tell people. I guess, for me, it was different because I got to bring all my celebrity friends together to create my upcoming album, which is something that means a lot to me. I don’t think the album would have as many features on there [if it was not for the pandemic], with everyone home or in one spot in LA. At the same time, I missed out on US$1.8 million worth of shows. I also say to myself that God had a bigger plan for me than me just doing shows with my old songs or with my old hits … I gotta have new music out there.

What’s on your reggae-dancehall playlist, and is there anyone on the Jamaican scene you’re looking to collaborate with?

I listen to Skillibeng, the legend Vybz Kartel, Squash 6ix Gad, Tommy Lee Sparta, so I am still in tune with what’s going on, but I kinda more mix it up from culture music to dancehall and reggae and then hip hop. Skillibeng and I are actually friends, and he is the only new artiste that I would say is my favourite pick.