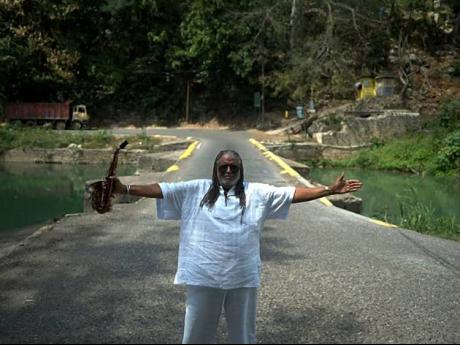 Contributed
The single and album were named ‘Flat Bridge’ following a recording session during a period of heavy rains. “The engineer is from Linstead, and when he reached the studio, he commented, ‘Bwoy nutten can’t pass Flat Bridge.’ And it was just a studio vibe after that, and we ended up calling the song ‘Flat Bridge’,’ said Dean Frazer. 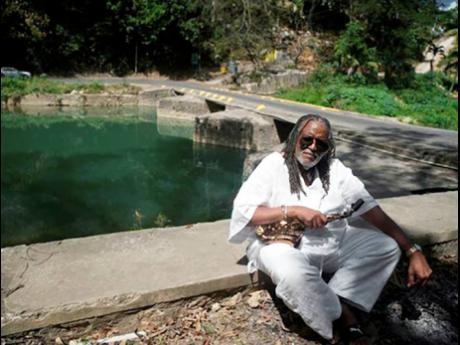 Contributed
The single and album were named ‘Flat Bridge’ following a recording session during a period of heavy rains. “The engineer is from Linstead, and when he reached the studio, he commented, ‘Bwoy nutten can’t pass Flat Bridge.’ And it was just a studio vibe after that, and we ended up calling the song Flat Bridge,” said Dean Frazer.
1
2

Songwriters will agree that the title of songs can sometimes come from unexpected places or situations. Take, for example, saxophonist extraordinaire Dean Fraser’s latest offering, Flat Bridge, named after the bridge in St Catherine that crosses the Rio Cobre.

Frazer actually laughed and paused before sharing how the instrumental piece was named. “When we were recording in studio last year, the island was experiencing some rough showers, and the river was in spate. The engineer is from Linstead and, when he reached the studio, he commented, ‘Bwoy nutten can’t pass Flat Bridge.’ And it was just a studio vibe after that, and we ended up calling the song Flat Bridge. As a matter of fact, quite a few of the song titles on the album come from interacting with people who came to the studio while we were working,” Fraser stated.

Flat Bridge, produced by Fraser and Tad ‘Junior Tads’ Dawkins, is the first single from the album of the same name which will be distributed by Tad’s Records. With this album, the multi-award-winning saxophonist continues to live a dream. Fraser has long advocated for the return of instrumentals to reggae music, which has some iconic pieces such as Death In The Arena, Rockfort Rock, Double Barrel, Heaven Less, and MPLA, a militant salute referencing freedom fighters in Angola. During the 1990s, he was among a cadre of musicians, including Dwight Pinkney, Maurice Gordon, Tony Green and Mickey Hanson, who all released instrumental albums.

“For this album, it’s all live instruments with horns … . Everything. A few dub mixes and a little improv here and there. This is an authentic Jamaican album. We thinking real reggae music, not trying to be American,” the 1993 Musgrave Medal recipient for his service to music said proudly.

Another positive for Fraser on this project is the opportunity to work with talented young musicians who are the future of reggae. He explained that, having been the recipient of either tutoring and/or encouragement from legendary musicians such as Alfred ‘Babe’ O’Brien, Herman Marquis, Jackie Jackson, Tommy McCook, Sonny Bradshaw, and Glen DaCosta, it is his duty to pass on the baton.

“I was just a little 13-year-old youth a run up and down in Trench Town, but it was amazing how there were so many great people who whispered in my ear about the music and wanted me to get it right. There was Herman Marquis, him don’t speak loudly, but he was always ready to give guidance. They gave me the confidence to believe in me, because I, myself, didn’t think I could be a great sax player. We [are] not going to be always here, so it is only my duty to educate this generation. Me nuh ‘fraid fi pass on all that I know,” a passionate Fraser told The Gleaner.

Currently, he is the cheering squad for musicians Okeil McIntyre and O’Shane Love. “Okeil is a trumpet player from MoBay, and, for me, he is the new face in horns. He is young, willing to learn, and he is learning fast. Oshane is a master at the tenor sax, a really fantastic player. It’s refreshing to have two other horn players who are not afraid to try something new. I am trying to get them totally involved in thinking about music not just from up north, but their own music. And most importantly, not to shun their own Jamaican music,” Fraser stressed.

Flat Bridge, the single, was released on all digital platforms on May 7. The full album is scheduled for release on June 4, 2021.