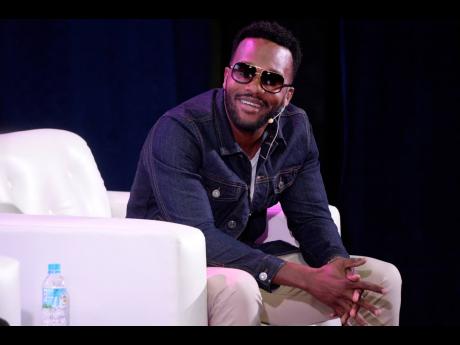 File
‘Caterpillars Can Fly’, a collaboration between dancehall and reggae artiste Agent Sasco and his daughter, LC, was released on Friday to rave reviews.

In their first father-daughter musical collaboration, Agent Sasco and his 9-year-old daughter, LC, have produced a moving single that is today being dubbed by music lovers across the globe as a ‘children’s anthem’. The track, Caterpillars Can Fly, was released on Friday and could not be a more fitting curtain closer for Child’s Month, even making it to all digital platforms on the day observed as National Children’s Day. Inspired by Alvin Day’s best-selling novel, If Caterpillars Can Fly So Can I, Sasco and LC’s single sends the motivational message that though one was born without wings, flying is not impossible.

In an interview with The Gleaner, Sasco said that having read Alvin Day’s life-changing book, he realised that he shared similar principles to those revealed in the text. This, he said, was added motivation to produce a single he hopes will be as inspiring as Day’s work. “The book really reinforced a lot of the principles that I already have been exposed to, and principles I try to live by. To see how they have also been employed in Mr Day’s journey was added motivation to continue along that path,” he said.

Inspired by the book, Sasco said he wanted the song to have the same impact. “The real purpose of the song is to be a kind of musical summary of the book. I would hope that it can evoke the kind of inspiration and empowerment that the book delivers,” he said.

Since its release over the weekend, Caterpillars Can Fly has earned a boatload of positive feedback on YouTube. Users have heaped praises on Agent Sasco, who many have described as a true musical gem. They’ve also been reflecting on the synergy Sasco and Lauren have on the track and have described the fusion as “sheer perfection”. “Wow, a beautiful, heartfelt song! I hope all young children and adults listen too. We can all fly and achieve our dreams! Sasco, you and your daughter are a perfect combination for this song,” user PrettyGirl Jay wrote.

Marlon Burke, Agent Sasco’s manager, shared similar sentiments. “Him being her father and him having his own studio always presented the opportunity for them to record, but I think this was the perfect way to do that. I can’t think of a better selection of song or a better culmination of events, for this song to have been their first step through the doors of them doing something together,” he said.

Burke said the collaboration and production came together seamlessly. “Everything from the lyrics to the melodies to the lyric video just came together in the most beautiful way, and actually hearing the finished product gave me goosebumps,” he said.

Describing Sasco as an exemplary parent, Burke said he admires and respects how the entertainer has managed to mould the talents of each of his children. “It’s a joy to watch the changes and transition between himself and his family. Each of his kids have their own unique thing about them, and he is great at allowing them to be who they are while guiding them and offering direction. He and his wife are raising some special children,” he said.