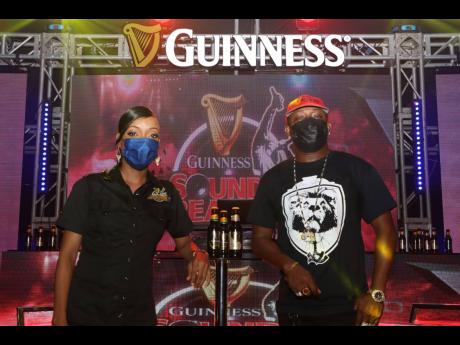 Guinness Sounds of Greatness (GSOG) is set to make a comeback with the first clash of the competition scheduled for May 28. Now in its 13th staging, the series will feature musical battles between some of Jamaica’s hottest sound systems as they compete to win $1 million and bragging rights.

Guinness Brand Manager Lyshon Davis says GSOG 2021 will be epic. “We are excited to once again bring together a world-class set of musical clashes to the dancehall scene. This year, all shows will be virtual with some truly special guest performances. It was important for us to find a way to bring GSOG to the people and create a safe space for dancehall to still thrive in this time. A virtual staging means we can follow the protocols and ensure the safety of everyone involved while still bringing high energy entertainment to the fans.”

Popular sounds, Di Unit and Fire Explosion, will go head to head at the turntables in the first clash. The remaining matchups will see High Grade International and Naz Gurl Power facing off on June 4; Road Karma and Rich Squad in a clash set for June 11; and Black Blunt and Nuh Grain Sound facing off on June 18. The semi-finals are scheduled for June 25 and July 2, with the grand finale airing on July 9. Hosted by Badda Bling, sound systems and selectors will be competing in three segments - the 10-minute juggling round, the 10-minute themed segment, where sounds will be given a theme on the spot, and finally, the 15-minute ‘Tune fi Tune’ segment.

Former GSOG winner and present judge, veteran selector, Ricky Trooper, says competing sounds should bring their A game. “As a past winner, I know what it takes to be crowned GSOG champion. All sounds need to come strong in all the segments. We will be looking out for creativity, skill, showmanship and, of course, musical knowledge. It’s gonna be a great competition, and I salute Guinness for always supporting the culture,” said Trooper. Other judges for the clash series will be Keith Walford, founder of the iconic Bass Odyssey, and dancehall veteran Admiral Bailey.

GSOG will be live-streamed on a number of platforms, including the Guinness Carib Instagram and Facebook pages @GuinnesssCarib, and on the Guinness Sounds of Greatness YouTube Page.