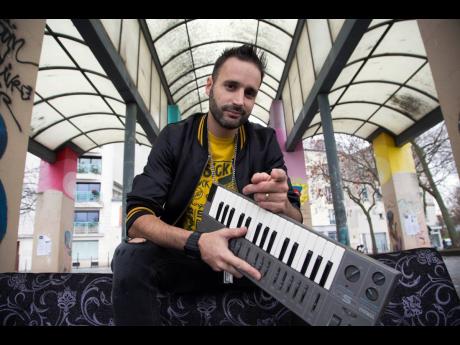 Contributed
French beatmaker Manudigital poses with another one of his instruments, a model of the Yamaha keyboards. 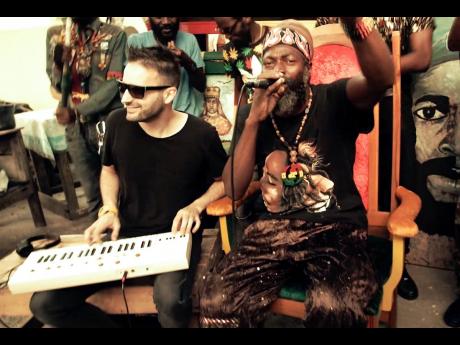 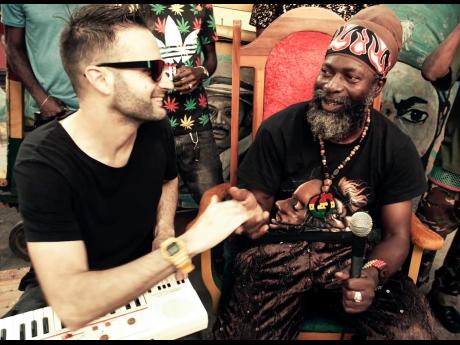 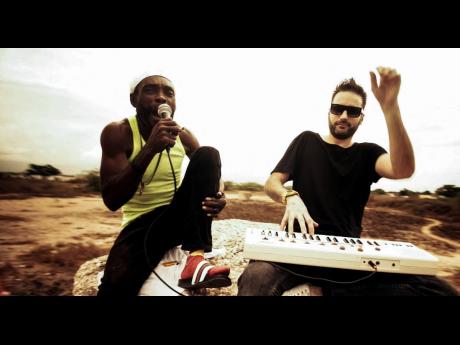 Contributed
The Casio MT-40 keyboard is responsible for the powerful sounds that serve as the backdrop for Devon Morgan's songs 'hitting like a timebomb'. 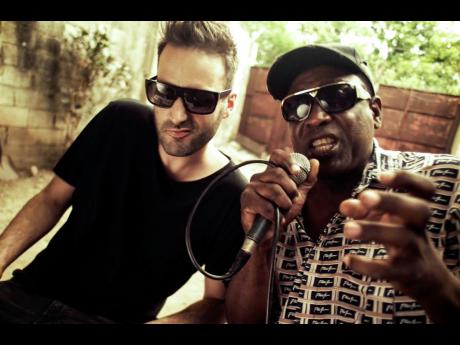 Contributed
Manudigital (left) has a deep respect for the vintage voices of the reggae genre, like Peter Metro, who, seen here, was part of the Kingston jam sessions.
1
2
3
4
5

From the vibrant streets of Kingston, Jamaica, to les ruelles animées (the busy alleys) in Paris, France, reggae music has earned its revolutionary title, and now more producers, singers and songwriters are experimenting with the original sounds of the genre. For French beatmaker Manudigital, reggae was the genre that resonated the most with him as a child. He comes from a family of musicians, including his two guitarist brothers, who supported his passion for reggae. In 1994, the siblings started the Jahrmony band, which was the springboard for a then 13-year-old Manudigital’s exploration of live performance and the importance of the sounds generated.

“For me, it is important to keep this cultural bridge between Jamaica and Europe, and especially France, in order to expose the culture to the greatest number of people,” he said, adding that while the sounds of reggae are popular, many are unfamiliar with the originators. “Here, there are many who know a bit about the music but don’t necessarily know the people who created it,” he said.

Manudigital was born Emmanuel Heron in 1981, the same year Casio released the Casiotone MT-40 keyboard, which would become a benchmark in reggae music. It is deliberately the instrument of choice for Manudigital’s project dubbed Digital Kingston Session, featuring Jamaican artistes, he said, because of the history behind its role in creating one of the genre’s breakthrough rhythms. “Being the keyboard that Noel Davey had discovered the sounds to create [the] Sleng Teng riddim recorded at King Jammys Studios in the 1980s [cemented by Wayne Smith’s Under Mi Sleng Teng hit single], it is a fundamental part of the digital reggae culture. So, when I come to Jamaica to meet the artistes of that time, with this synthesiser, everything comes together easier,” he explained.

The producer further explained that the demo of sounds is already in its preset. The old adage ‘don’t judge a book by its cover’ is true for the Casiotone MT-40, which has a built-in speaker above the main keyboard that is divided into sections for power, volume, rhythm, and effects, including 22 instrument sounds and six preset rhythms listed on its body. At first, with its minimalistic design — a cream-coloured plastic body — it was considered cheap (costing about US$150) and not capable of doing much.

However, Davey, a keyboardist, proved differently. The MT-40’s ‘rock’ preset would inspire a ripple effect that forced reggae and dancehall into the digital age and influenced many other producers. In his 2015 interview with The Gleaner, Davey had admitted that he originally had his eyes on a far more advanced synthesiser that carried a heavier price tag, but was gifted with the Casio machine, which, if classified based on technical features, would not be called a synthesiser. Nevertheless, it earned its cult status among musicians worldwide years after it was introduced partly, because of the impact of the Sleng Teng riddim.

“The MT-40 can play all kinds of rhythms and is the skeleton for a lot of music from that era, so it is also very credible to have this sound and these artistes who put their voice on it. It’s, above all, a music that has spoken to me for years, and it seemed natural to return to the roots of digital reggae,” said Manudigital.

With this machine, Manudigital is leading the way with the Digital Kingston Session, which was conceptualised after hours of freestyle sessions at parties around Paris and evolved into making videos in the alleys with French artistes like Pupajim and Naâman, as well as Scottish act Soom T and British ragga artiste General Levy. It would eventually take Manudigital to Jamaica, where he recorded the first volume with Josey Wales, Junior Cat, and General Degree. He recently released the second volume of the jam sessions on vinyl, three years after volume one.

Recording the sessions for the first volume of the Digital Kingston Session “was almost easier” for Manudigital, he said, because the artistes were not familiar with him and were hardly familiar with his work. “I had done previous work with artistes such as Papa Michigan or Lt Stitchie; for other acts, it was very spontaneous, and the sessions were very easy to set up.” He continued, “The second time around was different because these artistes knew my work, and when you start to attract several million views on YouTube, people have their misconceptions and judgements about you, but it was equally exciting to work on both volumes.”

The latest volume features reggae-dancehall star Capleton and Junior Cat, and more underground but no less talented artistes such as Devon Morgan, Peter Metro, Jigsy King or Bunny General. He urges people to listen, because “it is a way to trace the history of digital reggae music, as there are legendary artistes who have marked this period with the typical MT-40 sound.” He also suggested that through his interactions which are recorded on video, sociological studies can be made. As a bonus, Manudigital included sessions recorded outside Jamaica, one in Brooklyn with Red Fox, and the other in Paris with English MC Deemas J, who has been sharing the stage with the beatmaker-producer on tours across the work.

“It was organic that Deemas J (though not of Jamaica) be included, and even Red Fox in New York, in the same way that the sessions with Derrick Parker in Mexico City or Queen Omega in Trinidad on volume one were added. The digital [street] sessions with the Casiotone MT-40 have become a tradition for me, and I must add that the COVID-19 crisis has made it challenging, as I prefer face-to-face,” he shared. “I am forever a fan of reggae music and Jamaican culture. Each time I meet artistes who are not of my generation, they tell me anecdotes of times or songs that I listened to thousands of times; so each meeting was very enriching moments. Like with Lt Stitchie, Admiral Bailey, or Josey Wales, all these exchanges were incredible and will remain engraved in me all my life. Also, each time a legend passes, it is very difficult for me, as was the case with the death of Pad Anthony.”

Specialising in digital reggae, Manudigital wants the new generation of recording artistes and the fans to become re-acclimatised to the sound which some dub as old-fashioned.

“I started playing reggae as a bass player, then 25 years went by, and it never stopped. The sound is constantly transforming and can be modernised while maintaining its authenticity,” Manudigital said, adding that he is currently “working on a project with locally based Rastar Records for the Manudigital Meets Rastar All-Stars showcase album.”

“For the moment, three singles have been released: Gregory Issacs, Yami Bolo, Half Pint. The project will [have] about 12 tracks, with exclusive productions. It’s an honour for me to be able to work with artistes of this stature and who have contributed to Jamaica’s rich musical history. There will surely be other volumes to come, but it remains a surprise. To be continued,” the producer concluded.