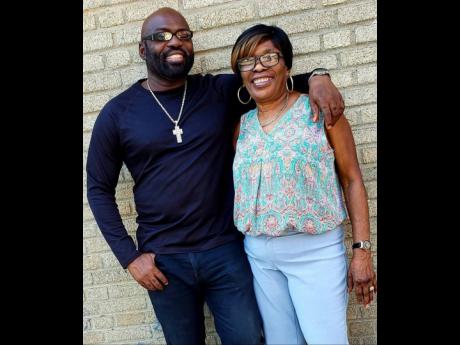 Contributed
Carmen ‘Mama Carmen’ Farquharson (right), the mother of Reggae crooner, Richie Stephens, is getting ready to release a solo single produced by her son and Othniel Lewis.

They call her Mama Carmen, and all who know her are aware that she is an amazing singer who is always singing, simply for the love of it. So it is not really surprising that Carmen ‘Mama Carmen’ Farquharson, the mother of crooner Richie Stephens, has done a fantastic job on her solo single, They Called Her Moses, a track produced by her son and Othniel Lewis. The only surprise, perhaps, is that Stephens took his mother into the studio for the recording session.

Although they have done two mother-son recordings in the past, Stephens is very protective of his mother and views privacy as premium in his familial relationships. “I know for a fact that there are other artistes whose mothers can sing, but there is a good reason why we don’t record our mothers. The music business can be harsh at times, and we, as artistes, know the score and want to protect our mothers from all the negatives that sometimes come with it. My mother was a big woman when I got my real break in the music industry, and it wasn’t until long after that we did a song together. We even did a mini-tour once to Cayman, Canada, and the US because we had this song together that did well in some places. But there are also some physical things that you have to consider, like the long walks through airports sometimes from one terminal to another, hustling to catch a flight before it departs, and that is not what I want for my mother,” he said.

But as Stephens shared with The Gleaner, They Called Her Moses is one of his all-time favourite songs, and whenever he listens to it, it’s his mother’s voice that he hears. “My mother is a foundation singer, my grandmother was an awesome talent, and I am told that my great-grandmother was the best of all. I asked my mother to sing this song because I know she would do a great job, and I want her to really hear her voice on record. She agreed, and this is the result,” a proud Stephens stated.

Mama Carmen and her son have similar tastes in music, and They Called Her Moses is also a song that she likes, so she decided to give it a try, recording at their home studio. For her, the sessions were “great” as she knows only too well that her son is a perfectionist, having recorded songs with him in 2002 and 2006. And while Richie agreed that the recording sessions were, in fact, quite joyful, he admitted that there were a few times when Mama Carmen started to get edgy after a set of instructions, and he had to remember that “this is my mother” and simply shut his mouth.

Amused by his comments, Mama Carmen, who is her son’s biggest fan, insisted: “The studio sessions were great. I did everything my teacher [Stephens] told me to do. I followed all his instructions well, and I am very happy at how it turned out.”

She is also elated over how well her son turned out, and listening to them, it was clear that the admiration was mutual. “I am so proud of him, and I was glad when he decided to go into singing for a career. My proudest moment was when he was signed to Motown Records,” Mama Carmen shared with The Gleaner.

Although Stephens knows his mother well – “a long time me and my mother a par” – he still marvelled at how much alike they are vocally. “I realise even more that she is where I get all my talent from. Mama Carmen came prepared in the studio, and she has a great ability to hear sounds and reproduce them exactly, effortlessly. I know exactly how to pitch her, and she has that way of singing in that smooth and breathy voice,” he said, heaping praise on mother and protégée.

With vocals sounding crisp and fresh, Mama Carmen belts out the notes on point as if she spends her days rehearsing in studio. “My mother has never stopped singing, so in a sense, she is always practising,” was Stephen’s explanation.

The duo had so much fun recording this track that another, titled Mother and Son, is in the pipeline, and wherever it leads, Mama Carmen is on board.

They Called Her Moses will be officially released on June 25