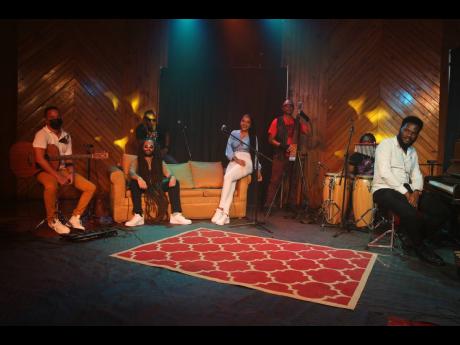 Contributed
Alborosie, along with members of his Shengen Clan Band, performed some of his international hits.

Coming off the heels of his new album, For the Culture, released on June 4, Italian Reggae Ambassador, Alborosie, was the first act on the couch for season four of the Harry J Live Couch Series. The virtual jam session, produced by Tara Johnson, was released yesterday on the Harry J YouTube channel.

Comfortably seated on the golden couch in the Harry J Recording studio with his dreadlocks touching the ground, Alborosie, along with members of his Shengen Clan Band, performed some of his international hits such as Diversity, Rasta Anthem, Jah Jah Blessings, Herbalist and Kingston Town in a captivating 20-minute set.

“I chose to perform my classics for the couch series, staying true to the roots of reggae which is what the Harry J Recording Studio is known for,” he said after his performance. “Good music is healing, so that is what I will always be producing and performing for my fans, especially in these unprecedented times,” he added with a smile, while touting the relevance of his song Unprecedented Times.

Johnson said Alborosie’s performance was the “perfect start to the season”. “Having an established act like Alborosie on the couch is such an honour! As a musician, producer, singer and songwriter, his work is not only inspirational; we believe that his calm yet riveting performance is the perfect start to this season as we continue to navigate a pandemic where physical performances are rare,” she said.

The executive director of Harry J Records promised an eclectic blend of emerging and established acts for the new season, which, according to Johnson, has gone acoustic. “We started out with three episodes back in April 2020, but this season, there will be 10 episodes being released,” she said. Performers will include Truvi, Projexx, Monifa and Sanjay.

In honour of the rich reggae history of the Harry J Recording Studio, as the place where Bob Marley and The Wailers recorded their first five albums; as well as an ode to the Harry J Catalogue (which includes reggae legends such as Bob Andy and Marcia Griffiths), episode of the couch series also now features a performance of a song from the Harry J catalogue or a song that was recorded at the studio.