‘Round-robins embedded in our culture’ - Clarendon promoters want a break 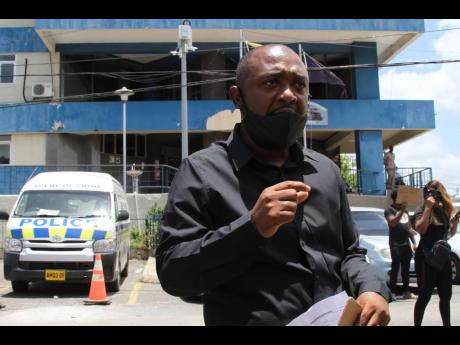 Nathaniel Stewart
Denton Atkins is president of the Clarendon Promoters Association which led a peaceful demonstration outside the May Pen Police Station in the parish last Sunday. 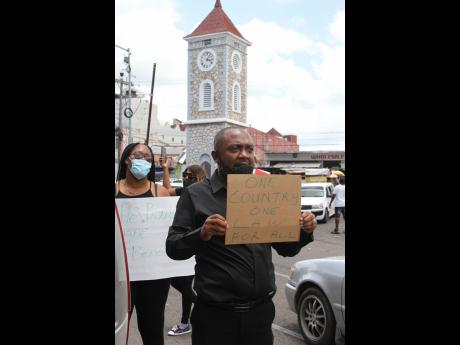 Nathaniel Stewart
Denton Atkins is protesting what he calls the ‘callous treatment’ of those who depend on the staging of round-robin events to eke out a living.
1
2

Event promoters in Clarendon, armed with the belief that unity is strength, have formed an association with the aim of securing a seat at the table to air their grouses. Denton Atkins, president of the group, which calls itself the Clarendon Promoters Association, led a peaceful demonstration outside the May Pen Police Station in the parish last Sunday.

Atkins secured media coverage which he welcomed, but he isn’t stopping there. He has several bees in his bonnet, but the one which is buzzing the loudest speaks to the “callous treatment” of those who depend on the staging of round-robin events for a livelihood. He explained that round-robin are partner-driven events, which sees promoters forming groups of sometimes up to 70 persons, with each person getting a draw weekly, and most times staging an event at a popular bar. He pointed out that these sessions have a name, depending on the day of the week.

“We have Breakfast Sundays, Marco Dean Mondays, Quick Cash Tuesday, Different Flavour Wednesdays, and so on,” he explained.

Atkins added, “This sector that is so firmly embedded in our culture and we cannot exclude them. They, too, have their families; they are breadwinners. Ninety per cent of them are dependent on their round-robin parties, but unfortunately, because they are not registered as a business, they are not considered among the ‘established players in the industry’. But these round-robin promoters, just like the big players, go the legal route of applying and paying for permits to host their events. The only difference is that for many of the bigger promoters, the events that they stage are not their livelihood. Since the lockdown, these small promoters have been struggling. Every other industry is allowed to put protocols in place, but not entertainment,” Atkins told The Gleaner.

The association president said that in his quest to find a workable solution, his group met with the police shortly after they established themselves in August 2020. The promoters association was formed in response to the action of the Clarendon police against local promoters. “We met with them in their space because we needed to be better informed about the dos and don’ts. I also had a meeting [with the] secretary-manager of the Clarendon Parish Council. I realised that there are some establishments and attractions where persons can gather, so I wanted to find out why. The secretary-manager explained that there are different licences that govern venues; therefore, certain restaurants and bars are allowed to operate their businesses based on the parameters of those licensed. Of course, all this is subject to the prescribed protocols in place. I then made enquiries and found a venue that would allow us to use their licence, but that too proved a problem,” he stated.

According to Atkins, he was at one of these licensed venues, with all protocols being observed when the police came and locked it down.

“I was at there with my kids when the police came and raided the venue. We were sitting and eating; the tables were all spaced out as required, and there was background music, no dancing. The female officer in charge insisted that it was a party. So, we are now asking what is the definition of a party? We cannot treat these people like this. It is having serious implications,” an emotional Atkins said.

ARRESTED FOR AN EVENT YOU DIDN’T HOST

He is imploring the Government and the police to take a seat beside the have-nots and pointed out that members of his association have been called in by the police to be arrested for events at which they were not even present. “Yes, it happens. The police call the promoter and say that their intelligence tells them that it was their event. And if the police calls you, what you going to do? I advise the promoters to go to the police and make sure that when they go to court, they plead not guilty,” he said.

Atkins insists that all he wants at the end of the day is for equal treatment to be given to all promoters, regardless of size or perceived importance. With the announcement on Tuesday that on June 22, Prime Minister Andrew Holness will announce the protocols for the reopening of the entertainment sector, Atkins said he is keenly interested in what will unfold.

“I certainly expect fairness and that small promoters will be considered. I would hope that round-robins will be given a chance. We have proposed to the police in Clarendon how the event can be structured, and they understand, but the police have to follow the orders from their superiors. We all have to survive and learn to live within the protocols put in place by this pandemic,” he said.

Minister of Culture, Gender, Entertainment and Sport Olivia Grange said on Tuesday that the resumption of the entertainment sector will be gradual and that capacity limits and the use of authorised venues will be considered. A list of proposed venues include Independence Park, Trelawny multipurpose stadium, Port Royal entertainment zone, including Fort Rocky and Fort Charles, as well as the Seville Heritage Park.